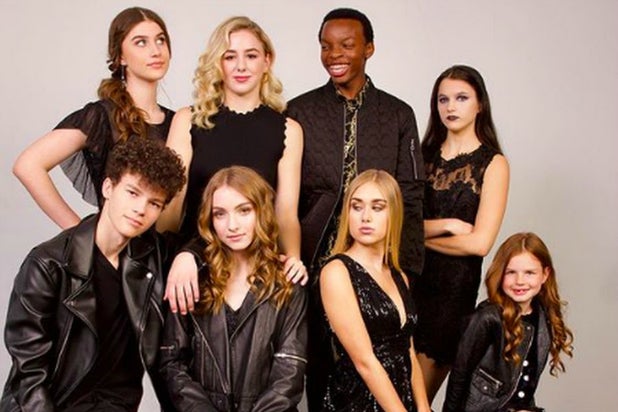 The opening credits of Ilyssa Goodman’s “Next Level” are, perhaps, the most interesting thing about it. They begin with the credit for the producer — and when was the last time you saw that in a theater? — and then work their way backwards to the cast, crew and director, as if to say that the fact that this movie got made is, itself, the most noteworthy accomplishment of all.

“Next Level” is a song-and-dance drama about a summer camp for teen enthusiasts of this business we call show. The audience is informed, in no uncertain terms, in the movie’s second scene, that this is one of the most prestigious organizations of its kind in the country. But we are informed in literally every other scene that the organization employs only two people and is taking up space in a disused corner of a community-college campus.

The film features an ensemble of young actors, but our focus is on Kelly Hatcher (Lauren Orlando, the online series “Total Eclipse”), who has been kicked out of many other camps because she’s such a maverick renegade and nobody knows what to do with her. Sure enough we quickly learn, over the course of “Next Level,” what makes Kelly such a dangerous influence on the other kids: She cares about the feelings of others, she doesn’t let the spirit of competition ruin her attitude, she’s got lots of talent, and she doesn’t break any rules. Kelly is so edgy she’s practically a sphere.

Kelly is, at least, a sharp contrast to her roommate Cindy Stallings (Emily Skinner, also of “Total Eclipse”), who has earned the camp’s coveted “Miss Next” award three years running, and is determined to make it a clean sweep this summer. She’s mean to her mother, she’s judgmental of her friends, and she somehow gets away with bizarre low-concept pranks like turning on the house lights in the middle of Kelly’s performance. Which, as you can imagine, completely derails her confidence because, um, yeah, those are indeed some additional lights.

Meanwhile, the kids from the basketball summer camp across campus are here, and they’re going to create quite a lot of conflict by, um, showing up and being polite, apparently. One them, Travis Perkins (William B. Simmons III), even gets to open their big show in the middle of the movie, despite the fact that he’s not part of the dance camp, and we never saw him ask to do that or rehearse or anything.

Gradually, Kelly forms an innocent romantic attraction to a not-very-good basketball player named Connor Olson (Hayden Summerall, the online series “Chicken Girls”), but Cindy gets in the way of that, too. Kelly and Connor also find themselves competing against each other in a dodgeball game, boys against girls, in which the girls will get to give the boys fabulous makeovers if they lose.

And frankly, it’s hard to say what’s weirder — the fact that the movie plays the makeovers like a joke even though the girls clearly went overboard and made them all look fabulous, or the fact that the boys are still wearing the makeup the very next day, as if none of them could figure out how to take it off. (Sleeping in makeup is bad for your pores, dudes.)

“Next Level” is amateurish, and there’s no animosity behind that critique. It’s just what we’ve got. With the exception of Brook Elizabeth Butler (also of “Chicken Girls”), who plays Cindy’s talented but overstressed underling Becky, most of the cast never fully inhabit their characters. They seem to be rattling off their lines and coasting on personality, and some of them have more engaging personalities than others. So be it. It’s hard to get upset about a production full of high schoolers looking like a high school production.

More disappointing are the film’s production values, which undermine the story at every turn. It seems as though the solution, when it became impossible to back up the movie’s claim that this is one of the fanciest summer camps ever, was to double down and try to gaslight the audience into believing it anyway — even though shifting the film to a bunch of underdogs in a lower-rent environment would have been simpler, given them more rooting interest, and actually matched the locations where the movie was actually shot.

Ordinarily in a movie like this, filmmakers would rely on the performance pieces to compensate for any deficiencies in the production. Song-and-dance movies can get by just fine if the songs and dances are amazing. But “Next Level” sets all of its numbers on the exact same stage, with little variation or flourish. A few of the numbers try to make the most of the environment, but mostly it’s just a bunch of kids singing against a dark backdrop or on some benches. Even if the songs were great (they aren’t), and even if the choreography was amazing (let’s just call it “mixed”), this would be a letdown.

“Next Level” is borderline inept but it’s got a good heart and its ultimate message, that art gets better when the people who make it better themselves, is unassailably humane. It’s got all the cinematic bravado of an expensive high school A/V project, and like a school project, it’s easy to root for the young people involved. They’re getting out there and they’re making a movie, dang it! Good for them! Not good for us, of course, but good for them.