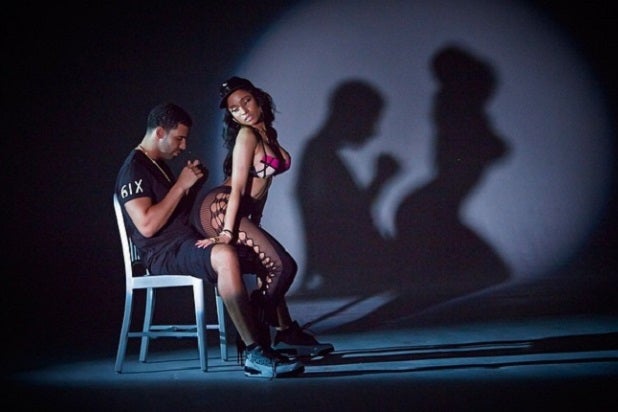 If this whole music thing doesn’t work out for Nicki Minaj, she could probably make a pretty good living at the local strip club.

Rapper and former “American Idol” judge Minaj, whose derriere has loomed large over the internet for much of the summer thanks to the racy cover art for her single “Anaconda,” got the week off to a scandalicious start on Monday with a batch of photos from the song’s upcoming video.

“About to post some ‘interesting’ pics from the Anaconda video shoot,’ Minaj tweeted Monday before releasing the images.

“Interesting” is one way to describe the pictures, which depict Minaj pulling her best champagne-room moves on rapper Drake.

Minaj placing her hand on a part of Drake‘s anatomy in a way that would probably be frowned upon by most reputable strip clubs.

Classy? Depends on your perspective. But it’s certainly a welcome distraction from the troubling news coming out of Ferguson.

Until then, dig into the vava-voom of the pictures.