Nicki Minaj and her husband Kenneth Petty were sued on Friday and accused of harassing and intimidating a sexual assault victim.

Jennifer Hough accused Petty of rape in 1994 when they were both 16. According to the New York Times, Hough accused Petty of leading her into her home at knifepoint and raping her. A spokeswoman for the Queens district attorney’s office told the Times that Petty was arrested and charged with first-degree rape, ultimately pleading guilty to attempted rape and serving four and a half years in prison.

The new lawsuit says Hough and her family members received direct and indirect threats from people connected to Minaj and Petty to get her to recant her accusation. The lawsuit claims she was harassed and intimidated shortly after Petty was arrested in 2020 for failing to register as a sex offender in California. 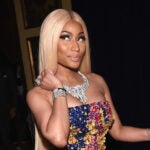 The lawsuit says that Hough was offered $20,000 in exchange for a prepared statement recanting her accusation against Petty, while other members of her family claimed they would receive a payment of $500,000 if she wrote a letter taking back her claim. It further claims that she received a call directly from Minaj but that within days of their conversation, she and her family received an “onslaught of harassing calls and unsolicited visits” from people associated with Minaj and Petty.

Lawyers for Nicki Minaj and Kenneth Petty did not respond to TheWrap’s request for comment, though a lawyer for Petty declined to comment to the New York Times.

Hough, in a Daily Beast report back in March, detailed many of her accusations against Minaj and Petty that are described in the lawsuit.

Hough says that she has not worked since May 2020 due to her depression and fear of additional harassment and threats and is even living in isolation out of fear of retaliation.