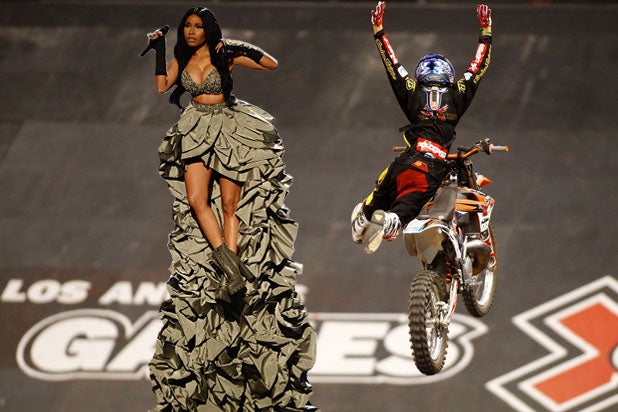 Nicki Minaj is about to get even more extreme.

Following her recent appearance on ESPN’s “SportsCenter,” the Grammy-nominated hip-hop star will headline the X Games in Austin, TheWrap has exclusively learned.

Minaj will perform at ESPN’s annual action sports event, which takes place June 4-7 at the 1,500-acre Circuit of the Americas in Austin, Texas, on the new Super Stage.

See photos: The Top 40 Best and Worst Actors Playing Musicians Before ‘Get On Up’ (Photos)

“I look forward to channeling the energy and spirit from the X Games into a performance Austin will not forget,” said Minaj in statement to TheWrap.

Other acts set to perform on the smaller Sound Factory stage powered by KUTX are Talib Kweli, Pennywise and Deltron 3030. Additional headliners and musical performers will be announced at a later date.

“Having Nicki Minaj headline one of the nights of X Games Austin is going to be really fun,” said Tim Reed vice president, X Games. “We still have other headliners to announce in the upcoming months but the mix of Nicki Minaj with world-class athletes will make for a must attend event in Austin.”

Kanye West led the pack at the 2014 X Games in Austin, blowing away the audience with renditions of “Black Skinhead,” “Jesus Walks” and “Mercy.” The Flaming Lips, Pretty Lights, Dillon Francis and Gary Clark Jr. also played throughout the event.

After over a decade in Los Angeles, the X Games summer event moved to Austin — which is also the host city of SXSW and Austin City Limits — in 2014. This year’s enhanced sport, music, gaming and festival lineup will kick off with Moto X Step Up in front of the capitol building in downtown Austin.

Tickets for X Games Austin will be available for purchase beginning Friday, Jan. 23 at 4 p.m. CT at www.ticketmaster.com/xgames. Three-day tickets start at $109.

ESPN and ABC will televise a combined 24 hours of live X Games Austin competition, which will also be accessible via WatchESPN to subscribers of affiliated providers. Additional coverage of sports and music will be carried on ESPN3 as well as the latest coverage across ESPN digital platforms, including XGames.com, X Games app, X Games pages across Twitter, Facebook, Instagram and more.

Additional information on all X Games Austin 2015 events will be forthcoming on www.xgames.com for fans or on www.espnmediazone.com for media only. For more information on Nicki Minaj, please visit her website http://mypinkfriday.com.