The final trailer for co-writer and director Guillermo del Toro’s new film “Nightmare Alley” has been unveiled, and it puts the focus squarely on a grifter played by Bradley Cooper.

The Searchlight Pictures film is based on the William Lindsay Gresham novel of the same name and follows a charming but down-on-his-luck man played by Cooper. After ingratiating himself with a clairvoyant (played by Toni Collette) and her mentalist husband (played by David Strathairn), he learns new grifting skills that grant him a ticket to mingle with the ultra-wealthy of 1940s New York. This puts him in conflict with a mysterious psychiatrist played by Cate Blanchett and a dangerous tycoon played by Richard Jenkins, all while a virtuous young woman named Molly (Rooney Mara) is at his side.

The new “Nightmare Alley” trailer shows off the impeccable craft of the film, which is no surprise given del Toro’s involvement — he reunites here with frequent cinematographer Dan Laustsen, while newcomers to his crew include production designer Tamara Deverell and composer Nathan Johnson. 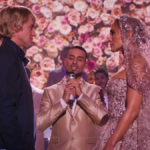 This is the filmmaker’s first feature since winning the Oscars for Best Director and Best Picture for his 2017 romance film “The Shape of Water,” and he opted to tackle the noir genre with gusto.

While the source material was previously turned into a 1947 film, del Toro has maintained that this new film is based on the novel itself and is not a remake of the prior feature.

“Nightmare Alley” will be released exclusively in theaters on Dec. 17.