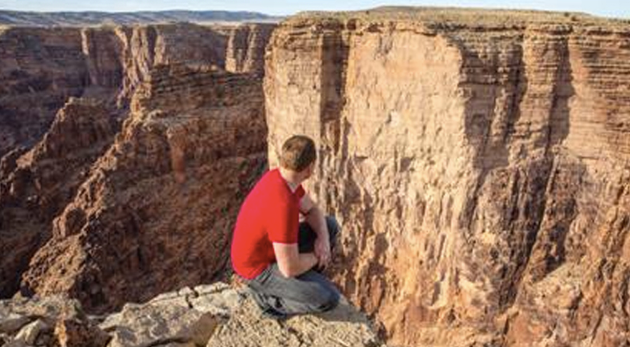 Nik Wallenda completed an astonishing, agonizing-to-watch tightrope walk across the Colorado River Gorge near the Grand Canyon on Sunday.

The special "Skywire Live With Nik Wallenda," which Discovery aired worldwide, billed the no-net, no-harness crossing as "the greatest stunt of all time."

The line stretched the length of four football fields — 1,400 feet — over a height of 1,500 feet — higher than the Empire State Building. It was about as thick as a tennis ball. Though the event was promoted as Wallenda crossing the Grand Canyon, some noted that the chasm he crossed wasn't actually part of Grand Canyon National Park. That made the feat no less dazzling.

Also read: Nik Wallenda on His Grand Canton Walk: We All Stare Death in the Face Daily

The twenty-two minutes and fifty-four seconds it took Wallenda to complete the crossing may have been the most prayer-filled in television history. Wallenda, a devout Christian, prayed before the stunt and kept praying throughout it. (Can you blame him?)

He said as he first took to the tightrope and looked down into the canyon: "Praise God, this is awesome. Thank you Jesus for this wonderful view."

Viewers could hear the sound of the winds around him. The tightrope seemed to be more wobbly than he would have liked: At two minutes and 24 seconds into the walk, he knelt briefly, then rose again, and continued walking, praising Jesus and praying.

"Lord, help this cable to calm down," he said.

The wind whipped his shirt and jeans.

"The winds are way worse than I expected," he said at the six-minute mark.

Two minutes later he added: "This is not fun."

At the 13-minute mark, he knelt again and asked Jesus to calm the winds.

"Woo, my arms are tired," he said, holding a 43-pound balancing pole at about three quarters of the way through. "Woo, that's a long way down."

Then he began thanking friends, loved ones, and the Discovery Channel "for believing in me." With his journey nearly complete, he blew a kiss to his family.

Then he ran the last few feet, jumped from the line, and kissed the ground. He hugged his wife and three children, his mother, and everyone else in sight.

"I did it," he said, wiping his eyes — something he couldn't do as he carried the pole.

"It took every bit of me to stay focused that entire time," he said. "My arms are aching like you wouldn't believe."

Co-host Willie Geist of "MSNBC and "Today" told Wallenda he could tell he felt confident when he "stopped thanking Jesus and started thanking people at the Discovery Channel."

When Wallenda crossed Niagara Falls last year for an ABC special, the network insisted he wear a harness. But Discovery did not.

"It was Nik's decision and we honored it," a network spokeswoman told TheWrap Sunday night.

Discovery said the stunt elicited 700,000 tweets — 40,000 a minute. It said 1.5 million people streamed the stunt on Discovery.com. Millions more watched it on television, but ratings weren't expected until Monday.

Wallenda told TheWrap last week that he never thought the stunt was placing his life in danger, given his lifetime of training.

"I've got three children and a wife," Wallenda said. "And if I thought there was even a small chance of me losing my life… I wouldn't be doing it."

Wallenda comes from a family of daredevils, The Flying Wallendas, including a great-grandfather who died at 73 while attempting a tightrope walk.

"I don't consider myself a daredevil," he said on the special. "I was raised doing what I do. Seven generations, and 200 years. At this point it's in my blood. It's three words that I live by: Never give up."