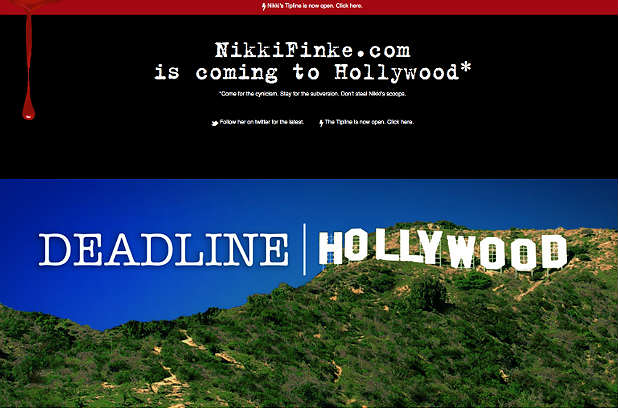 What happens when a news blog loses its signature writer?

That has happened to Deadline with the departure of Nikki Finke, and an independent analysis of the digital footprint of her brand versus Deadline’s suggests that the site she founded and has now left is going to face an uphill struggle.

Kontera, based in San Francisco, measures brand impact by looking at the number of a brand’s impressions across the Internet and social media. They claim to look at 1 billion tweets, and to be tagged on 15,000 participating sites, correlated to another 600,000 sites they monitor. (Translation: it’s a bunch of engineers mining data across the Web.)

Somebody had the idea of looking at Nikki Finke vs. Deadline and seeing which interests readers more. They found that between October 9 and November 7, Nikki had 44% of consumption, and Deadline had 56%. That’s an extremely high ratio of people interested in her, as opposed to the publication.

By comparison, here’s a look during the same period at Grantland vs founder Bill Simmons:

Nikki Finke is not alone in this category. Kara Swisher and Walt Mossberg are exiting AllThingsD at the end of the year, and Kontera

has also looked at how meaningful they are to that brand.

Also read: Kara Swisher, Walt Mossberg Made Millions for AllThingsD — And All They Got Were Those Lousy Red Chairs

In the Oct-November time period, AllThingsD had 68% media consumption while Walt Mossberg had 32% share of voice across the Internet.

A study that Kontera did this summer found when it comes to consumer electronics, Mossberg can dwarf even a gargantuan publication like the Wall Street Journal.

That in a nutshell describes the dilemma of digital news sites that base their brand, and hence their readership, on flagship writers who they may not be able to or want to retain.

In the case of Deadline, the findings mean that even though she wrote very little in October and November (though she did give a ton of interviews) “she is intrinsically tied to the identity of the site, further corroborating that the site will need to forge a new brand identity and do so without their most popular reporter,” said a spokesman for Kontera.

Put in other terms, with Finke leaving — “there will be an immediate hit,” said Ammiel Kammon, Kontera’s head of product and marketing. “We are absolutely in an age where the personality has more of a direct relationship with the audience that is outside the strict control of the publication they’re affiliated with, than before.”

As for AllThingsD, Dow Jones cutting ties with Mossberg and Swisher, will put that site behind the eight-ball.

“What it basically says is in consumer electronics he [Walt] will not be easy to replace,” Kammon said. “They’re going to need to bring on talent who can bring the hits, that’s what was driving AllThingsD.”

The same is less true for David Pogue, who recently left The New York Times for Yahoo.

So what of Deadline under its new leader Mike Fleming? Meanwhile, Finke dwarfs Fleming in interest across the web (see chart).

Kontera also found that the interest in Mike Fleming was quite a lot smaller in that same period than the site itself:

And worse yet, “probably about 50% of the consumption around Mike Fleming was speculation around the relationship between the two of them.”

Which doesn’t even account for what happens when Finke, in a presumed new gig, starts taking aim at the site she created and once ran.