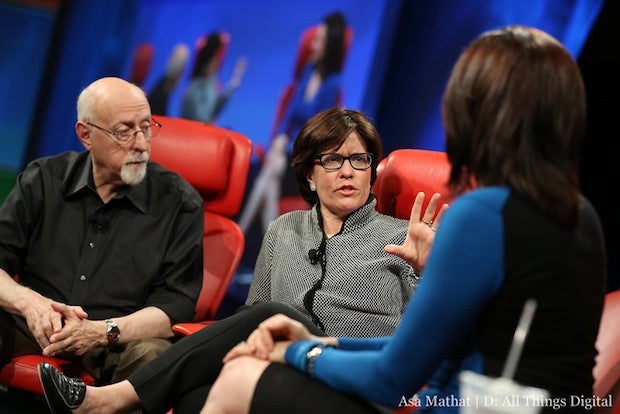 Let’s not sugar-coat what happened to Kara Swisher and Walt Mossberg of AllThingsD yesterday – they got kicked to the curb by Dow Jones.

After 11 years of building a must-read news site and the most news-worthy tech conference in the country, they were basically told: Thanks a bunch, and don’t let the door hit you on your way out.

Kara and Walt are keeping a brave face – they blogged with bravado on Thursday night that “you, dear reader, can’t get rid of us quite that easily” —  but the reality is they have been stripped of the brand that underpins and supports their work. They will now need to find funding to build a new site and, if all goes well, hang on to all the editorial talent they’ve gathered in one place.

They can do it, of course, but it is undoubtedly an incredibly painful outcome after all the sweat and effort put into D.

What is Dow Jones thinking? For years the joint venture had made lots of money for both sides. AllThingsD is one of the most successful conferences anywhere from a business perspective, bringing in something over $4 million a year for the main event in the spring, according to my sources.

It’s possible that Kara and Walt were demanding more to renew their deal with Dow Jones than Murdoch’s empire was willing to pay them. It’s possible that Swisher was a handful; those recent scoops about Sergey Brin’s affair at Google put her in an uncomfortable position, given that her wife is a senior Google executive.

Also read: Facebook’s Zuckerberg Has Meltdown Over Privacy at AllThingsD

But it doesn’t really sound like that is what is behind the decision. Dow Jones said they plan to hire 20 journalists in-house to expand their technology coverage. Sounds like they just want to build internally, and don’t want to rely on outside contractors.

As for AllThingsD, TheWrap asked Dow Jones what they planned to do with it?  “We have not yet finalized plans with respect to the brand,” said Dow Jones. Sounds to me like they plan to kill it.

The AllThingsD brand, which they own, cannot be worth much without the sage judgements of Mossberg and razor-wit (not to say cutting intelligence) of Swisher.

(Full disclosure: I consider Kara a friend and she has moderated at TheWrap’s conference, TheGrill.)

Their experience is an object lesson of sorts for those of us who are entrepreneurial journalists, seeking to create the news brands and journalistic models for the digital age.

The lesson seems to be: own your brand. Have equity in your site. Because when you can’t take it with you, what you’re left with is your rolodex and your reputation. Mind you, in this era, that is all you really need. I started TheWrap with basically those tools.

But that doesn’t mean it’s easy. Kara and Walt know that they have to begin again.

They plan to. The pair wrote on Thursday night:

“Starting Jan. 1, 2014, we will still be Web-siting and conference-producing and much more, albeit under a new corporate structure with new partners and investors. While we can’t give any details yet — and there are details — you can assume that this new independent business will be laser-focused on continuing and extending Web journalism and conference journalism with the highest standards. Plus, we will be able to finally have added resources, so we can grow in new and exciting ways, including hiring more journalists and doing much more video.”

I know they will, and no doubt successfully.