A lack of plus-size clothing options led E! host Nina Parker to create her own fashion line for Macy’s.

“When I was younger, I would complain and be like, ‘Oh, this sucks.’ As I got older, I started to feel like, ‘OK, what I’m feeling is valid, but what can I do about it?’ I really tried to do something with my discomfort, and my discomfort came from just really the lack of options available,” the host of E!’s “Nightly Pop” and “Live From the Red Carpet” told The Wrap’s Lawrence Yee.

“I felt like I had these fashion instincts that I couldn’t play out because the options just weren’t available to me,” she continued. “I was like, ‘Why can’t I have these types of jeans or bodysuits or shirts? Why is this not available to me?’ And that’s really what started me getting interested in doing clothing because I kind of felt like, ‘Well, OK, if nobody’s gonna do it, I’m not gonna just sit here. I’ll do it.'” 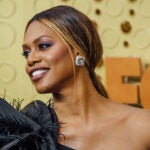 “When [E!] first said we want you on the red carpet for these awards, I was like, ‘Are you sure?'” Parker recalled. “What I’m bringing is a realistic view to fashion that people don’t really always relate to. My mom lives in Sacramento and her name is Phyllis. I always say, ‘Will Phyllis in Sacramento understand what the hell we are talking about?’ And if she wouldn’t, then I knew I needed to break it down in laymen terms.”

Wearability is key to the Nina Parker Collection, which features comfortable, versatile designs. But there’s a message behind the clothing line, too, including Parker’s favorite piece: a graffiti-style print that includes handpicked words with special meanings (see above).

“I actually placed each word on here strategically,” Parker explained. “There’s the word ‘queen.’ ‘Fearless’ across the chest. ‘Boss.’ ‘Hope.’ ‘Faith.’ Those are all the things that keep me going when I’m frustrated or feeling low, or just how I want people to see me when I go outside. When we talk about women having this invisible crown, that’s what these words of empowerment do when you walk out of the house.” 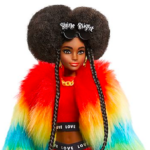 Parker isn’t only a pioneer in fashion, but also in the late-night space. With Lilly Singh’s show “A Little Late” ending, the “Nightly Pop” host is one of just a small handful of women of color in late-night (Amber Ruffin hosts a show on NBC’s Peacock streaming service).

“It really was fun. Effortless,” Parker recalled. “They are on camera who they are off camera. I’m the same way. So it just was three authentic people.”

She continued, “It’s a shame that there’s not more diversity in late-night. And I think that so many people are talking about it because there’s just such a lack of representation. That’s why I’m so happy to be included in that space. I still feel like a lot of people don’t know that there is a Black woman in late-night. I really want to amplify that. I want people to know that they’re being represented.”

Part of that representation means tackling more difficult subjects, including policy brutality and the ongoing Black Lives Matter movement. Last summer, Parker hosted a special on race in America on sister network Bravo and shared her personal experiences with racism on “Nightly Pop.”

“Growing up Black, you learn how to deal with compartmentalizing your emotions. And unfortunately, you work through pain. You know, I’ve been dealing with racism and microaggressions my entire life, even when I was a child and didn’t understand what was happening,” Parker explained. 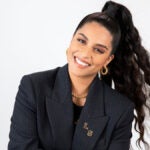 “For me, it’s about finding joy in the midst of the pain that you could possibly be in because this world does not stop,” she continued. “That’s why I’m able to talk about entertainment and talk about Ben and JLo, but also be able to come back and do this Bravo special on race in America, because Black people aren’t a monolith. There’s so many caveats to our world that don’t necessarily exist in other worlds.”

Parker has been able to find that joy in creating her fashion line, and offers these parting words of advice to others who also want to be a “disruptor,” especially women of color: “Reach out. I don’t think it ever hurts to shoot your shot. Also just being tenacious, but also doing your own research … it’s always great to have a plan [and] know what you want to do.”

Check out Parker’s wide-ranging interview above for more on her clothing line and how E! navigated awards season during the pandemic.

The Nina Parker Collection for Macy’s is available beginning May 14.