Crafted in the Sundance Screenwriters Lab and embraced at 2020’s Sundance Film Festival, “Nine Days” does, indeed, feel very much like a festival movie — for better and worse.

It’s easy to see why high-altitude audiences would connect with the spiritual sentimentality of Edson Oda’s emotional debut.  But Sundance, in particular, is infamous for pumping up buzzy films that deflate quickly upon arrival.

Where Oda succeeds most strongly is in his deep respect for actors, several of whom make the most of the more experimental nature of indie cinema. Chief among these is Winston Duke, who expands a potentially forgettable role into a powerfully theatrical portrayal. Situated in a desolate way station between nothingness and life on Earth, Will (Duke) oversees an untold number of humans. Whenever his charges die, he’s required to replace them. Since a “vacancy” has just opened up after a mysterious car crash, a handful of random souls appear out of the ether, each ready to apply for the position. 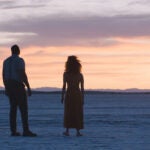 All of them have, yes, nine days to prove themselves worthy of life. There’s Kane (Bill Skarsgård), who is both unusually perceptive and possibly ruthless. Mike (David Rysdahl, “The Family”) is gentle and artistic, but lacking in confidence. Wide-eyed Maria (Arianna Ortiz, “Parenthood”) may not be as childlike as she appears. Alexander (Tony Hale) is an edgy everyman, who’d really prefer to skip the audition and just have a couple of beers with Will.

But that’s not the way it works. Instead, the candidates are required to sit in Will’s living room all week, watching a giant wall of televisions depict the lives of those who have already been chosen. Then they submit to his demanding interview process, in which he wants to know what they liked the best, the least, and — among other challenges — what they’d do if a sadist threatened to kill either their own child, or every other person in proximity. Throughout this depressing process, Will decides which souls deserve to exist in real life, and which do not.

Since all the candidates show up fully formed as individuals with personalities, wants, and needs, Will is barely better than the sadist; he’s essentially going to kill four of the five souls. And they all know it. 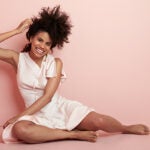 Because Oda’s script starts with this dubious concept, he’s got to twist it into knots to defend and deconstruct it. His primary method is to introduce a manic pixie dream girl in Emma (Zazie Beetz), who is apparently the very first iconoclast to reject Will’s game. Unlike the other candidates, she arrives late and unbidden, casually eating a ripe peach. (If you’re wondering where she got it, you’ve already zoomed passed the movie’s limited terms.)

Emma refuses to answer Will’s questions, and she challenges his power with laid-back confidence. Will, who was too sensitive for Earth, has become hardened by the demands of humanity and his job. She wants him to shake off the shackles of bureaucracy and the armor of self-protectiveness, and take joy in the beauty of peaches and walks on beaches.

In both its sentimental view of existence and its bold lack of internal logic, “Nine Days” feels very much like a faith-based movie that prioritizes messaging over subtlety, logic, or even consistency. If Will spends his years filling vacancies on Earth, why is he so obsessed with Amanda, the woman who died in the car accident and began this particular cycle? Why does he record everyone’s lives on, of all things, VHS tapes? Why do the candidates seem to know how to do everything, but are awed every so often by experiences like running water? Has it never occurred to Will, or his creator, that watching humans 24-7 without their consent or knowledge is not wistful or charming or intriguing but creepy and immoral? 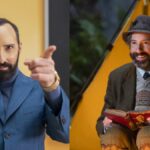 When a movie doesn’t hold up to introspection as a whole, it’s best to examine its parts. And some of those are admirable. Duke is outstanding, making the absolute most of a rare actor’s showcase. Benedict Wong is also memorable as Kyo, his more easygoing colleague. Skarsgård and Hale are the standouts among the candidates, with the former tapping into just a touch of his Pennywise menace, and the latter playing off our knowledge of his unexpectedly restrained comic gifts. Beetz, understandably, struggles more with the broadly-written requirement of embodying someone else’s conscience and salvation.

Wyatt Garfield (“Diane”) shoots this oddly bleak netherworld with aptly dampened, almost sepia visuals. And Antonio Pinto (“City of God”) matches the tone with a strings-heavy score that underlines every emotional beat. The best scenes, cleverly conceived by Oda and production designer Dan Hermansen (“Child’s Play”), find Will softening the blow of a candidate’s impending disappearance by recreating his or her favorite moment from those VHS tapes.

Even these, though, don’t stand up to any scrutiny. Does he do this for all losing candidates every single time there’s a vacancy? Where does he get the materials? Where does he store them? How does he even have time, when he’s tasked with the considerable responsibility of monitoring deaths and choosing lives?

How you answer will, like the rest of the film’s tests, determine just how long you’ll last in Will’s world.