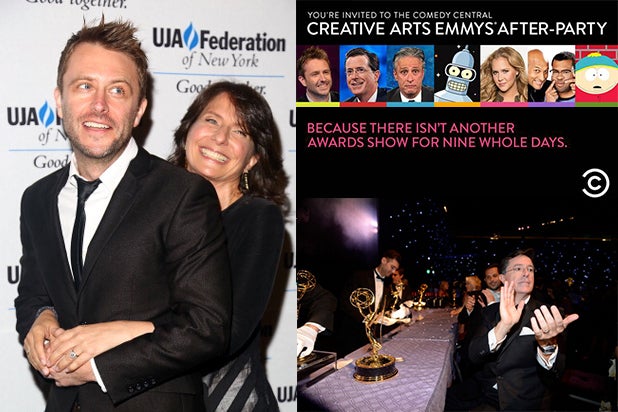 Man-of-the-moment Hardwick’s face has top billing on the invite ahead of Jon Stewart and Stephen Colbert. “We asked Chris to design the invite and this is what he came back with,” Kent Alterman , President, Content Development & Original Programming at Comedy Central, told TheWrap.

A few freeways and hours removed from the marathon trophy handout downtown at the Nokia, it is the first event to create celebratory shoulder programming around what Kathy Griffin famously dubbed “the Schmemmy Emmys.”

Griffin coined that term when her show “My Life on the D-List” vanquished Cesar Milan and three opponents who did not show up in 2007. Since then, the talent and turnout have grown considerably, and now the Creative Arts Emmys air on TV the night before the Primetime Emmys.

The celebration around the Creative Arts Emmys, where about 80 Emmys are handed out over several hours in categories ranging from “Outstanding Guest Actor in a Drama Series” to “Outstanding Original Main Title Theme Music”, has traditionally been the joy that the long ceremony is over.

With that adrenaline rush fading, winners and losers alike have shuffled over to the Creative Arts Emmys Ball, a full scale duplicate of the Primetime Emmys Governors Ball a week later. These folks drink and dance, eat and smoke, and stay late.

It is a great place to quaff champagne with popular Bravo executives or fork a filet with Louis C.K.’s creative team in between peppering them with questions about their secrets of busting the “good-fast-cheap” production tradeoff. In terms of late night star power, US Weekly’s starting line gets the night off.

The invite says they are partying early because “There’s not another awards show for nine days.” There are other smart reasons why Doug Herzog, Michele Ganeless, and Kent Alterman are making this move.

First, it is where and when they’re nominated.

Nineteen of Comedy Central’s personal-best 21 nominations are handed out at the Creative Arts Emmys.

Second, they actually produce TV on Monday and Tuesday nights, when their staffs would be at the Emmys in a “spirited” mood, or recovering from it.

Comedy Central is the only outlet juggling three day-and-date shows on a regular Monday night: “The Daily Show”, “The Colbert Report,” and “@midnight”. Two of them produce 3,000 miles away in New York. Even when the Emmys were on Sunday night, the trophy salad at their annual party ran up against the looming day jobs of those armies of writers getting loose.

Finally, they have a lot to celebrate this year and can not sit it out like they did in 2013.

On Fox’s “So You Think You Can Dance,” Nigel Lythgoe’s been moaning on-air about the fairness of Comedy Central’s collaborative Emmy wins in comparison to his choreographers’ solo work.

Grantland’s Bill Simmons recently ranked Comedy Central as the third best network behind only HBO and FX and ahead of AMC and Showtime. However, even his effusive and sincere praise (“Best half hour of comedy this century,” in reference to “Nathan For You’s” “Dumb Starbucks” episode) can not earn him an invite.

“Bill needs to do more for us before we invite him,” Alterman told TheWrap, despite the reciprocity of Alterman going to a recent Grantland party.

Comedy Central alum turned HBO darling John Oliver has a better shot at an invite. “Yes, all he has to do is sign a form at the door that ensures his return to Comedy Central,” Alterman said.

It’s at Boulevard3, a big room space that peaked in popularity around the time that Kim Kardashian was making uncompensated appearances there for TV Guide parties in 2006. Comedy Central previously partied in Boulevard3 for the “Roast of Roseanne Barr” after-party in 2012. So what’s the love affair?

“Perhaps someone is getting kickbacks,” Alterman deadpans.