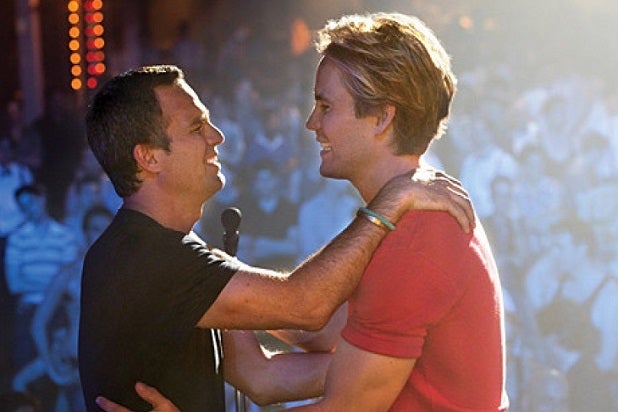 It would be hard not to tell a passionate, infuriating story about the early days of AIDS.

People died of what was initially called a “gay cancer” as the government ignored the disease out of what could most charitably be called neglect. Some religious leaders said gay people deserved to die. The disease has killed 30 million people, a number that would have been significantly smaller if more people had done more.

Also read: Mark Ruffalo Struggles to Be Heard About AIDS Crisis in New Clips From ‘The Normal Heart’ (Video)

About the only thing a filmmaker could do wrong is do too much: allow actors to overact, pack the story with scolding exposition, tell us what we already know. With “The Normal Heart,” his adaptation of Larry Kramer’s play, director Ryan Murphy stays mostly out of the way and lets his powerful story tell itself. The film premieres Sunday on HBO.

There are some big, helpful creative decisions early on: The 1980s HBO logo and casual sex of the film’s early moments immediately take us back to an earlier time, and establish a period in which gay men lived two lives. Out in paradises like Fire Island, they often concealed themselves at work, for well-grounded fears of repercussions.

There’s no question the people in power, from President Reagan on down, should have done more. The film makes the obvious case, as the SILENCE=DEATH slogan did in the 1980s, that secrets kill. Governments can’t ignore plagues and hope they — or their victims — will just go away.

But “The Normal Heart” is even more powerful when it makes the very relevant argument that everyone needs to stand up and be counted. Some of its protagonists, including Taylor Kitsch as the semi-out leader of an anti-AIDS activist group, have to fight from inside a closet. Others, like Mark Ruffalo‘s Ned Weeks (a stand-in for Kramer), are spoiling for an open fight. As the film’s promotional posters tell us, “To win a war you have to start one.”

Ned tries to start war everywhere he goes. The film is hands-off in letting us decide whether his adversarial approach is the right one — until the facts intercede. Characters we care about begin to die. And as viewers, we find it impossible not to see parallels with modern fights for gay marriage in the U.S., and for even more basic human rights in countries like Russia and Uganda.

Also read: AIDS’ ‘Plague’ Years – and the Battle to Remember Them

The mix of gay and straight actors in the cast sends a message, too: Yes, some actors still live in fear of being perceived as gay. But others aggressively seek out the chance to play gay, for an assortment of reasons: the acting challenge, to combat homophobia or just because they like a given role. The last one may be the most hopeful. We’re getting closer to an era where straight people don’t find gay people all that different. The recognition that homosexuality is normal leads to the next step, total equality.

The first half of the film has moments when it feels like Murphy may be trying to do too much. Bruce falls for Felix (Matt Bomer), a closeted New York Times reporter. He finds an ally in Emma Brookner (Julia Roberts), a cranky, matter-of-fact polio survivor who doesn’t want anyone to suffer as she has, and is neither shocked nor especially interested in her patients’ sexuality. We meet Neds’ brother, Ben (Alfred Molina), who supports Ned but considers him inferior. Jim Parsons plays an almost saintly peacemaker. The scenes pass by quickly, sometimes too quickly. It can be hard to connect with all the characters.

But the deaths bring clarity. Things that once seemed debatable no longer do. Roberts’ brusqueness can feel a little overdone — until we see who she’s up against. We soon realize that all the characters would be well within their rights to spend the entire film screaming.

The film doesn’t show us anyone realizing the error of their ways. The credits feel abrupt, with signs of hope, but nothing resembling resolution. If we want justice, that’s up to us.

“The Normal Heart” premieres Sunday at 9 p.m. on HBO.