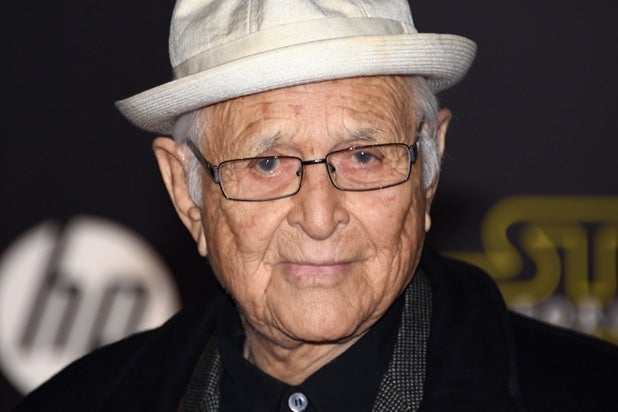 Norman Lear was already one of the most-honored people in television history, but now he has another distinction to add to his long career: At 97 years and 49 days, he’s the oldest person ever to win an Emmy Award.

Asked about the achievement, he said backstage at the Creative Arts Emmys on Saturday: “I don’t think about it a lot,” and quipped, “I like waking up in the morning.”

Lear set the record on Saturday as one of the producers of “Live in Front of a Studio Audience: Norman Lear’s ‘All in the Family’ and ‘The Jeffersons.'” The ABC program, which included live peformances of episodes from two of Lear’s seminal 1970s comedies, won in the Outstanding Variety Special (Live) category.

Jimmy Kimmel, who produced the show with Lear, was asked what it was like to make a show with the TV legend.

“It’s the greatest thing you could ever imagine. It’s like dancing with Fred Astaire,” Kimmel said.

Lear and Kimmel also announced that they are planning another live special later in the year, but declined to provide details.

Lear was also asked how he had written to many African American characters embraced by black viewers, especially on “The Jeffersons.” He had another quick joke: “Evidently you haven’t noticed that I’m black.”

He went on to add that he tries to focus on the universal similarities between all people.

With his nomination for “Live in Front of a Studio Audience,” Lear had already topped Carl Reiner to become the oldest Emmy nominee ever.

Lear’s win comes 48 years after he won the Emmy in the Outstanding Series – Comedy category for “All in the Family.” He would go on to win four Emmys for that show, and to be inducted into the Emmy Hall of Fame in 1984. He has also won two Peabody Awards, the Kennedy Center Honor, the Woody Guthrie Prize and the National Medal of Arts.

The award was announced at Saturday’s Primetime Creative Arts Emmy Awards ceremony, the first of two non-televised ceremonies that will precede the Sept. 22 Primetime Emmy Awards telecast. The ceremony took place at the Nokia Theatre in downtown Los Angeles.