Hollywood is in awe of the legendary career of Norman Lloyd, who died this week at age 106 after having worked with everyone from Orson Welles to Judd Apatow to Charlie Chaplin to Alfred Hitchcock.

Karl Malden once referred to Lloyd as “the history of our business,” and it shows in his enormous filmography, in which he worked as an actor, director and producer, not only continuing to work well past age 100 but being willing to share stories and histories with other film fans at screenings of classic films all across town.

“What a career. From Welles to Apatow. #RIP Norman Lloyd,” actor Ben Stiller said in reacting to Lloyd’s death.

“Look up mensch in the dictionary. There’s a picture of Norman Lloyd,” Brent Spiner added. 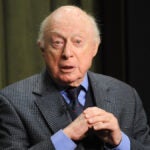 Lloyd was perhaps best known as Dr. Daniel Auschlander on the long-running ’80s series “St. Elsewhere,” but he was the last surviving member of Orson Welles’ Mercury Theater company and was seen famously dangling and falling from the Statue of Liberty in Hitchcock’s “Saboteur.” His career spanned decades and earned him two Emmy nominations as a producer. He also acted in other hits such as “Dead Poet’s Society,” “The Age of Innocence” and in a memorable spot in “In Her Shoes.” He also had recurring roles in such TV series as “Home Fires,” “Seven Days” and “The Practice.”

Media personality Keith Olbermann also shared the news of Lloyd’s passing, calling him a dear friend and reminiscing on Lloyd’s love of baseball and being old enough to remember seeing Babe Ruth tear his pants, adding that Lloyd was “intent” on reaching age 107.

See some other reactions to Norman Lloyd’s passing below:

Farrwell to a dear friend, Norman Lloyd, whose wit, vigor and boundless curiosity – even as he entered his second century – should be a model to us all. https://t.co/eBrrsp0nFu