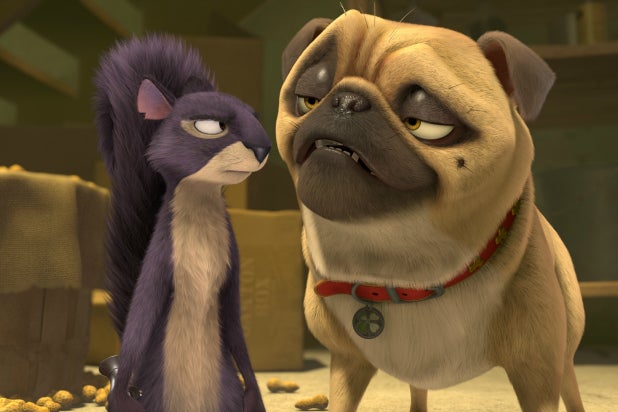 In the final season of his acclaimed comedy series “Extras,” Ricky Gervais shows us what his groundbreaking show “The Office” would have looked like had he listened to suggestions from the network; the show-within-the-show, “When the Whistle Blows,” was toothless and meandering.

“The Nut Job” has a similarly tampered-with quality. A movie so schizophrenic that it feels like several teams of artists worked on it without consulting with each other, it’s constantly shooting out in a million directions.

The cars and human clothing, for instance, suggest that the movie is a period piece set in the 1950s. Does that mean you won’t hear dubstep and played-out novelty hit “Gangnam Style” on the soundtrack? Nope. Did anyone notice that the squirrel heroes have no idea in Act One that fire and a propane tank are bad news, but in Act Three they understand the consequences of a lit stick of dynamite? Again, nuh-uh.

Set mostly in one city block, admittedly a huge amount of space if you’re a squirrel, “The Nut Job” begins with Raccoon (voiced by Liam Neeson) lamenting that there isn’t enough food stored away to get the park animals through the cold months. (One character actually says “Winter is coming,” but any resemblance to “Game of Thrones” is no doubt purely unintentional.)

Two squirrels — resourceful Andie (Katherine Heigl) and vain Grayson (Brendan Fraser) — are dispatched to hijack a hot-nuts vendor cart that has set up shop just outside the park, but they’re beaten to it by rogue Surly (Will Arnett) and his somewhat dim rat accomplice Buddy (whose character design is so similar to the protagonist of “Ratatouille” that Pixar should sue).

That initial heist goes terribly wrong, with the aforementioned propane destroying what little food was in reserves, so Surly is banished from the park. Out on the mean streets, however, he discovers an entire nut store. Surly’s dreams of a well-fed winter encounter complications in the form of a gang of bumbling bank robbers, who are using the joint as a way to break into the bank vault next door.

“The Nut Job” never seems sure who its target audience is supposed to be — the best animated films, from the Looney Tunes shorts to the feature films of Pixar and Studio Ghibli, tell stories that adults and children can both enjoy. They assume that grown-ups haven’t completely abandoned their youthful sense of wonder, and that younger audiences are smart and attentive enough that they don’t need to be condescended to.

In this messy script by Lorne Cameron and director Peter Lepeniotis, however, fart jokes and a high-strung talking pug (Maya Rudolph) coexist uneasily with an overly complicated plot (why do the bank robbers need the nuts again?) and a sub-“Animal Farm” political allegory that manages to be simultaneously anti-collectivist and anti-objectivist.

To use a phrase I often have to come back to when discussing unsuccessful comedies: All of this would be forgivable if it were funny. But “The Nut Job” is merely shrill and frantic, chock-full of uninspired characters and tedious wackiness.

Giving credit where it’s due, the animation is quite lovely, from the character design (except for Buddy) to the period details to the park’s mighty trees bursting with autumnal foliage. Even when it’s annoying to listen to, “The Nut Job” often gives you something nice to look at; still, don’t spend extra for 3D, since there’s only one moment in the film when the director apparently remembered to make use of it.

Parents and children with a deep desire to see an animated film about storing food for winter would be better off watching “A Bug’s Life” again, and if you’re jonesing for wisecracking rodents, Bugs Bunny remains king of that particular hill.

“The Nut Job,” unfortunately, tries to hard to appeal to both kids and adults and will wind up pleasing neither.