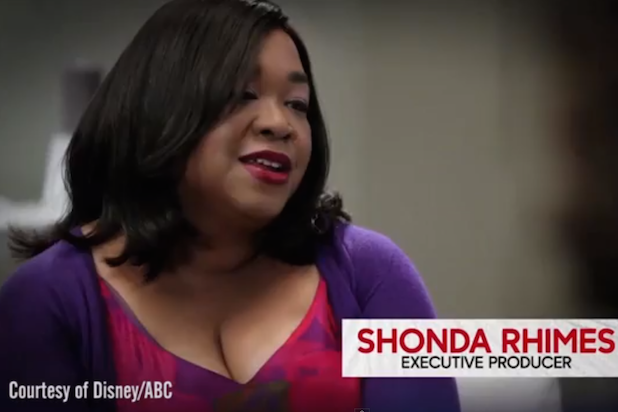 New York Times critic Alessandra Stanley is standing by calling Shonda Rhimes an “angry black woman” in her Friday review of the TV executive’s upcoming ABC drama “How to Get Away With Murder.”

“The whole point of the piece — once you read past the first 140 characters — is to praise Shonda Rhimes for pushing back so successfully on a tiresome but insidious stereotype,” said Stanley in a statement to TheWrap.

Rhimes had called Stanley out just hours after the review went online. “Wait. I’m ‘angry’ and a romance writer?!” Rhimes tweeted. “I’m going to need to put down the internet and go dance this one out. [Stuff is] getting real.”

The executive is perhaps best known for creating “Scandal,” which stars Kerry Washington as the fashionable, fiery political consultant Olivia Pope, and Stanley centered her piece around the evolution of black female characters on television as seen in Rhimes’ shows.

“When Shonda Rhimes writes her autobiography, it should be called ‘How to Get Away With Being an Angry Black Woman,'” Stanley wrote in her review. “Rhimes, who wrought Olivia Pope on ‘Scandal’ and Dr. Miranda Bailey on ‘Grey’s Anatomy,’ has done more to reset the image of African-American women on television than anyone since Oprah Winfrey.”

“Ms. Rhimes has embraced the trite but persistent caricature of the Angry Black Woman, recast it in her own image and made it enviable. She has almost single-handedly trampled a taboo even Michelle Obama couldn’t break,” Stanley added.

The review itself was titled “Wrought in Their Creator’s Image” and in it Stanley repeatedly credited Rhimes with “constructing” elements of the series. But as Rhimes pointed out in one of her tweets, she only serves as an executive producer on the show. “How to Get Away With Murder” was actually created by Peter Nowalk.

Here are some of Rhimes earlier tweets on the subject, each has already been favorited and retweeted hundreds of times.

Confused why @nytimes critic doesn’t know identity of CREATOR of show she’s reviewing. @petenowa did u know u were “an angry black woman”?

Apparently we can be “angry black women” together, because I didn’t know I was one either! @petenowa #LearnSomethingNewEveryday

Final thing: (then I am gonna do some yoga): how come I am not “an angry black woman” the many times Meredith (or Addison!) rants? @nytimes