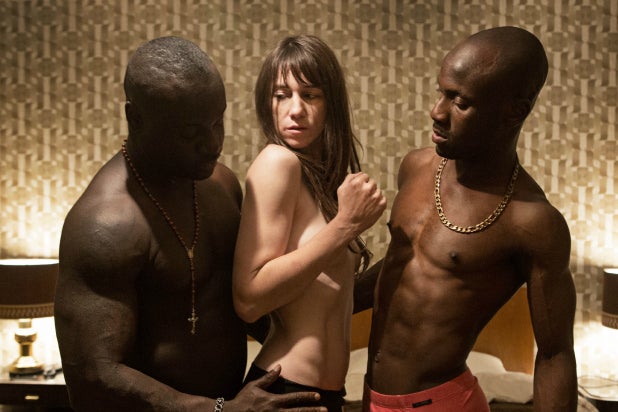 In telling the story of a woman who has spent her life giving in to any and every sexual impulse, von Trier examines the fear and desire of love; the insatiability of human appetites; the interconnectedness of history, art and science; and the quest for personal fulfillment even when society disapproves. In short, he’s after nothing less than the human condition here, and even if he doesn’t always hit the mark, he absolutely deserves points for ambition.

Watching “Vol. I” made me wish that the film was being presented in the United States as one four-hour movie (as it is in other parts of the world); after “Vol II,” however, it seems as though the film uses up the bulk of its best ideas early, with a definite loss of momentum as it makes its way toward a somewhat disappointing resolution. Even if the second half pales by comparison, it’s worth watching the whole thing to get a complete sense of von Trier’s ideas and of the magnetically underplayed performances by Charlotte Gainsbourg (appearing in her third consecutive film for the director) and Stellan Skarsgård.

Seligman (Skarsgård) finds an injured and bleeding Joe (Gainsbourg) in an alley; after she refuses to let him call the police or an ambulance, he takes her upstairs so that she can lie down and have some tea. As she recuperates, she begins to tell him her vast and complicated sexual history. (Since each chapter is inspired by something in Seligman’s apartment — a fly-fishing lure, a cake fork, music by Bach — I wondered for a moment if Joe might turn out to be Keyser Söze.)

The adventures of young Joe (Stacy Martin) include trolling a train-full of men with her friend B. (Sophie Kennedy Clark) as the two compete for the most conquests. Later, in the best sequence of “Nymphomaniac” (the term Joe prefers in describing herself), the angry wife (Uma Thurman) of one of Joe’s many partners confronts Joe for destroying her family. The recurring motif throughout Joe’s life is Jerôme (Shia LaBeouf): when we first meet him, he’s the callow lad who brusquely relieves Joe of her virginity, but later he becomes her boss and then her first actual love, which of course leads to any number of complications.

For his part, Seligman can only relate Joe’s experiences to more academic pursuits — you’ll probably never see another movie about sex with this many references to “The Compleat Angler” and the Fibonacci sequence — and his interjections prompt Joe to remember her father (Christian Slater) who taught her about trees and the soul.

By the time we get to “Vol. II,” it’s clear that Joe’s downward spiral and refusal to change — she storms out of a 12-step meeting for sex addicts and sacrifices everything for her sub-dom relationship with a blank-faced sadist (Jamie Bell) — brings her nothing but misery and loss. Her whole intent of talking to Seligman was to convince him that she is the worst of human beings, but von Trier doesn’t seem to agree with her assessment, offering up a few characters who are even worse than Joe.

“Nymphomaniac, Vol. I” engages the viewer and draws us into the story, but by the middle of “Vol. II,” we’re left with a quandary: no simple explanation of why Joe is who she is and does what she does would feel satisfactory, but at the same time, her experience is so unique and extreme that it’s hard to read the character as having something to say about humanity at large.

As with “Breaking the Waves” and “Dancer in the Dark,” von Trier sympathizes with his women and the misery that the world heaps upon them, but in doing so, he must heap his own misery in their direction so that we get the point. “Nymphomaniac” has a slier wit and lighter touch that makes it less of a grind than those earlier films, but it brings the hammer down all the same.

None of the actors performed the penetrative sex that’s apparent in the film — stand-ins and computer trickery seamlessly fool the eye — but this is the sort of movie that demands a great deal of literal and emotional nakedness from many of its cast members. Gainsbourg and Skarsgård are so riveting, that I could have spent the four hours in that apartment, listening to them talk, and Martin and LaBeouf both really put themselves out there, in not only their physicality but also the many emotional notes they’re called upon to play.

It’s Thurman who definitely makes the most striking impact, calling up rage, sarcasm, helplessness and longing in a bravura turn; there are indeed no small parts.

If you’ve found earlier von Trier films to be impenetrable and punishing, “Nymphomaniac” isn’t going to be the one that wins you over. But admirers of the director, and even those who run hot and cold with him, will find this sprawling, problematic and often fascinating film one they’ll want to see and discuss — just maybe not on a first date.