So here we are, stuck in the painfully long space of time between this summer’s “Avengers: Infinity War” and “Ant-Man and the Wasp” and next year’s “Captain Marvel” and the as-yet-untitled “Avengers 4.” There’s a whole eight months between now and “Captain Marvel” in March. That’s a lot of time to make wild guesses about what’s to come in the final two chapters of this stage of the Marvel Cinematic Universe.

I’ve spent a lot of time going down comic book rabbit holes the last couple months to try to get a handle on all this, and I’ve got one of those wild guesses for you right here. This one involves what part Carol Danvers, aka Captain Marvel (Brie Larson), will have to play in all this madness. And how “Ant-Man and the Wasp” may have given us a pretty big hint about that by having Scott Lang, the Ant-Man (Paul Rudd), get stuck in the Quantum Realm when Thanos snapped his fingers.

I think the clue comes courtesy of an obscure hero from the ’80s named Quasar. 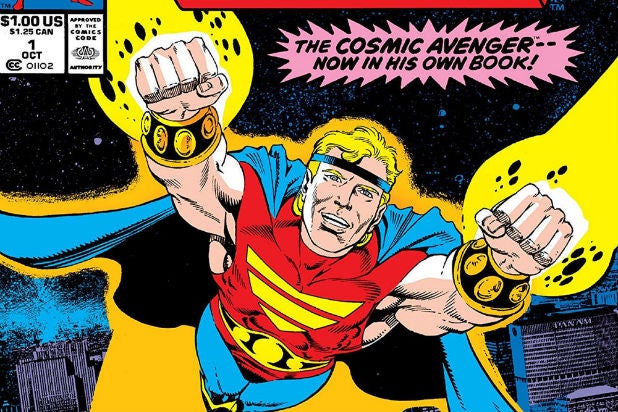 Ever heard of Quasar? No? Don’t worry, that’s not all that unusual. For a cosmically powerful hero from Earth, Quasar (real name Wendell Vaughn) is pretty obscure, and as I’ve polled various comic book nerds about him, only once have I gotten a stronger response than “Oh, yeah, that guy.”

Also Read: Could Ant-Man Show Up in 'Captain Marvel'? We Think So

His lone solo run lasted from 1989 to 1994 — 60 issues, and only nine of them are available in the Marvel Unlimited app. Nine! It’s not unusual for old runs to be missing issues on Marvel Unlimited, but that’s a pretty unusual and dramatic ratio. While, sure, he did pop up every once in a while for crossovers and guest appearances after his solo run, and Marvel recently handed off the Quasar mantle to a new character, nobody cares.

But while I categorically don’t think we’re gonna be seeing him in a movie any time soon — or ever — there are interesting Quasar-related things that I think have a pretty good chance of being very relevant to the Marvel Cinematic Universe after “Ant-Man and the Wasp” and ahead of next year’s “Captain Marvel.”

But before I get to those things, we should step back for a second and talk about the Quantum Realm. The Quantum Realm has been one of the MCU’s most interesting enigmas — specifically because of the name — since it was introduced back in the first “Ant-Man” movie. The comic book equivalent of the Quantum Realm concept is the Microverse, though it does not resemble the Microverse all that much from what we’ve seen of it so far in “Ant-Man” and “Ant-Man and the Wasp.”

Also Read: The Complete Timeline of Marvel Cinematic Universe Movies, From 'Iron Man' to 'Ant-Man and the Wasp'

So in Marvel comic books there’s a concept of a sort of side dimension that characters use to travel around the universe quickly. Basically every sci-fi universe has some version of this — hyperspace in “Star Wars,” for example — but Marvel has been pretty haphazard about it over the decades they’ve been using this conceit, which a bunch of different names being thrown around to describe this side dimension.

But the basic concept has been relatively consistent over the years. Characters will use some kind of dimensional portal or wormhole to travel to this other dimension, and from there they can jump back out to wherever they want to go. The first time Marvel used this idea was back in “Fantastic Four #37” in 1965, when Reed Richards and pals use an experimental rocket drive to fly through what Reed calls “subspace” to get to the Kree Empire in a different galaxy.

“Subspace,” “hyperspace” and “warp space” are the three main terms that are thrown out there to describe this method of travel, though those are not the only ones, and most of the time they kinda just gloss over what’s actually going on when folks skip around the universe. Like it’s just your run-of-the-mill sci-fi faster-than-light travel, don’t worry about the specifics.

And that’s more or less how the MCU has treated interstellar travel thus far. They just go fast, don’t worry about it. And so we don’t know or care about how that works.

Okay, so there are two reason I’m talking about this right now. First, here’s how Jack Kirby drew this “sub-space” for the first time back in “Fantastic Four #37”: 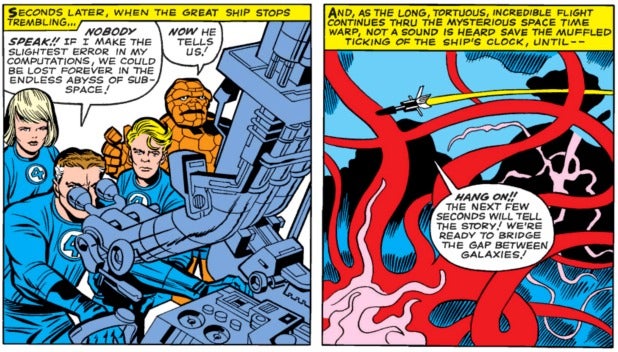 So, that is vaguely reminiscent of the some parts of the Quantum Realm that we see in “Ant-Man and the Wasp.” See for yourself: 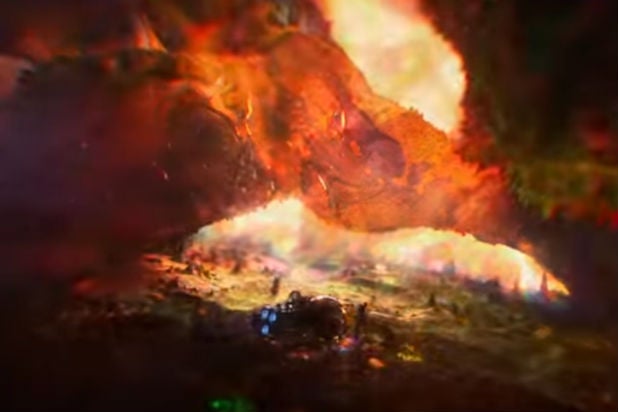 Now, let’s go to my second reason for bringing all this up: Quasar! Finally, let’s talk about Quasar.

So the really interesting thing about Quasar is that he is, essentially, a quantum superhero. His power comes from the Quantum Bands which can do, well, whatever the author of the comic in question wants them to. That’s the fun of “quantum” things.

But there is one specific thing that Quasar can do with the Quantum Bands that is relevant to all this — he can use them to do that sub-space travel thing without a ship. Except he doesn’t call that side dimension sub-space or any of the other terms that are used in Marvel lore. He calls it the Quantum Zone.

You could try to argue that Quasar’s Quantum Zone is not the same as sub-space — but it functions the same way. And when he makes what he calls a Quantum Jump in “Quasar #32,” some people watching even guess that he’d entered warp space. 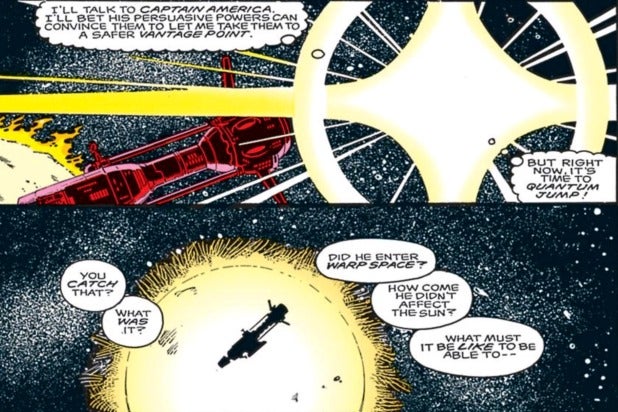 So we’re going to assume they’re the same thing.

Now, even more interesting is that Quasar’s Quantum Bands draw their power from the Quantum Zone, much like how Doctor Strange draws his power from other dimensions. And even more more interesting is that Quasar was given the Quantum Bands, and thus his power, by the cosmic entity Eon — who named him the new Protector of the Universe.

The previous Protector? Mar-Vell, who we’re going to see in “Captain Marvel” next year, as played by Jude Law.

Again, I don’t think there’s even a small chance that Quasar himself is going to show up in the MCU, but I would guess there’s a distinct possibility that Carol Danvers, Captain Marvel herself, will be given some of Quasar’s quantum abilities.

Also Read: 'Avengers: Infinity War': Here's Why Thanos Waited to Go After the Infinity Stones Himself

It would fit irritatingly well based on how the MCU likes to sort of remix comic book lore, and based on certain assumptions we have about what will happen in “Captain Marvel” and “Avengers 4.” Let’s run through those real quick:

1. Scott Lang, aka Ant-Man, is now stuck in the Quantum Realm after “Ant-Man and the Wasp,” and he probably won’t get out the way he came in. We’re assuming a “time vortex,” which Janet van Dyne (Michelle Pfeiffer) mentioned just before he went down there, will be involved. We don’t know what a time vortex is, but we’re guessing it’s a wormhole back to the normal world — which also probably sends whoever goes through one to a different time than the one they came from.

2. Mar-Vell, the original Captain Marvel and the Protector of the Universe, will die in the 1990s-set “Captain Marvel,” setting in motion the events that will lead to “Avengers: Infinity War.” This is especially important given Mar-Vell’s relationship to Thanos in the comics — Mar-Vell was made a Protector of the Universe specifically because he and Thanos were arch-enemies. Read more about that here.

3. Carol Danvers will obviously take up the mantle of Captain Marvel and somehow be key to defeating Thanos in “Avengers 4.”

4. Time travel will be involved in defeating Thanos and undoing the damage caused by the Infinity Gauntlet in “Infinity War.”

So if time travel is important, it stands to reason that our heroes will have to figure out a way to travel to whatever times they actually want to visit on purpose. And that timely mention of time vortexes in “Ant-Man and the Wasp” would also indicate that that the Quantum Realm will be involved in facilitating said time travel — otherwise they’d need to steal the Time Stone off Thanos’ burnt out Gauntlet, which doesn’t seem like a logical way for the “Avengers 4” story to kick off.

So if the Quantum Realm of the movies is the equivalent of the Quantum Zone from the “Quasar” comics, and if Captain Marvel in the MCU, possibly as Mar-Vell’s successor as Protector of the Universe, has some sort of Quantum Band-type tool that can harness the power of the Quantum Realm, then she may well be able to use it to send the Avengers off on a rollicking time adventure.

Based on the pieces we have to work with at the moment, this feels like as good a guess as any. The MCU has often mixed and matched pieces from the comics in new places and characters, and often just goes in completely new directions with stuff, like Janet van Dyne’s as-yet-undefined quantum abilities which have no apparent precedent in the comics.

Now, if we’re right about any of this then it’s likely we’ll only be half-right. Like maybe there is a character who can use the Quantum Realm to jump through time in a controlled manner, but it’s not Carol Danvers. We theorized elsewhere that Ant-Man could meet a past version of Janet down there — maybe the reason she knows what a time vortex even is is because she has used one before, or watched Scott go through one. Or maybe Ant-Man himself will figure it out after being stuck down there a while.

Or maybe we’re completely wrong. But based on what we know about the situation in the MCU at present — which admittedly is not really all that much — and based on what we know of how the creative overseers of the MCU operate, what I’m suggesting here certainly feels like the sort of thing they would do.

But whatever the answer is, we’ve got a long wait until we find out one way or another. “Captain Marvel” is a mere eight months away.