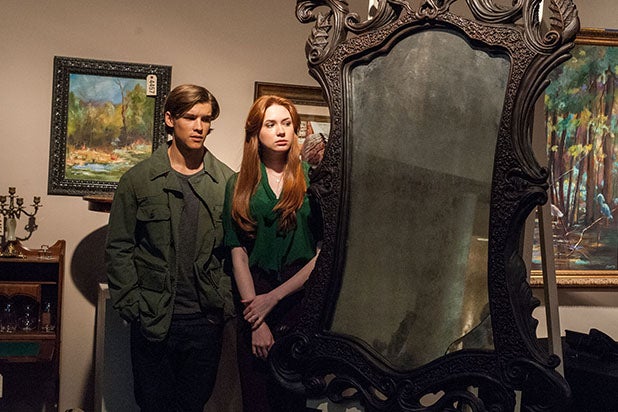 If last summer’s “The Conjuring” offered possession stories their classiest entry in decades, Mike Flanagan‘s “Oculus” lends elegance to haunted object movies, a subgenre distinguished by such dubious classics as “Death Bed: The Bed That Eats.”

Flanagan, expanding his own 2006 short film to feature length, finds both humanity and horror in the story of two siblings who reunite to exorcise a possessed mirror, but the film’s uneven metaphorical core and a decidedly incomplete mythology prevents “Oculus” from reflecting anything truly haunting.

Karen Gillan (TV’s “Doctor Who”) plays Kaylie Russell, a young woman who reunites with her brother Tim (Brenton Thwaites) upon his release from criminal institutionalization in order to make good on a promise they made to one another as children. Returning to their childhood home for the first time in 11 years, they set up a barrage of cameras and other accoutrements in order to capture proof that a malignant force in an antique mirror is responsible for the deaths of their parents Marie (Katee Sackhoff) and Alan (Rory Cochrane).

Despite their meticulous precautions, alarms and fail-safes, Kaylie and Tim quickly start experiencing strange visions that not only don’t reflect reality, but also undermine their efforts to obtain objective evidence of supernatural forces. But after they find themselves unwittingly reliving the dysfunction and violence that led to their parents’ murder, Kaylie and Tim begin questioning whether or not they can go through with their plan — or even survive the night.

Combining the adult Kaylie and Tim’s current endeavor with a flashback narrative that leads up to the murder for which Tim was institutionalized, Flanagan expertly creates a web of mystery that drives the audience towards a genuinely terrifying climax. Although the present-day story guarantees that the duo survives the flashback story, it manages never to undermine suspense, especially as their grown-up selves begin questioning whether ghosts and spirits were to blame, or they’ve merely concocted the mirror story to ignore the harrowing truths about a painful childhood trauma.

Thankfully, the movie more or less validates their supernatural phobias from the outset, both providing a detailed history of the mirror’s destructive path and creating an escalating series of horrors that rely liberally upon both classic scare tactics and subtler mind games. From the wincing pain of pulling off a fingernail to the looming presence of glowing-eyed specters, “Oculus” pulls out all of the stops to keep the audience on its toes.

Even with a litany of marital problems beleaguering the increasingly troubled parents, however, the film never quite pulls off the notion that all of Kaylie and Tim’s fears, revisited and re-experienced, are manifestations of the adolescent turmoil created by their subconscious a decade earlier. Maintaining the constant battle between the siblings to explain or refute supernatural occurrences happening around them, Flanagan and co-screenwriter Jeff Howard‘s efforts to provide a psychological foundation for their characters’ behavior too often comes across as a stilted debate between two first-year psych majors trying to out-diagnose one another with information gleaned from WebMD searches.

That said, both pairs of actors playing the siblings are pretty remarkable, especially Annalisse Basso and Garrett Ryan as the younger Kaylie and Tim. Witnessing the deterioration of not just their parents’ marriage but also their sanity, Basso and Ryan avoid being either overly petulant or precociously mature, regarding the vagaries of the adult world with an appropriate, and resonant, mixture of bewilderment and terror.

As their elder counterparts, Gillan plays Kaylie’s determination so rigidly and intensely that it feels like she should have been the one institutionalized, while Thwaites offers the right amount of incredulity (and later, irrefutable acceptance) that they’re confronting forces more powerful than they can control.

Although there are several bone-chilling scares, some supernatural and others frighteningly corporeal, the film doesn’t pay off strongly because it never explains the “motives” of the evil force within the mirror nor establishes what it means if that force succeeds (or fails) in manipulating its owners into committing murder. Do those things matter? Maybe or maybe not, depending on if you merely want to be shaken up or truly disturbed.

“Oculus” might be successfully unsettling and claustrophobic as it unfolds, but Flanagan’s film still leaves us with more questions than answers; this movie is no “Death Bed,” but the one Flanagan forces audiences to lay in nevertheless isn’t made quite as well as it needs to be.