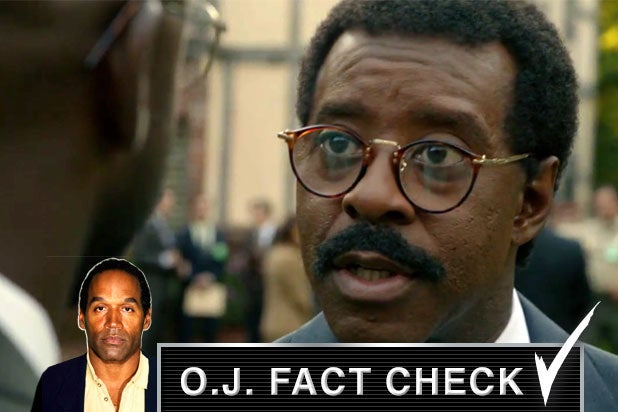 On the fifth episode of “The People v. O.J. Simpson,” moments after O.J. Simpson has snapped at prosecutor Chris Darden, Simpson attorney Johnnie Cochran pulls Darden aside to offer some advice:

“There’s something I’ve been meaning to tell you,” says Cochran, played by Courney B. Vance. “Whatever happens, don’t do Fuhrman. Make the white people do him.”

Did it really happen? Welcome to O.J. Fact Check.

The scene illustrates the strange mentor-adversary relationship between Cochran and Darden (played by Sterling K. Brown). It also foreshadows what Cochran knows about Detective Mark Fuhrman but Darden does not: that Fuhrman’s past use of the N-word is about to be devastating to the prosecution’s case against Simpson.

In “The People v. O.J. Simpson,” the exchange takes place at Simpson’s home, moments after O.J. yells at Darden for sitting on his bench.

In real life, according to Darden’s book, “In Contempt,” Cochran said something very similar to what he says on the show — though he said in it court, not in Simpson’s backyard. Here’s an excerpt, via Newsweek:

Still, Cochran may have tried to give me a break — on Fuhrman. Back in court one day, from behind, Cochran embraced me and put his mouth near my ear.

“We can’t ever do that kind of thing again,” he said about the way we’d argued the N-word. “This shouldn’t be your issue. Let these white people get up there and argue about Fuhrman. OK?”

I wasn’t going to be limited by my race and I told him so.

The show condenses two exchanges — Simpson blowing up at Darden, and Cochran offering Darden advice — into one tense incident in Simpson’s backyard. The setting for Cochran’s words are wrong, but the words are essentially accurate, according to Darden’s account.

Episode 5, called “The Race Card” and directed by John Singleton, may feel when you watch it like the least believable episode of “The People v. O.J. Simpson,” because there are so many stunning and dramatic moments. (We’ve done three different O.J. Fact Checks on it, as many as in the rest of the season so far combined.) But the representations are mostly quite accurate.

As we previously reported, the show did change the facts around one incident somewhat significantly, though not in an unfair way. The most surprising parts of the episode are all based in fact.