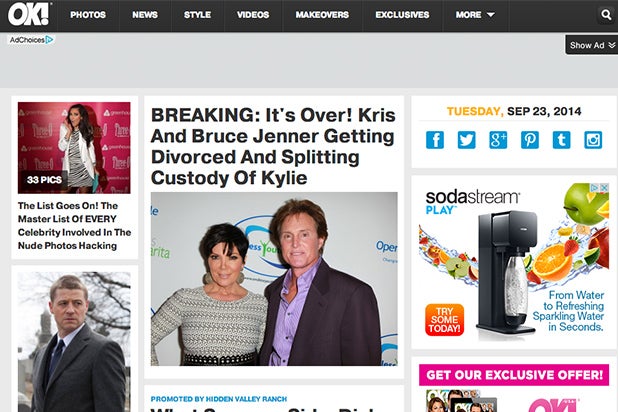 OK! Magazine’s website is dumping its celebrity-friendly coverage and going for more gossip, complete with a new staff, TheWrap has learned.

The website informed its digital team that their services will no longer be needed, three individuals with knowledge of the situation told TheWrap on Monday.

Spokesperson for AMI has not yet returned TheWrap’s request for comment.

The firings occurred in the New York office of the site, which is owned by American Media Inc. (AMI).

Also read: The Wire Shutting Down and Being Folded Into Atlantic Flagship Site

Dylan Howard, who currently serves a VP of news at AMI, editor-in-chief of the National Enquirer and editorial director at RadarOnline, will re-launch OK! Magazine’s website with a new team, insiders said. The future staff will be based in New York. The site previously laid off its team in Los Angeles and it was unclear if they will eventually be replaced.

Howard will begin by searching for an executive editor, who can steer the website towards more gossip-oriented coverage and less celebrity-friendly stories, TheWrap also learned.

This is not the first sign of turmoil at OK! Magazine. A  number of employees were let go in June 2012 when Star and OK! merged their editorial operations.

Richard Spencer, formerly of Bauer Publishing, is currently the editorial director at OK!

According to its website, OKMagazine.com averages 21.5 million page views each month.

For the record: A previous version of this story misidentified the location of the layoffs. TheWrap regrets the error.