In October 1932, seven years before her role in the highest-grossing film of all time, Olivia de Havilland was cast in the junior play at Los Gatos High School.

Her new stepfather, a man she and her sister called the Iron Duke, delivered an ultimatum: Give up the play or leave this house forever.

“I went off to school with my decision made,” de Havilland said in a 2001 speech for the Academy of Achievement. “I spent that night and several more with friends of my mother’s, went on with the play, and never again slept in the house.”

De Havilland, who turned 104 on Wednesday, is the last surviving female star of Hollywood’s Golden Age. She is still very much in the mix — in 2017, she sued FX and Ryan Murphy over her portrayal in the acclaimed series “Feud,” in which she was played by Catherine Zeta-Jones.

The lawsuit, which was later dismissed (after the Supreme Court declined to revive her case in 2019), continued a lifetime of standing up for herself. She played good-girl ingénues on the screen — including in that inflation-adjusted top-grossing film of all time, “Gone With the Wind.”

But off screen, she rebelled — just as she had as a high school junior — and her fight for better roles helped free countless stars from the studio system.

From “Images of America, Los Gatos,” by Peggy Conaway: 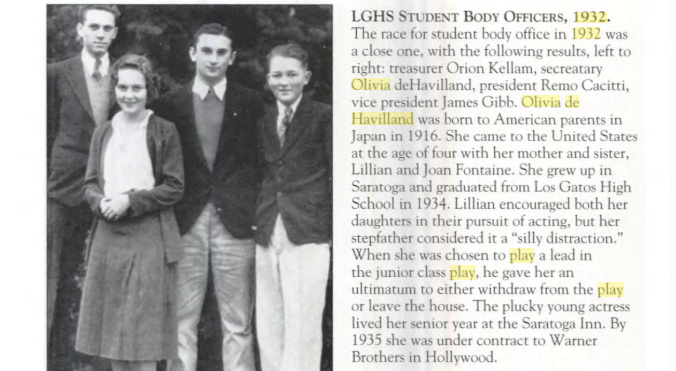 After graduation, she appeared as Hermia in Max Reinhardt’s Hollywood Bowl production of “A Midsummer Night’s Dream.” Those in the opening-night audience, de Havilland said, were Charlie Chaplin and Bette Davis.

Soon, de Havilland would befriend and vie for roles with Davis — but also beat the studio system in a way the more established actress could not.

Three months after the Hollywood Bowl production, de Havilland was under contract with Warner Bros., working on the film version of “A Midsummer Night’s Dream,” she recalled in the 2001 speech.

Her acting career would eventually include five Academy Award nominations and two Oscars, one for “To Each His Own” in 1946 and the other for “The Heiress” in 1949. (Her younger sister, Joan de Beauvoir de Havilland, would become the actress Joan Fontaine. Though their relationship could be chilly, they are the only siblings ever to win lead acting Oscars.)

De Havilland’s wholesome looks and soft brown eyes facilitated her casting as a proper, well-behaved foil for more tempestuous co-stars, most notably Vivien Leigh, the fiery Scarlett of “Gone With the Wind,” and Errol Flynn. In films like “Captain Blood” (1935) and “The Adventures of Robin Hood” (1938) Flynn often played the thief, pirate, or thieving pirate out to steal de Havilland’s heart. Their banter and chemistry fueled eight on-screen pairings.

In an Academy of Achievement interview, she said Flynn once asked her: “What do you want out of life?”

“I said I would like respect for difficult work well-done,” she responded.

But it was hard to find the work she wanted, typecast as she was as the good girl.

She begged Warner Bros to loan her out to MGM to play Melanie, Scarlett’s friend and rival, in “Gone With the Wind.” De Havilland told the Academy of Achievement that Jack Warner relented only after de Havilland appealed to his wife, Ann.

But her fight for roles was only beginning. She is quoted as saying in Judith M. Kass’ 1976 book, “Olivia de Havilland”:

I wanted to do complex roles, like Melanie for example, and Jack Warner saw me as an ingénue. I was really restless to portray more developed human beings. Jack never understood this, and … he would give me roles that really had no character or quality in them. I knew I wouldn’t even be effective.

The law at the time allowed studios to place actors on suspension when they rejected roles — as de Havilland once did when a script wasn’t complete at the start of shooting. Under the law at the time, the studio could add the time actors spent on suspension to the end of their contracts. Bette Davis unsuccessfully sued Warner Bros. in an effort to change the practice.

De Havilland went to court in 1943 to fight back when Warner Bros. tried to add time to her completed contract. Her victory led to what’s still known as the “De Havilland Law,” a section of the California Labor Code stipulating that an exclusive personal services contract — like an actor’s deal with a studio — cannot extend past seven calendar years.

Also Read: Film Critic Calls for Banishment of 'Gone With the Wind' Over 'Insidious' Racism

The law helped end the studios’ iron grip on talent, freeing them to break out of the safe, reliable roles studios often assigned them.

The years after the legal victory brought some of de Havilland’s biggest critical successes, including the two films for which she won Oscars, both of which she made for Paramount.

De Havilland has spent the last 50 years in Paris, where she still gives lively interviews about her life — and sends the occasional interesting note.

One went to “Suicide Squad” star Jared Leto in 2009, as his band, 30 Seconds to Mars, used the de Havilland law to get out of a contract dispute. It was written, the Los Angeles Times reported, “in formal, feminine script and arrived on thick, azure-colored paper.”

The men who once controlled her career are gone. She remains.

She received what she wanted out of life. And hasn’t stopped fighting.