Actress Sanaa Lathan (“Love and Basketball,” “The Best Man” franchise, “Succession”) makes her directorial debut with the teen drama “On the Come Up,” centering on teenager Brianna ‘Bri’ Jackson (Jamila C. Gray), who is striving to make her mark as a rapper, initially through rap battles. Because her father, Lawless Jackson, is a legend who not only won battles but also got to record prior to being killed, Bri has huge shoes to fill.

Making it as a rapper is not Bri’s primary challenge, however. When her mother Jay (Lathan), a recovering drug addict, loses her job, the family faces even greater financial pressure. To help make ends meet, Bri is already selling candy, but that stops when she is frighteningly manhandled by school security, bringing a racial-justice story into the fold. Her family’s need for money makes her even more determined to achieve success.

While rap-battling offers her that opportunity, the potential an even bigger payday offered one of her father’s former associates, Supreme (Method Man), forces Bri to make personal concessions that hide who she is. That causes a strain with her Aunt Pooh (an excellent Da’Vine Joy Randolph) — who is also her manager as well as an active gang member — and one of her best friends (and potential love interest), Malik (Michael Cooper Jr.). On top of that, Bri still has unresolved issues with her mother abandoning her and her brother Trey (Titus Makin) when her addiction took over. Cruelly, her battle-rap opponents use that and other vulnerabilities to throw her off her game. 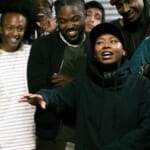 Also Read:
‘On the Come Up:’ Watch the Trailer for Sanaa Lathan’s Directorial Debut About an Ambitious Teen Rapper (Video)

“On the Come Up” represents a solid directorial effort for Lathan, who stuck her toe in these waters with a well-received short she shot during the pandemic. (Directing is also a family business; her father Stan Lathan has a distinguished career as a film and TV director, stretching back to the 1970s.) The younger Lathan’s direction comes across confidently while also exuding a distinct style that’s completely in step with the film’s main theme — dark and gritty, yet hopeful.

Performances from the main cast, including her own, are strong. Lathan’s Jay is the portrait of a mother and recovering addict we don’t often see. As the film progresses, it becomes increasingly clear that, even at her lowest, Jay prioritized the welfare of her children, even when it meant leaving them behind. And in her sober state, she emerges as one of her daughter’s greatest champions.

Some of that goodwill also applies to Jay’s sister, Bri’s Aunt Pooh. Although she is entrenched in gang life, she seems determined as both Bri’s manager and her aunt not to let her niece get caught up in that world. Like Jay, she wants better for Bri. Randolph’s rendering of her is impressive: She loves, protects and pushes Bri, and most importantly, she calls her out, letting her know that her words have life-and-death consequences and should not be delivered lightly.

Gray owns Bri, making it impossible to imagine anyone else in the role. Even when she doesn’t always sell us on her prowess as a potential star rapper, she never fails to embody a young girl on the brink of womanhood struggling with her emotions and looking for a way to use her voice and to have her say. Support from Lathan’s and Randolph’s performances seems to bolster Gray’s presence while also presenting different variations of Black womanhood, especially in urban environments. 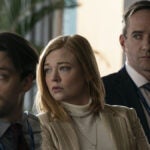 Also Read:
‘Succession’ Cast on the Secrets to Those Big Ensemble Scenes: ‘There’s Just a Lot of Trust’

The role Bri’s best friends Sonny (Miles Gutierrez-Riley) and Malik play in her life stands out, primarily because these young men support her in ways rarely ever captured on the big or small screen. As Bri faces off against her many adversaries in the male-dominated battle-rap underground and commercial music industry, Sonny and Malik’s presence serve as a reminder that not all young Black men are against her. Just like her father and her brother (the latter gets very little screen time), there are other Black men who love and lift her up.

Sadly, all is not praiseworthy in “On the Come Up.” Despite having acclaimed female rapper Rapsody as a consultant and coach, the rhymes during the battles don’t capture the tense moments in the way “8 Mile,” to which this film will be compared, did. Also, the deliveries by both Gray’s Bri and her other sparring partners, including real-life rapper Lil Yachty (who plays established rapper Infamous Millz), ring out as more spoken-word than rap. As important as words are in a battle, so is the flow and delivery. There is a cadence that separates rap from spoken-word, and that distinction is not captured here.

At too many points, the script from Kay Oyegun (adapting the novel by Angie Thomas) is uneven: Some story beats move too fast, while others pass too slowly, and there are narrative holes. Still, even with its flaws, “On the Come Up” — like 2018’s “The Hate U Give” — offers Black teen girls a voice in cinema that they have rarely had before. Lathan mines that gold, making her debut shine.

“On the Come Up” premieres on Paramount+ Sept. 23.