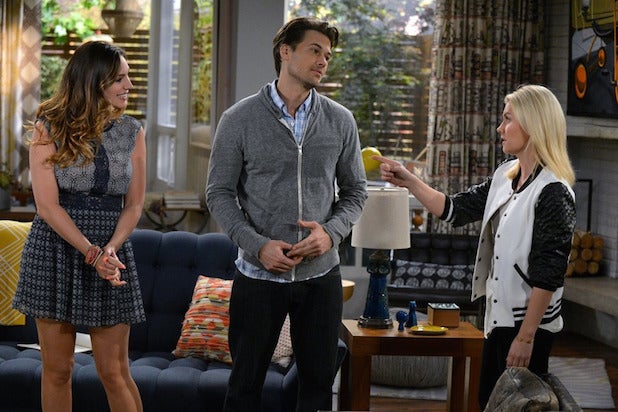 Elisha Cuthbert is not new to comedy.

Now, as the star of the new “Three’s Company” like comedy “One Big Happy,” which debuts Tuesday on NBC, Cuthbert proves she can pull off playing an awkwardly affable pregnant lesbian.

That’s not to say that “One Big Happy” is comedy gold. The pilot kicks off with a rather clunky stage setting moment in which Lizzy (Cuthbert) and her best friend and roommate Luke (Nick Zano, “Two Broke Girls”) explain the premise of the show to a nosy pharmacist who mistakenly thinks the pair is married.

As they explain, they’re best buds who made a pact that if neither one of them were romantically attached to other people by age 30, they’d have a baby together through artificial insemination.

While that’s a lot for a pharmacist to digest much less a viewer, Cuthbert and Zano gleefully proceed from there with an enhanced level of enthusiasm and chuckle worthy one-liners that makes them and the show easy to like.

Kelly Brook is equally charming as Prudence, the buxom and blunt British beauty Luke falls for at a bar one night. The romance is accelerated when Prudence reveals she’s an illegal alien in danger of deportation.

The two get married — of course — so Prudence can stay in America and that’s when Lizzy announces she’s preggers. And just like that, a sitcom is born.

Cuthbert, Zano and Brook make these predictable pratfalls work because they’re in on the joke and along for the ride. Creator Liz Feldman (“2 Broke Girls”) also adds an unexpected level of depth to the characters and their scenes.

For instance, Lizzy has to predictably win back Prudence for Luke at one point in the pilot and as it turns out, there is a kiss between the two women. But instead of festishizing the kiss and showing it, it’s wisely presented as a quirky little anecdote instead.

There’s even a moment when Cuthbert channels her best Ellen DeGeneres (one of the show’s producers). When Luke confesses that his pact with Lizzy hadn’t come up in his conversations with Prudence, Lizzy says, “You’ve known her less than a week. A Tuesday hasn’t even come up yet.”

Rounding out the cast and pulling some of the comedic weight are Rebecca Corry (“Rizzoli & Isles”), who plays Lizzy’s sister Leisha and Chris Williams (aka Krazee-Eyez Killa from “Curb Your Enthusiasm”). He costars as Leisha’s husband Roy. There’s also Brandon Mychal Smith (“So Random”), who plays Luke’s bowling alley employee and pal Marcus.

Lizzy even gets a love interest on Episode 4 (guest star Erinn Hayes, “New Girl”) and in one of the installment’s funniest scenes, Luke and the gang try to cleverly find out if the woman is a lesbian, too.

It’s scenes like this and a handful of others that establish “One Big Happy” as the thoughtfully lighthearted and frothy comedy that it is — and what could be wrong with that?