Where consumers go, advertisers will follow.  And with reality TV viewers flocking to some of the most active communities on the Internet, sponsors have found a rich new playground on their sites.

Whether advertisers are repurposing old TV spots or coming up with new, interactive features to lure "American Idol" and "Dancing With the Stars" fanatics, companies like Sprint and Acura have made reality sites a favored landing spot for commercial content, and a place to try out innovations in online sponsorship. 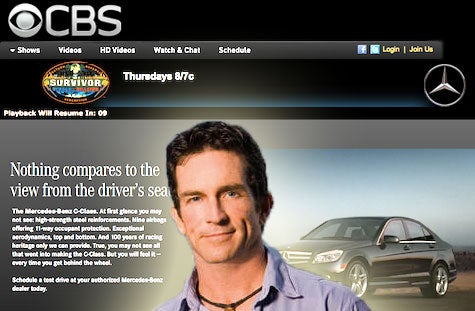 The media players that stream full episodes on most of the network sites, for instance, often find the episodes preceded by versions of normal broadcast ads, sometimes shortened to 5- or 10-second bumpers and some running a full 30 seconds.

On the official “Survivor” site – a site that is prominently sponsored by Sears – full episodes of the series are preceded by a brief Sprint logo, and interrupted periodically for a Chevron commercial.

At the “Dancing With the Stars” website, meanwhile, viewers are told the show is presented “with limited commercials by Cesar Canine Cuisine.”

But straightforward ad content like that is just the first step, says Bryan Hjelm, the VP of marketing for Unicast, an interactive advertising and marketing company for online publishers and ad agencies.
“Some advertisers are using short repurposings of broadcast TV spots as pre-roll bumpers,” he says. “But the leading advertisers are starting to realize that they can extend the connection with what we call ‘branded canvas’ ads, which essentially allow advertisers a blank canvas to introduce more and more interactivity into an ad spot that is focused on or around online video content.”
The idea for advertisers, wrote Mark Sherman at the One Degree marketing website, “is to look … for ways to break through a cluttered online environment and to figure out how to attract consumers to their message rather than the traditional model of simply pushing the message out to them.”

At Online Strategies Magazine, Caleb Hill called the branded canvas ads “a revelation for marketers, a huge financial success for the publishers, and consumers seem to accept them as well. These products enable the networks’ premium full-episode player environments with custom, immersive advertising experiences.”

Up for grabs in all of this: the rabid fans of reality TV who’ve created — sometimes with the help of the networks and sometimes without — communities of fans and foes, aficionados and bashers.
“Online is helping to fuel the popularity of those shows," says Hjelm, "and reality TV has always been at the forefront of enticing audiences online with original content.”
The germane statistics: Reality shows routinely occupy most of the Nielsen top five; the number of unique viewers of online video increased more than 10 percent in the past year, according to Nielsen’s February-to-February figures; and Americans are using TV and Internet simultaneously 35 percent more than they did a year ago.  The ensuing landscape presents, in Hjelm’s words, “infinite opportunities for advertisers.”

But here’s the key question: Are they using those infinite opportunities to repurpose the traditional television spots they’ve already made, or are they using the possibilities of online content to do something different?
Examples of the latter, which can be viewed on the Unicast website, include a Sprint ad that asks viewers to solve a Rubik’s cube containing all the applications on a Sprint Palm Pre (photo above), an Acura video that starts with a traditional TV spot but then opens into interactive content, and a Honda Insight ad (featured on CBS’ video player) that lets users change the car’s color, spin it around and call up other videos and photos.

“Advertisers have full control over how far they want to push levels of interactivity around their message or product,” says Hjelm. “We’ve seen great response to ads that introduce quizzes, games and options for viewing different pieces of content within the ad itself.”

For the companies doing the advertising, unconventional and interactive ads are an easy way to reinforce the message that their products are different. The Acura campaign, which encompasses ABC, CBS, NBC, Fox and Hulu, was designed “to articulate the Acura way of doing things, in contrast to the conventional way of doing things,” said Susie Rossick, the manager of Acura National Advertising.

The affiliated Honda brand took a similar stance with branded canvas ads that dated back to 2008, when the company launched a multifaceted campaign that began with a video shot on a notched road that played music as a Honda Civic was driven over it. "Honda is an advanced engineering company, and we thought it would be interesting to connect that to the Civic advertising campaign," said Gary Paticoff, senior vice president at Honda’s ad agency, RPA of Santa Monica.

Overseas, the possibilities have been taken even further: In the Philippines, for example, ABS-CBN television has used the 360-degree video platform Kyte as the online video platform for “Pinoy Big Brother,” its Filipino version of the long-running reality show “Big Brother.” In the process, the channel has created an interactive platform linking its site with interactive video experiences on Facebook – in order, says Kyte, to connect with fans via social media, and also to “monetize content through pre-roll, overlay and companion advertising on branded canvas pages.”

And while it might be possible to turn off viewers with too much advertising — particularly when it comes to shows like “Survivor” and “The Apprentice,” which at times prominently feature product placement — Hjelm insists that his studies show an expectation, and an acceptance, of commercial content.

“If you watch TV, you expect that you’ll have to sit through a certain amount of advertising," he says.  "And while people are used to getting online content for free, there is a tolerance for a certain amount of advertising.”
That amount, he adds, is certainly less than in broadcast television, “but you can get away with, maybe, four ads total in a 20- to 30-minute segment.”
Over the next few years, Hjelm says, the driving force in the evolution of online advertising will be the hardware, with mobile devices and new formats like the iPad giving increasing number of platforms for video content … and with it, advertising.

“I call it the three-screen approach,” he says. “You’ll get a show on your TV whenever you want it, not just when your cable provider has it on the schedule. You’ll have that same show on demand on your PC, and on demand on your mobile device or tablet. And you’ll see ad formats specific to each of those screens.”