Despite a 2018 pledge to program more films by female filmmakers, the Cannes Film Festival on Thursday announced a competition lineup with only three films directed by women.

While additional films could still be added to the slate for next month’s festival, the Cannes lineup falls short of the already dismal record of the last two editions. In 2019 and 2021, the festival featured four films by female directors. 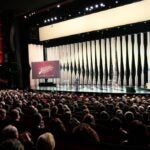 In the Un Certain Regard section, devoted to films with less visibility than the main competition entries, eight of the 15 films are from female directors, including “Beast” from Riley Keough and Gina Gammell.

Four years ago, Cannes general delegate Thierry Fremaux, Directors’ Fortnight artistic director Edouard Waintrop and Critics’ Week head Charles Tesson became the first signatories of the Programming Pledge for Parity and Inclusion in Cinema Festivals, which was drawn up by the French gender-parity group 50/50 by 2020.

Up to that point, only 82 women had had films in the main competition in the 71 years of the festival, compared to more than 1,600 men.

The festival will open on May 17 and run through May 28. The dates mark a return to Cannes’ usual May slot after it was canceled in 2020 and moved into July in 2021 because of the pandemic.