Spoiler alert: This article discusses the entirety of the “Only Murders in the Building” Season 2 finale, “I Know Who Did It.”

What motivates someone like Poppy (Adina Verson), fka Becky, Cinda Canning’s (Tina Fey) oft-belittled assistant, to mastermind a murder worthy of not one, but two true crime podcasts? According to the “Only Murders in the Building” star themself, a “deep-seated need” for recognition, if not overt notoriety.

In the Season 2 finale of the Hulu dramedy hit, viewers get a glimpse into Poppy’s internal life and machinations, peeling back the layers of what she — along with Michael Rapaport’s crooked cop Det. Kreps — would have to gain in killing former Arconia board president Bunny Folger (Jayne Houdyshell). Before manufacturing her disappearance and faking her murder in a small town in Oklahoma, Becky-slash-Poppy was glossed over in every aspect of her life; in Verson’s words, she was not being recognized for being a smart woman, caring daughter or “really existing at all.”

“Once she plotted her escape, I think that that gave her a lot of confidence as to how smart she is and how she can play everybody,” the nonbinary actor told TheWrap in an interview. “I think that she’s kind of incredible, but she’s still not getting any recognition because it’s all in secrecy. This deep-seated need that she has to be recognized just builds and builds and builds. And at the same time she’s living in this veil of secrecy that I think allows her to feel like she can get away with anything, and that morality maybe no longer applies to her.” 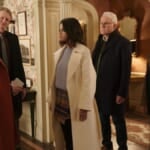 Going into Season 2, Verson said they were aware from the get-go that their character would be the killer, having sat down with executive producers Jess Rosenthal and John Hoffman over Zoom.

“They told me my trajectory for the season, and I was thrilled-slash-terrified,” Verson said. “I didn’t get any scripts, but they gave me a general overview. And then I was shocked to find out that when I got the set I was the only person who knew.”

As she pictured it, Poppy is a “really good liar,” leading the actor to play the role close to their vest throughout the duration of the season: “I decided it was best to just play it episode-by-episode for what’s on the page and let the writing kind of plant the seeds. They did a pretty good job of keeping her out of your thoughts.”

In the finale, “I Know Who Did It,” the show capitalized on the “disorienting” nature of its sophomore installment, which resulted in an Agatha Christie-inspired denouement. With plenty of twists and turns specifically designed to “press Poppy’s buttons,” Episode 10’s killer reveal party eventually cracked the criminal mastermind’s mousey exterior.

“As Poppy, to see that this whole thing was just to f— with her, to get her to break, is humiliating,” Verson said. “For somebody who is a serious control freak, as she’s literally puppeteering her reality, that’s gotta be terrifying. What she did is inexcusable and unforgivable, but I still feel bad for her that at the end of the day, Cinda knew that that is what breaks Poppy and that’s how she treats her every day.” 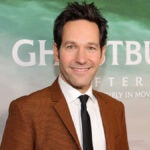 Despite her actions, Verson doesn’t view Poppy as expressly evil. In a way, they said, Poppy’s journey mimics Bunny’s: The connective tissue between their stories — victim and perpetrator — is the “tragedy of unkindness” that reaped their respective ends.

“I don’t personally believe that a 100% villain is actually anything that exists,” Verson explained. “So I did like that [the writers] have sympathy for her, which is crazy to have sympathy for someone who stabbed somebody eight times. I think anybody that is going to do something so horrific has been driven to it, for some reason or another — not to say that that excuses it at all.”

As for how Kreps fits into the picture, Verson views the relationship as Poppy “using him to her benefit.” They added, “I think that she originally saw him as a way to easily have a place to live. And then she used him quite a bit in her own case to plant evidence that she had been murdered. And he also is kind of dumb and so she’s able to manipulate him. Maybe she doesn’t even realize, maybe she lies to herself, also, to justify a relationship with him.”

Funnily enough, ahead of getting the full script for Episode 10, Verson said she was handed a Day out of Days Report that could perhaps shed more light on the bizarre romance.

“It just said, ‘Poppy Kreps love montage.’ They ended up rewriting ’cause the script wasn’t done at that time, so it ended up just being that one scene, but I was like, What?! Thinking back now it would have been so funny to have a love montage of the two of them like, I don’t know, skipping. Like killing a squirrel and laughing about it.” 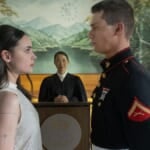