(Warning: This post, which was originally published Aug. 31, contains spoilers for Episodes 1-3 of Hulu’s “Only Murders in the Building.”)

Though the trio of Arconia residents who are diving into the mysterious death of the neighbor who is (seemingly) a stranger to all of them clearly still have a ways to go to figure out what really happened — while learning how to properly make a true-crime podcast — the audience is now aware of one very key plot point that Oliver and Charles are not: Mabel was good friends with Tim Kono as a child.

What possessed Mabel to lie about something that is sure to eventually come out while working so closely on the case with Oliver and Charles, who are now eyeing Sting (right, the singer) as their prime suspect? 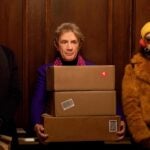 “I lean into the human response because I think she’s in shock about so much of it when it first happens and she’s just rolling with what’s happened,” John Hoffman, who co-created “Only Murders in the Building” with Steve Martin, told TheWrap. “Now, also, as we learn more about what that relationship is to the victim, we will know there’s many questions she has, having been completely cut off and out of touch with him for 10 years.”

This is when Hoffman revealed to us the true-crime story that was his basis for the circumstances surrounding Tim Kono’s grisly death, and how deeply intimate the story behind the 10-episode Hulu show actually is.

“In crafting this story, there’s a personal connection I have to a mystery like this,” the writer said. “And it just so happened that in tragic form, a year before I started writing this show, a friend of mine was found dead on his floor with someone else and it was deemed a murder-suicide. And, with my friend being the one who had committed suicide and committed murder, I couldn’t fathom that at all based on the person I knew. But I hadn’t spoken to him in over 20 years, and he was very dear to me when I was growing up. So I went on a mission to find out what the hell has happened here. And my gut told me, that is impossible. And by the end of the year of truly investigating, going to Wisconsin, meeting his family, meeting his kids, learning what his life had become, the whole case had been investigated and reversed. And the truth was, he was killed… That sounds very dark for a lovely comedy series like this. But it was close to Mabel’s experience.”

He added: “So I was going off of my own experience of feeling removed from someone’s life, and yet a gut feeling of something’s wrong. And yet, for Mabel, there’s also the fear of, does this tie in to something that we shared years ago and could it put me at risk now? So the secret she keeps from Charles and Oliver, actually, is out of protection for them. Because she doesn’t know, is this something that’s separate from anything I know about what happened to him — or is this connected to something that I’m a part of and could put me in danger? So she joins up with them thinking, ‘Well, they want to do this, they’re driving toward it, and I’m going to do it, too, because I have to drive toward it. But I also might have someone to do this with, which is way less scary.’ And so that that is compelling her throughout. And she’s also not telling them because she doesn’t want to involve them if it does have something to do with her.”

After going through this “extraordinary, extraordinary year” of looking into his late friend’s death, Hoffman (“Grace & Frankie,” “Looking”) was approached by Steve Martin and “This Is Us” creator Dan Fogelman to collaborate with them on an idea Martin had for a true-crime comedy called “Only Murders in the Building.”

“I was like, ‘Yes! OK!’ And I shared that story, and they said, ‘Then you have to do this show with us.’ And I was like, ‘Oh, this is a terrible way to enter in.’ But on the other hand, it’s in honor, for me, of my dear friend who passed,” Hoffman said.

Ultimately, Hoffman says working on the fictional story of true-crime lovers Mabel, Charles and Oliver’s amateur sleuthing for “Only Murders in the Building,” which is at its heart a comedy, was “great therapy” for him.

“This is really what the show is asking you: Why are people so interested and sometimes, quote unquote, obsessed with true-crime stories? And what’s underneath it for the people who are interested in that? And why are they so interested in that? And usually it has something to do, I believe, with their own lives,” Hoffman said. “All of the unanswered questions they have. All of the injustices that they feel are existing with people they love, people who are attached to themselves in some way. There’s that need to find and declare the truth. All of that is very intriguing to me.” 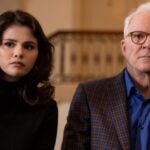 “But also, when you are exploring any of those things, you bump up against things that are really funny,” he continued. “When you’re on the edge of life-and-death questions, you bump up against just the human comedy of it all. And and that, to me, is what allowed sort of a big scope for what we’re doing in the show with the reality of this crime and the moments of human connection and humor and discovery. So that’s where the whole show lives. And it really was my experience when I went investigating this thing. Like, I’ve never done anything like that before in my life, but I could not not do it. And when I went investigating and I was meeting his ex-wife and his two kids, who were the age that I was when I met him, it was crazy. We were sharing old stories, but we were bumping up against things that were just crazy and funny, but wild experiences. So all of it could be held in [a show.]”

As for the “Only Murders” murder, Hoffman says you’ll obviously have to wait to find out the truth behind Tim Kono’s death — though he promises it will be revealed by the end of the season. However, we did ask him if we were paying really close attention, did he and Steve Martin give us enough information in the show’s series premiere (so just Episode 1, we’re not counting the also-available Episodes 2 and 3!) to figure out the answer?

“That’s a very good question. Let’s see. I would say that’s highly unlikely,” Hoffman said. “I want to place the audience in the minds of our investigators, our amateur investigators. And, at the very beginning, it’s based on gut. It’s based on discrepancies. It’s based on a feeling of human behavior and what people do and what people wouldn’t do, in regards to the question of suicide versus murder. And that’s really the beginning domino here. And it’s all based on their own experiences and feelings of true-crime love that they have shared. But something is off, and that’s all you should feel. Something’s off about this.”