A version of this story about David Heyman and Emma Tillinger Koskoff first appeared in the Down to the Wire issue of TheWrap’s Oscar magazine.

For producers, landing two Best Picture nominations in a single year is one of the rarest Academy Award accomplishments. Since the Oscars began crediting individual producers in 1951, only seven have managed the feat — and two of those came this year, when David Heyman (who produced Quentin Tarantino’s “Once Upon a Time … in Hollywood” and Noah Baumbach’s “Marriage Story”) and Emma Tillinger Koskoff (Martin Scorsese’s “The Irishman” and Todd Phillips’ “Joker”) each turned the trick, the first time two producers have ever done it in a single year for different films.

A few minutes before they were due at the Producers Guild Awards on Jan. 18, Heyman and Koskoff sat down with TheWrap to talk about their rare accomplishment.

At events like tonight’s, do you guys have a problem figuring out where to sit?
EMMA TILLINGER KOSKOFF I’m with “Joker” tonight — but yeah, it’s a little challenging, to say the least.

DAVID HEYMAN I’m lucky, and I’m sure that you are, too, in the sense that both directors really like each other and admire each other. At the Governors Awards, the first awards of the year, I made sure they put Quentin and Noah close together, and it was clear that they get along. So it makes it a little bit easier. But still, you want to give time to each, and it’s Sophie’s choice sometimes.

KOSKOFF Right. You want to be able to share the love for both of them.

HEYMAN But how fantastic to be in this position. And actually, I find that sometimes it’s not the directors themselves, it’s the people around them who get anxious.

The first reaction to seeing a producer with two Best Picture nominees in the same year is, “How did you find the time?”
KOSKOFF It worked out really well for me. I wrapped “Irishman,” 108 days of shooting, and I think I had a long weekend and then I was in a scout van with Todd. Postproduction on “Irishman” was going to be longer than usual given the visual effects, and we were shooting “Joker” in New York, so it worked out perfectly for me in terms of timing and location. I was able to check in on the cutting room when I needed to.

HEYMAN Same for me. One after the other.

KOSKOFF Wow. Are you based here, or in London?

HEYMANN I’m mostly London. So my family moved out here for the three months of the “Once Upon a Time” shoot, which is a nice way to visit L.A. And Quentin’s really inclusive. Every Friday night he has dailies and he invites the P.A.s and the movie stars. Everybody comes, there’s pizza and margaritas and wine and beer, and it’s celebratory, he’s sitting in the center enjoying the work with all of them. My wife came to some of those, and it really does create a family with the people he’s working with.

Also Read: Quentin Tarantino on What Happened to Leonardo DiCaprio's Character After 'Once Upon a Time ... in Hollywood' 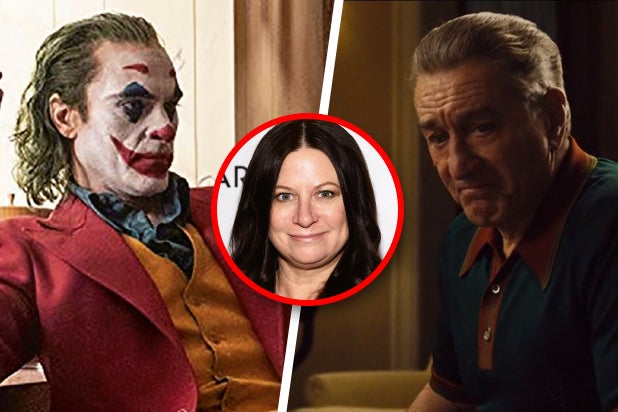 From an outsider’s perspective, it looks as if each of you is nominated for one movie that was probably an enormous undertaking, and the other that was of a more manageable scale. But I don’t know if it feels like that when you’re making them.
KOSKOFF It doesn’t. I will say that I like a 58-day schedule versus a 108-day schedule. (Laughs) But other than that, both of my films were shot in New York, which is an incredibly challenging city to shoot in. With “The Irishman,” we had a massive footprint, and sometimes two or three moves a day. But “Joker,” Todd moves so quickly it’s shocking. We were always running.

I assume you find yourself adjusting to the director, each of whom requires a different approach.
HEYMAN Yes. As a producer, you’re supporting the director and their vision, and you adapt to their needs and their idiosyncrasies. For me, it was the first time that I’d worked with either one of these directors, and it took a moment for me to know them. It was a learning process every day.

For Noah, the important thing was creating the space for him to do his work. His actors go to such brave, open, exposed places, and it’s about creating the space for them to do that. With Quentin, he’s a much more flamboyant character, he’s a vivid personality. But it was about marshaling that and being there to talk to him when those conversations needed to be had.

KOSKOFF For me, I know Marty so well and I know very well how to produce for him and anticipate needs or issues that are going to come up. And again, it’s my priority to create a space for him and his actors and creative team to do their thing with the least amount of production interference.

With Todd, I really didn’t know what I was getting into. And what I realized with him, oddly enough, is that he is almost a producer first. He has a major producer hat on at all times. And I finally had to say to him, after week one, “You’re going to have your hands full. You have to take that producer hat off and let me take it on.” Todd hadn’t really worked with a producer in the way that he and I worked together, and I tried to encourage him to let all of that go so that he could have that intimacy with his actor.

For both of you, one of the films was for a major traditional Hollywood studio and the other was for Netflix. How different was that?
KOSKOFF We were going to have the best theatrical release we could with “Irishman” — so we had that component, which was great. I think the Netflix model is great. There’s so many people who can’t necessarily afford a night out to the movies or have movie theaters near them anymore, ’cause they’re evaporating. I commend Marty for being such an advocate for cinema, and yet he’s always willing to stay current and he’s not afraid of new things.

And I say it at every opportunity: Ted (Sarandos) and Scott (Stuber) are the greatest partners ever at Netflix. The freedom and support we were given — I would make every movie with them if I could.

HEYMAN I echo what Emma just said. You’re making a film to be seen on the big screen as much as possible. But the thing is, in a time where it’s harder and harder to get original films made, Netflix is making them. “The Irishman” wouldn’t have gotten made without Netflix.

HEYMAN Noah’s movie, they came in when we needed them with not even a moment’s hesitation, and they were tireless in their support. The issue at the moment is the relationship between the streamers and the theater owners. And not just them — the studios, too, are having those conversations. I believe the model has to change.

HEYMAN And we’re going to move to a shorter window. When the studios are putting all that money to a theatrical release, to not then be able to use those assets to feed into the next stage is crazy. So I have nothing negative to say about Netflix. I would make a film with them in a heartbeat.

Also Read: Editor Thelma Schoonmaker Is Surprised by How Long 'The Irishman' Is Too 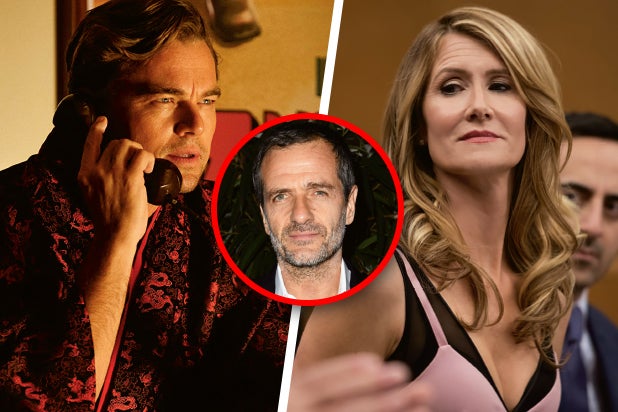 When you’re shooting films like these, do you have a clear sense as you’re making them of what they’re going to be like in feel, scale, length?
KOSKOFF I knew going in that we were going to be three-plus hours. I’ve made enough movies with Marty – they’re long, and I knew the scope and scale of what we were shooting.

HEYMAN I think that’s right. And I think length is a strange thing. A 90-minute film can feel a lot longer than a three-and-a-half-hour film.

I think with both films, I had a sense of what they would be. Noah and Quentin are great writers — and because they’re also directors, they conjure a world that is so vivid and clear. But there are still discoveries with each viewing.

I would think that however it reads when, say, Adam Driver’s character sings Sondheim in “Marriage Story,” it can’t have the impact of when he actually does it.
HEYMAN That’s absolutely right. That moment was just devastating. And also, the end of Quentin’s movie. When you see Leo say to Brad, “You’re a good friend, Cliff,” and Brad says, “I try” — you feel this friendship, you see Rick coming to terms with his life and reaching a place of gratitude and acceptance. I loved it when I read it, but when I saw it, it resonated with me in a way that I could not imagine.

Also Read: Scarlett Johansson and 11 Other Stars Who Snagged 2 Oscar Nominations for Acting in the Same Year (Photos)

Obviously, each of you had two films that were in the conversation during all of awards season. Did you know how few producers before you had received two Best Picture nominations in the same year?
HEYMAN I did look it up, actually. I noticed the first people to have done it and I thought, “Oh, my God.” It was Francis Coppola and Fred Roos for “Godfather Part II” and “The Conversation.” And they did it in a year with only five nominees. It’s so humbling.

KOSKOFF Totally. I didn’t even know about it, and somebody said to me, “I think you’re going to make history. You’re going to be the first woman to get two.” But then I found out that Megan Ellison did it. (Laughs) Megan Ellison beat me! (Editor’s note: Ellison received nominations for ‘American Hustle’ and ‘Her’ in 2014.)

I don’t make movies for awards, and I truly mean that. But it’s so lovely and so wonderful. I’m humbled, and I love being tied with this one. (Points to Heyman) I mean, David’s a producer I’ve looked up to through my career, and I’m, sort of like, “What am I doing here?” I’ve got a bit of a…

HEYMAN Imposter syndrome? I have that.

KOSKOFF Imposter syndrome! I for sure have it. It’s not lost on me what an achievement and an accomplishment this is.

HEYMAN I feel the same, you know. And also, how lucky are we? We’re here because we have the good fortune to work with incredibly talented artists who never settle but are always pushing the boundaries of what is possible. And they make everybody they work with better. And also, I love making movies. I’m actually really excited for this to be over, so I can get back to making a movie.

KOSKOFF Yes! I’ve got to get back to Oklahoma — I’m prepping!