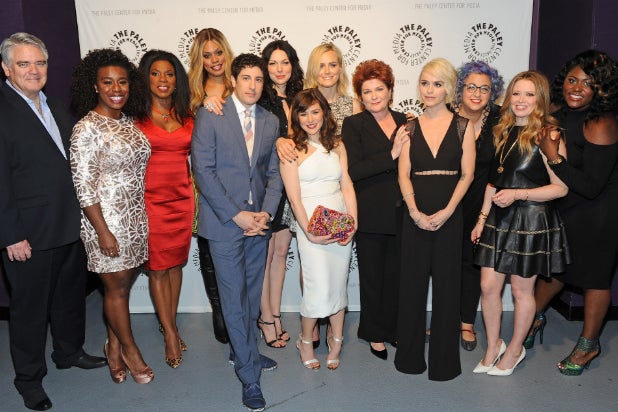 Netflix’s hit women’s prison dramedy “Orange Is the New Black” returns for its second season on June 6, and the stars and creator of the groundbreaking series took the stage at PaleyFest Friday night to talk about what’s made the show a social phenomenon — from the unprecedented roles for women behind and in front of the camera to the issues of race and sexual identity the show tackles.

See video: ‘Orange Is the New Black’s’ Jason Biggs, Taylor Schilling and Cast Answer: Is the Show a Comedy or Drama? (Video)

Life on the Inside
The show centers around Piper Chapman, played by Taylor Schilling, an upper middle class white girl thrown into Litchfield minimum security federal prison with nothing but her own presumptions and prejudices to guide her.

Co-creator and showrunner Jenji Kohan said that critical to achieving a realistic depiction of life inside a women’s prison is a focus not on stereotypes and statistics but on the characters she portrays.

“Our focus is on character… and these people as individuals,” Kohan said.

“And we don’t approach it as like ‘Well what does the black one do, what does the “Latino one do?’ You know these people — you can’t view it as tokenism, you have to view it as people,” she added.

“There’s women out there that are like Taystee,” Brooks said to a round of audience applause.

“It’s about telling a true story and giving voice to those that do not have a voice, and I think that’s what we’re all doing.”

By the same token, the prison guards are treated with the same thorough storytelling.

“They’re all in prison; the guards are in prison too,” Kohan said.

Michael Harney, who portrays friend-turned-foe inmate counselor Sam Healy, said he relished the opportunity to show that the correctional officers aren’t as simple as heroes or villains in the story.

“By us being able to be whole people, we’re able to expose some of the inner conflicts that people that work inside of these places deal with,” Harney said.

In response to a fan question about why Piper — a divisive character among fans and critics alike — comes off as so shallow and unlikeable, Kohan pointed to the diversity of the world.

“Why can’t a character on TV be narcissistic and whiny?” Kohan asked.

“It’s a naturalistic world, and in the world there’s all sizes and colors and shapes and why should that not be accepted?”

“Orange Is the New Black” has been heralded for its frank portrayal of female sexuality and sexual identity, particularly through the storyline of transgender character Sophia Burset, portrayed by transgender actress Laverne Cox.

“For the trans community, a lot of folks — a lot of people are having conversations that they weren’t having before,” Cox said, to a hearty round of applause.

Lea DeLaria, who plays Carrie “Big Boo” Black, joined the cast from the audience to say how the show has changed the cultural perception of butch lesbians.

“Usually when a 16-year-old boy walks up to me on the street, it was to spit in my face and call me ‘dyke.’ And now it’s to hug me and say how much he loves ‘Orange Is the New Black,'” DeLaria said in an emotional moment.

Kohan and the cast credit the organic manner in which these issues are presented in the story for how they’ve been received in the public.

“It’s not confronted; that’s the whole point,” Kohan said. “It’s not ‘The Very Special Episode about the trans character.’ It’s normalized in this conversation.”

Women in Charge
One look at the stage at PaleyFest Friday night says it all: 12 women and two men represented “Orange Is the New Black.”

Surely there are more men in the cast, and others involved in the project on different levels, but on Kohan’s show, women call the shots.

“I remember feeling it reverberate through my being that I had never seen that before, that so many women were calling the shots.”

“And women of color,” Brooks added.

What to Expect in Season Two
Jason Biggs, who plays Piper’s unsympathetic fiancee, gave the audience a preview of what to expect for their strained relationship in the second season.

“When we left Larry and Piper in season one, their relationship was precarious at best, and for Larry, season 2 is pretty much spent trying to figure out if the damage that was done to the relationship is irreparable or if there’s something that they can mend there,” Biggs said.

“I think it’s hard for him to just give up on it, so season two is spent with that sort of turmoil.”

Inside Litchfield, a new character is introduced who upsets the lives of all of the inmates — a “street-wise drug maven” called Vee, played by Lorraine Toussaint.

“I think it’ll be interesting seeing how this character is received, because Jenji has written a character that plays and enjoys the game, and is incredibly engaging and draws people into her — into the big game and has — I have a great deal of fun,” she added

WHAT DID RED DO!?
Fans of the show are familiar with the format — little by little, we learn how these women got sent to jail.

Also read: ‘Orange Is the New Black': What the Critics Think About Netflix’s Prison Comedy

And while audiences have learned quite a bit of kitchen queen Red’s backstory, nobody knows what Kate Mulgrew’s character did — not even Kate Mulgrew!

Nobody except for Kohan, of course.

“I do know what you did and we can talk about it,” Kohan said, to the surprise of everyone on stage and in the audience.

“I wrote the scene and I threw it away, because it didn’t matter.”

But, Kohan said, the scene still exists on a hard drive somewhere, so perhaps viewers can stop writing their “What Red Did” fanfiction and get to the bottom of what landed Red in the slammer.