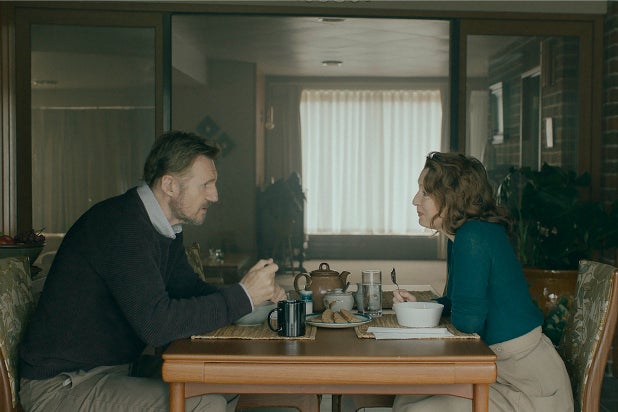 Announcing modest ambitions with its title, “Ordinary Love” tackles melodramatic subject matter with uncommon, quiet elegance. The story of a husband and wife dealing with a cancer scare, directors Lisa Barros D’Sa and Glenn Leyburn’s film offers a beautifully understated look at intimacy and devotion in the face of potentially devastating loss, while stars Leslie Manville and Liam Neeson tap effortlessly into the relatable routines, rhythms and nuances of a lived-in, long term relationship.

Neeson and Manville play Tom and Joan, a married couple whose world is turned upside down when she discovers a lump in her breast that turns out to be cancerous. The comforting ease of their daily lives is thrown into disarray after doctors prescribe a rigorous battery of treatments for Joan, including surgery and chemotherapy, testing their individual fortitude even as it deepens minor rifts in their relationship. Joan finds solace in a fellow cancer patient, Peter (David Wilmot, “Fantastic Beasts: The Crimes of Grindelwald”), who has connections to their past, while Tom attempts to preserve and maintain the life and lifestyle to which they’ve grown accustomed.

As Joan’s treatment disrupts their daily rituals, she and Tom seek common ground even while dealing with the very real risks they face. But over the course of a year, they inspire new hope, patience and resilience in their relationship, and rekindle a sense of connection to and with the outside world they’d foregone in favor of focusing on each other.

Although it comes at the expense of more conventional dramatic ups and downs, “Ordinary Love” is a film that looks very intensely, and delicately, at the tiny, wonderful moments of familiarity between two people that come after years and years together. Tom’s default style of engagement is a dry humor leavened with tenderness; Joan’s wry, fleeting exasperation conceals irrepressible warmth. They understand and accept the comfort of this dynamic as a reflection not quite of a status quo but healthy “ordinary” interaction that reassures them everything’s alright.

The establishment of this dynamic sets up the great arc of the film as their sense of continuity and regularity is disrupted, and the sentiments that lie beneath those reflexive behaviors become harder to conceal. The edges around Tom’s jokes become more embittered, the frustration of a husband who is terrified about the possibility of losing his wife, and can’t do anything to make her feel better. Joan’s jokey annoyance turns real when she succumbs to her own sense of powerlessness, and seeks from Tom serene comfort rather than determined problem-solving. Cancer is the element that throws everything they do and know out of sync, and finding an accord between the long-established past and an uncertain future is the only way for their relationship, much less for them, to survive.

Owen McCafferty’s script explores this challenge with a careful, sensitive patience that recognizes how the fear of mortality becomes a mirror for reflection in every act, often unexpectedly. Where other films might focus on dialogue — the exchanges between Tom and Joan, with doctors, and later between Joan and Peter — D’Sa and Leyburn coax out of each scene a keen observation about what triggers deep feelings, be they fear, sadness or gratitude.

These are more than just a few extra seconds on screen after a conversation is finished; they’re acknowledgments that the moments affecting us are often prompted by random, disconnected events. Moreover, the film observes how we can feel most alone, even in a room with those closest to us, when we’re dealing with life-changing challenges or concerns.

As Joan and Tom, Manville and Neeson showcase the experience of this potential loss with an uneasy, desperately believable grace, wrestling with their characters’ anxieties even as they remind us in every action this is an experience shared between people who know each other intimately. Meanwhile as Joan’s confidante and sounding board Peter, Wilmot offers both a reassuring humanity and a catalyst for Joan and Tom to reach new epiphanies — including some they themselves don’t recognize — as they battle against ultimate loss.

With a title that’s deliberately unshowy, D’Sa and Leyburn’s film runs the risk of phony nobility in its treatment of sensitive subject matter, an exercise in social realism that evokes or condenses Mike Leigh-style drama to a collection of tearjerking vignettes. But ultimately, “Ordinary Love” is a celebration not just of this functional, delightfully average relationship, but also of life itself, risking and wrestling with loss not in spite of the fact it’s shared with others, but precisely because of that fact.