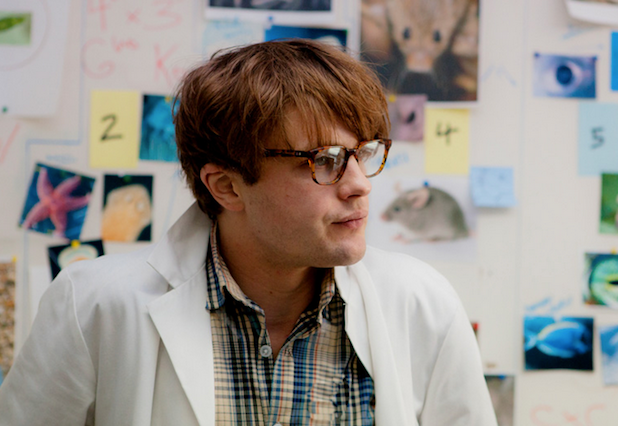 In “I, Origins,” Michael Pitt plays a scientist obsessed with the significance of the eye. Is is a window to the soul? Is there a soul? If so, can it be scientifically proven, or systematically measured? Writer-director Michael Cahill is deeply interested in where the spirit meets the physical, as “I, Origins” is his second film in a row to deal with metaphysics, on the heels of “Another Earth,” which also debuted at the Sundance Film Festival in 2011.

“I’m fascinated by the question, ‘Where do atoms stop and the spirit begin in a human being?” asked the lanky, long-haired Cahill at the premiere screening this weekend in Park City. “Clearly I’m chasing after something.”

Clearly. In the film, Pitt plays Ian Gray, a scientist exploring the evolution of the eye, mapping the individuality of each iris. He works with fellow scientist Karen, played by Brit Marling. But after he falls in love with a mysterious, spiritual woman, played by Astrid Berges-Frisbey, captivated by her distinctive eyes, he begins to pursue a path of connection suggested by his research.

Are people connected after death, through their eyes?

The journey takes him to India, where he meets a young girl who is a street urchin – but who seems to have the same eyes, and perhaps the sense memory, of another person who has died. Although the movies are about eyes, it used a special audio system by Dolby to be presented at the Eccles theater, using 128 audio channels instead of the usual five, and 42 extra speakers. Buyers took a liking to the film, and Fox Searchlight acquired the distribution rights Monday.

Marling, who also starred in “Another Earth,” said that she was fascinated by Cahill’s thinking patterns. “I’ve been in awe of Mike since I was a teenager, and I’m in awe of him now.”

“I like to look at where things are painful, and find the most beautiful thing I can,” said Cahill: “Science fiction does that. I’ll probably keep digging at that, and soon.”