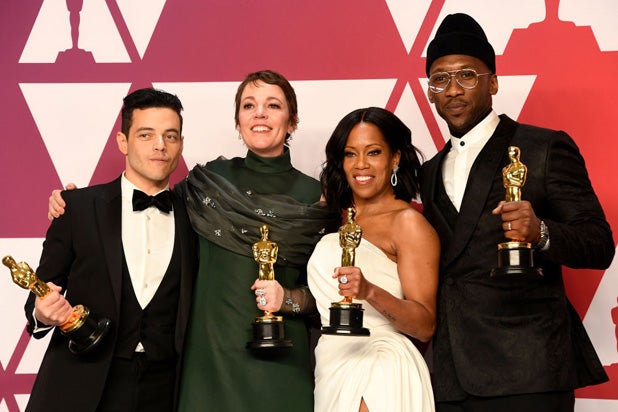 “Green Book” shouldn’t have been able to win. In an era where representation and diversity is of paramount importance, it was another movie about race relations from the perspective of the white man. The reviews were middling, it didn’t have a Best Director nomination, it lost at the Writers Guild Awards and it was up against Netflix’s big-money campaign for the year’s clear critical favorite, “Roma.”

“Green Book” should have been the wrong movie at the wrong time, too divisive to be named Best Picture at the 91st Academy Awards. But this was a year when almost everything was divisive — there was no consensus choice to sweep to a win, which opened the door for a film with strong negatives to win the top prize, because it also made a lot of people feel good when they saw it.

And after an awards season that took the conventional wisdom, trashed it, chewed it up and spit it out, the winner was a movie that once upon a time would have made for a thoroughly conventional Oscar winner.

Credit the old guard of the expanded Academy, holding the center against an influx of diverse international voters over the last three years.

Credit the fact that Hollywood is still full of professionals who consider Netflix the enemy of the movie business and would put “Roma” low on the ballot just to keep the streaming company from winning the big one.

Credit the fact that this was a pretty mainstream group of Oscar Best Picture nominees — “Roma” and “The Favourite” were art movies, but everything else was relatively commercial — and when the preferential system of vote-counting was finished reshuffling the ballots, it came up with a mainstream winner.

And above all, credit “Green Book” itself, which put a familiar and even clichéd story on the backs of two exceptional actors, Viggo Mortensen and Mahershala Ali, and took their likability on a road trip where you knew where they were going but didn’t care because they were such engaging traveling companions.

Sure, there will now be an outcry. The credibility of the film’s portrayal of pianist Donald Shirley (played by Ali) will no doubt be questioned again and again. The fact that we’re still seeing race relations from the white man’s perspective will be dissected and slammed (as will the producers’ failure to even mention Shirley from the stage of the Dolby Theatre).

Some will clear a spot for the film on the “Worst Best Picture Winners” lists alongside “Crash” and “The Greatest Show on Earth.” And we’ll hear lots about how in 1989 Spike Lee (and “Do the Right Thing”) lost to “Diving Miss Daisy,” and now 30 years later Lee lost again to an old-fashioned movie about racial differences being healed in a car, “Green Book.”

Spike has held his tongue and not directly criticized “Green Book” in recent weeks, no doubt in recognition of Academy rules against trash-talking fellow nominees, but you can bet that he’ll have a few choice words now.

Of course, a divisive winner is the nature of the beast in these dark, divisive times — there would have been complaints if “Roma” or “Black Panther” or “BlacKkKlansman” or “Bohemian Rhapsody” had won, too.

But a show that gave its top award to “Green Book” and made “Bohemian Rhapsody” the night’s biggest winner in total prizes could only stoke the ire of film critics and drive cinephiles on Twitter into overdrive.

As for the rest of the show, the Academy went hours into the show without a single surprise before dropping a big one at the end of the night when “The Favourite” star Olivia Colman beat Glenn Close for Best Actress. That not only made Close the actress with the most nominations without a win (seven), it gave every single one of the eight Best Picture nominees a win, something that has only happened one other time since the category was expanded beyond five nominees (in 2015).

Even without many surprises, the ceremony had an historic feel to it — a testament, perhaps, to the new, more diverse group of voters. In the first 90 years of the Oscars, only one black woman had won an award in a non-acting category; in the space of three awards in the first 40 minutes of Sunday’s show, two more names were added to that list.

By the end of the night, the Academy had set records for black winners and for female winners.

The wins, though, were a mixture of the bold and the safe, with voters honoring edgy movies and feel-good ones in equal measure. One segment, in which Samuel L. Jackson and Brie Larson presented the writing awards, summed it up: Best Original Screenplay went to “Green Book” over the more twisted “The Favourite,” and then Best Adapted Screenplay gave Spike Lee the first competitive Oscar of his career, for the incendiary “BlacKkKlansman.”

And in the end, maybe the 91st Oscars are an accurate portrait of a diverse but divided Academy: forward-looking at times, open to diversity to a far larger degree than it used to be, and also looking for old-fashioned pleasures regardless of how out of step they may feel.