The Academy would like to invite you to attend the 82nd Academy Awards.

Well, not exactly attend the awards. But they’d like to invite you to be there.

Outside. In the bleachers. Overlooking the red carpet.

If you win their lottery. And pass their security check.

Some years you get wet, some years you get baked by the sun, and one year you would have gotten evacuated when a canopy over the bleachers started to collapse – but it’s the closest most people can get to the Academy Awards without making a movie that gets nominated. 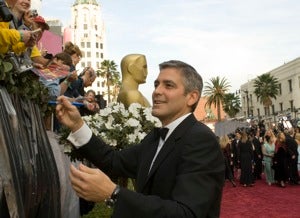 Most every star will wave to you, though they’re pretty busy talking to the press that lines the other side of the red carpet. And a few, like for instance George Clooney (right; photo: AMPAS), has been known to hop the barricade and sign an autograph or two for the fans.

Plus, once the show starts the Academy will take you to a nearby theater where you can watch the whole thing.

Applications will be taken for one week, beginning next Monday.

The details and the application are here.

The press release explaining it all is here.

The odds are not good (they’ve had as many as 20,000 applicants for the 700 seats) … but if you want to get near the Oscars and you’re not in the movie business, why not?