The lengthiest and weirdest awards season ever is at long last in the homestretch, and in many categories it doesn’t seem hard to figure out what’s going to happen at L.A.’s Union Station on the evening of April 25.

But we still have some questions as the 9,300 Oscar voters (that’s not an estimate or a rounded total — it’s the exact number of eligible voters) head into their last weekend to catch up on whatever they haven’t seen before ballots are due at 5 p.m. on April 20.

Here are some of the lingering unanswered questions:

1. Will “Nomadland” need No. 2 votes to win Best Picture? And if so, will it get them?
Best Picture is the one category that uses ranked-choice (or preferential) voting to determine a winner, which gives it a whole different dynamic than the other 22 categories. In those other categories, it’s simple: You vote for your favorite, and the person or film that gets the most votes wins. In Best Picture, voters rank all the nominees in order of preference — and unless a movie is the No. 1 choice on more than half the ballots, it’ll need to forge a winning consensus by being ranked second on enough ballots whose voters’ first choices fall out of the running.

Based on its wins at the Producers Guild and Directors Guild Awards and BAFTA, “Nomadland” will almost certainly get more first-place votes than any other film. But will it be ranked first on half the ballots? It’s a stretch to think that Chloé Zhao’s quiet road movie is that popular.

So it’ll probably need to be ranked high on other ballots, too — but anecdotal evidence suggests that “Nomadland” is more divisive than many of the other top films. This could be one possible road to an upset victory by a more universally acceptable choice like, say, “The Trial of the Chicago 7” or “Minari.” That outcome feels unlikely, but ranked-choice can be a cruel mistress — there’s a reason why the winner of Best Director (which doesn’t use ranked-choice, and which will almost certainly go to Zhao) has failed to match the Best Picture winner five times in the last eight years. 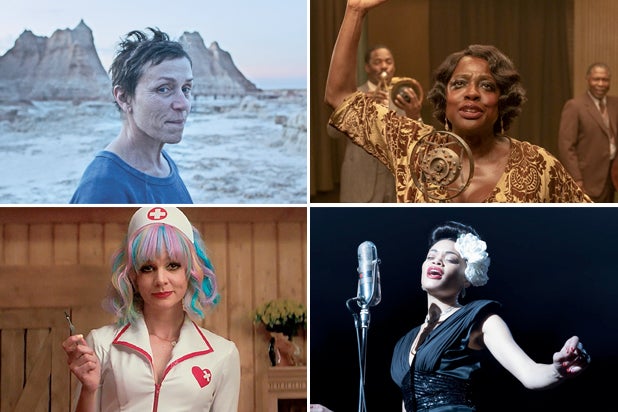 2. Who the heck will win Best Actress, anyway?
There hasn’t been an acting category this wide open in years, because the last time four different actresses won the Golden Globe, the Critics Choice Award, the SAG Award and BAFTA was, well, never. Andra Day won at the Globes for “The United States vs. Billie Holiday,” Carey Mulligan at the CCA for “Promising Young Woman,” Viola Davis at SAG for “Ma Rainey’s Black Bottom” and Frances McDormand at BAFTA for “Nomadland” — and any of the four could quite conceivably win on Oscar night. (Sorry, Vanessa Kirby.)

Day might have the toughest road because she’s the only nominee from her film, but Julianne Moore won as the only “Still Alice” nominee in 2014 and Charlize Theron as the only one for “Monster” in 2003. Mulligan and McDormand have the advantage of being in films also nominated for Best Picture, but Davis’ film could well end up winning as many awards as “Promising Young Woman” or “Nomadland.”

At the moment I might give a slight edge to Mulligan, but this one really seems too close to call.

3. Is it possible for a movie to gain momentum when all those events where buzz would spread are happening virtually?
Last year, one of the keys to “Parasite” winning Best Picture came at the Screen Actors Guild Awards, when the film won the ensemble-cast award and the crowd gave them a lengthy and rousing standing ovation. At that moment, Hollywood discovered just how much it loved giving awards to this group of South Koreans, even if they didn’t know the actors’ names well enough to nominate them for individual awards.

But there are no moments like that this year, because rooms like that one don’t exist and buzz doesn’t spread in virtual lobbies the way it does in physical ones. It may be that “The Trial of the Chicago 7” picked up some momentum by winning the SAG ensemble award, or that “Promising Young Woman” peaked in January and February and is now fading. But really, we don’t know.

4. Will Netflix be happy at the end of the night?
The streaming giant racked up 35 nominations, leaving second-place Amazon (12 noms) and all the traditional studios in the dust. But Netflix led all studios last year with 24, and then watched “The Irishman” go 0-for-11 and the company overall go 2-for-24, with its sole wins coming for Laura Dern in “Marriage Story” and the documentary “American Factory.”

This year Netflix will surely do better, but “Chicago 7” is in danger of being shut out and “Mank” may only win one of its field-leading 10 nominations. “Ma Rainey,” though, seems good for at least three wins (Chadwick Boseman, makeup and costumes) and a couple of other films could bring home statuettes.

The ace in the hole that could push the company to eight or nine wins, though, may be the short-film categories: The streamer has potential winners in the animation and documentary shorts categories, and its post-nominations pickup of the live-action short “Two Distant Strangers” could quite possibly give it a shorts sweep.

5. And really, does anybody actually know what will happen this year?
This is the real question, and it touches on everything else here. The past season has been so odd that precedents and precursors may end up being meaningless — and while things seem to be moving toward a night with big wins for “Nomadland,” Chadwick Boseman, Daniel Kaluuya and Yuh-Jung Youn, maybe we pundits have all been lulled into a false sense of confidence.

After all, 2020 has been messing with us for a long time — why should it stop now?