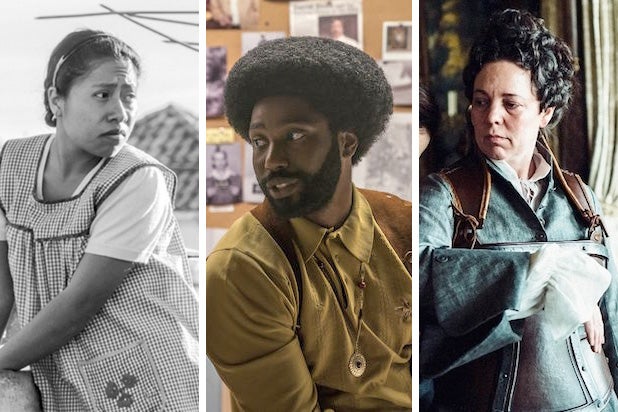 Oscars voters didn’t exactly embrace the concept of the “Popular Oscar,” the award the Academy briefly tried to institute for this year’s show before abandoning the effort.

Sure, they gave a Best Picture nomination to “Black Panther,” the first comic-book movie ever nominated in that category and the year’s box-office champ with grosses that have topped $700 million in the U.S. And they gave nominations to two other films that are in the 2018 box-office Top 20: “A Star Is Born” and “Bohemian Rhapsody,” which have both topped $200 million to sit at 12th and 13th place on the list.

In truth, the mere presence of “Black Panther” in the Best Picture race ought to be enough to bump up ratings for the Oscar telecast, and “Bohemian Rhapsody” and “A Star Is Born” won’t hurt either.

But two films that lead in nominations are uncompromising indies, not would-be blockbusters: idiosyncratic Greek director Yorgos Lanthimos’ twisted period piece “The Favourite,” which has made $23 million to stand at 97th place on the year’s box-office chart, and Alfonso Cuaron’s black-and-white memory piece “Roma,” whose grosses are a mystery because its distributor Netflix doesn’t report them.

And many of the other leading nominees — “Vice” with eight nominations, “BlacKkKlansman” with six, “Green Book” with five — also sit in the lower reaches of the box-office charts.

So this year’s nominations were really a declaration of independence by Oscar voters, an insistence on finding their favorites (and their “Favourites”) across the spectrum and, for the most part, ignoring outside pressure.

“Green Book” has been assailed for its white-man’s perspective on racial issues? So what? Voters were moved by it.

“Roma” is from Netflix, the supposed enemy of the theatrical business? Voters saw it as a singular achievement regardless of platform.

In the end, “The Favourite” got a significant boost, “Roma” showed unexpected — and badly needed — acceptance from the Academy’s huge Actors Branch, “BlacKkKlansman” secured its standing as a major contender and “Vice” did everything it needed to do and then some.

But “A Star Is Born,” which took hits when it lost at the Golden Globes, Critics’ Choice Awards and Producers Guild Awards, took another shot to the head when the Directors Branch opted not to nominate Bradley Cooper. The Warner Bros. film’s only real chance at this point is to mount the kind of sympathy campaign that pushed “Argo” to Best Picture when the same branch bypassed Ben Affleck in 2013 — and that’s an extreme long shot after the film’s previous stumbles.

And “Green Book,” coming off a triumphant night at the Producers Guild two days ago, now faces a similar hurdle in trying to win Best Picture without a Best Director nomination for Peter Farrelly. It can be done (“Argo” did it, and before that “Driving Miss Daisy,” to which “Green Book” has been compared), but it usually isn’t done.

The landscape in the aftermath of the nominations has “Roma,” “The Favourite,” “BlacKkKlansman” and maybe “Green Book” in the top rank, “Vice” and “A Star Is Born” a couple of steps back, and “Black Panther” and “Bohemian Rhapsody” happy to be invited to the party.

And it means that this is going to remain a tight, confusing and quite possibly ugly race for the next month, with the upcoming Screen Actors Guild Awards and Directors Guild Awards unlikely to clear anything up.

In other categories, there was good news: Voters liked the Coen Brothers’ delicious “The Ballad of Buster Scruggs” more than we thought, Paul Schrader got his first Oscar nomination ever for writing “First Reformed” and Caleb Deschanel’s stunning cinematography for “Never Look Away” gave foreign-language films three of the five nominations in that category.

There was bad news: Ethan Hawke couldn’t get a nom for his riveting performance in Schrader’s film, Barry Jenkins’ luminous “If Beale Street Could Talk” apparently didn’t make it to the top of enough screener piles, Justin Hurwitz was overlooked for his magnificent “First Man” score after winning the Golden Globes and Critics’ Choice Awards and South Korea is still without foreign-language nomination despite its critics’ darling “Burning.”

And there was baffling news: “Won’t You Be My Neighbor?” could only have failed to land a Best Documentary Feature nom because too many voters figured it was safe.

And now there will be some contentious debates about race as “BlacKkKlansman” is pitted against “Green Book,” a batch of additional musings about Netflix’s place in the Oscar race and probably a short-film spat or two.

But the voters liked what they liked, and they didn’t let critics or pundits or dirt-diggers tell them otherwise. They painted us a nice muddy picture that probably won’t get much clearer until Oscar night.