Monday’s Oscar Nominees Luncheon tried hard to be a normal event. But in this odd, stop-and-start, elongated awards season, it should come as no surprise that it didn’t quite pull it off.

The annual event, an Academy Award tradition since the early 1980s, was celebratory and collegial, as this luncheon always is. But it also had a tentative air to it, as if nobody was quite secure with the idea of gathering, largely unmasked, in a tightly-packed room at the Fairmont Century Plaza – and the fact that the usual “class photo” was not taken in one big group but in about 10 separate photos of smaller groups of nominees made things even odder.

“This. Is. The. Year,” said Oscar show producer Will Packer in his speech welcoming 169 nominees to the event. “If there was ever a time to revel in a celebration, this is the year.” 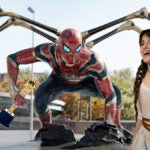 But between COVID and Ukraine and a recent plan to change the Oscar show, this was also a year to question celebration, and there was some of that going on as the nominees gathered. The specter of the pandemic hung over the event, both in the fact that everyone was required to not only show proof of vaccination but also to have tested negative in a PCR test either Saturday or Sunday. “The Power of the Dog” director Jane Campion was one of those who couldn’t meet that requirement: Although she has no symptoms, she’s tested positive and is currently isolating and hoping for a negative test before this weekend’s Directors Guild Awards.

The war in Ukraine, meanwhile, was mentioned by Academy President David Rubin at the beginning of his own opening remarks, when he said that the Academy stood behind the people of that country.

As for the unpopular plan to hand out eight categories in the hour before the Oscars telecast begins, and then shorten them and edit them into the show, both Rubin and Packer conspicuously avoided mentioning that in their remarks. But it was still a topic of conversation at tables around the ballroom, with most nominees coming down soundly on the side of giving all 23 categories a full live presentation.

“I’ve tried to speak out against it, and I’ve also talked to the Academy in person about it,” director Guillermo del Toro said. “I don’t think I’m having any effect, but those categories are the reason for the Oscars to exist.”

“It’s very odd,” added “Belfast” supporting actor nominee Ciaran Hinds. “From my perspective, it can’t be all about the glamorous bits – it takes everybody to make a movie, and they should all be recognized.”

One longtime Academy member urged caution, saying, “I have to believe that every single person in charge of this is absolutely aware of all the issues, and will treat every nominee with respect.” But it was more common to find people who agreed with the nominee who requested anonymity and then said flatly, “It’s f—ed.”

Still, the nominees had time to shrug off that particular tempest and do what usually happens at the nominees luncheon, which is to relax and celebrate their nominee-ness, free of (most of) the competitive nature of most other awards season events. “I would never have dreamed of this, it was never even a bucket-list item,” said Hinds as he walked into the lobby at the beginning of the luncheon.

Nearby, his director, Kenneth Branagh, thanked former Academy president Sid Ganis for giving him his first directing job in Hollywood with “Dead Again” in 1991, while Javier Bardem chatted with his “Dune” director Denis Villeneuve as he waited for his wife, Penelope Cruz, to finish doing some press. 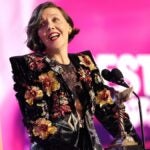 Typically, nominated couples have to sit apart at the nominees luncheon, which has rules that you don’t sit at a table with anyone from your movie or anyone in your category. But Bardem and Cruz were nominated for different movies, he for “Being the Ricardos” and she for “Parallel Mothers,” so they were safe and could sit together at what turned out to be a very star-studded table whose other guests included Steven Spielberg and “CODA” writer-director Sian Heder, who brought that film’s star, Emilia Jones, as her guest.

First-time attendees included “Encanto” composer Germaine Franco, the first Latina composer ever nominated for an Oscar, who brought her mother, and Best Actress nominee Jessica Chastain, who hadn’t been able to attend the luncheon after her nominations in 2011 and 2012. Nominated for playing televangelist Tammy Faye Bakker in “The Eyes of Tammy Faye,” she brought as her guest Steve Pieters, a gay man whose television interview with Bakker provided a key moment in the film, and in Bakker’s embrace of the gay community despite her conservative Christian background.

With last year’s event canceled because of the pandemic, this was the first Oscar Nominees Luncheon in more than two years, as well as the first in the Century Plaza. (Except for one at the Hollywood & Highland Center, all the previous luncheons have taken place at the Beverly Hilton.)

But some traditions never die: The show’s producer told the nominees to keep their acceptance speeches short and heartfelt, and then showed a video in which Kate McKinnon said the same thing in the guise of a fictional actress from the 1930s, Gloria Concave. (That particular video was made for a previous luncheon, but it’s safe to say that most of the nominees hadn’t seen it before.)

Packer, though, brought more enthusiasm to his speech than most Oscar producers, and at times played the room like a standup comic. “You,” he told the nominees, “are the talented people who have tricked your peers into believing that you are better than them.”

Those talented people got their usual “class photo,” but it was dramatically different than all the previous class photos. Groups of 10 to 15 nominees had their names read by actor Alfred Molina and went to one of two stages at opposite ends of the room, where they were directed to stand on (slightly) socially distanced spots and photographed as a small group; then another group was called to the stage at the other end of the room.

And those individual photos are just for the nominees: Unlike every other year, the Academy is not planning to release a full photo of the Class of 2022. 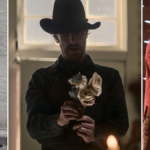 Winners in the Nominees Luncheon Applause Meter, which usually doesn’t tell you much about who might actually win an Oscar, included Chastain, Maggie Gyllenhaal, Will Smith (who high-fived everybody on his way to the stage), “Flee” director Jonas Poher Rasmussen, Aunjanue Ellis, Ahmir “Questlove” Thompson, Denzel Washington (who high-fived the sign-language interpreter on his way to the stage) and Ariana DeBose.

And then, as usual, everybody mingled for a while: Bardem with Andrew Garfield over here, Gyllenhaal with Paul Thomas Anderson over there, Steven Spielberg always surrounded by a crowd, del Toro holding court from a seat at the end of the room.

Afterwards, Ciaran Hinds headed for his car after the luncheon that had never been on his bucket list. Asked if he had fun, the 69-year-old Northern Irish actor laughed. “Yeah,” he said. “It was kinda crazy. Kinda crazy.”