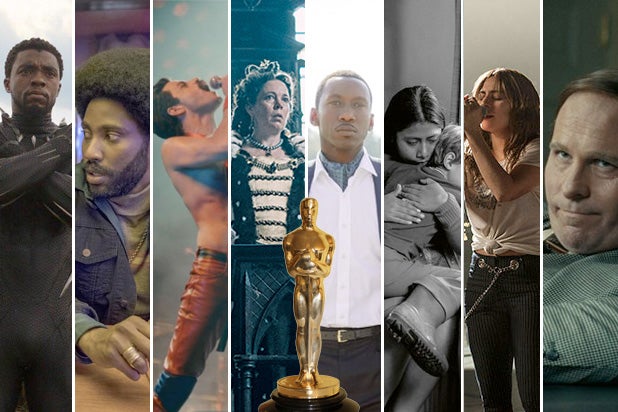 While we were all busy watching the Academy make and then retract baffling decisions about this year’s Academy Awards show, one of the most baffling races in Oscar history bubbled up under our noses.

With a week to go before the envelopes are opened on the stage of the Dolby Theatre, this could well be the tightest, weirdest, most confounding Best Picture competition ever.

Sunday night’s Writers Guild Awards compounded the confusion, giving its top film prizes to one film that isn’t even nominated for a screenwriting Oscar, Bo Burnham’s “Eighth Grade,” and another that is nominated for screenplay but not for picture, “Can You Ever Forgive Me?”

The other three major Hollywood guilds gave their top awards to “Green Book” (the Producers Guild), “Roma” (the Directors Guild) and “Black Panther” (the Screen Actors Guild’s ensemble-cast award), which makes this the first time that the five major guild awards have been won by five different movies, with no film winning more than one.

(Yes, the 2013 awards race found five different films winning, but that’s because the Producers Guild finished in a tie between “12 Years a Slave” and “Gravity,” which also won the DGA.)

Now there will be a sixth — unless the top Oscar goes to “BlacKkKlansman,” “The Favourite,” “A Star Is Born,” “Bohemian Rhapsody” or “Vice,” which haven’t won any of the major guild awards but could actually win Best Picture anyway.

The WGA seemed to almost deliberately confound awards-watchers who think we know how to read the tea leaves. “Roma,” “Green Book” and “Vice,” three formidable Best Picture contenders — the first two arguably the frontrunners — lost to “Eighth Grade,” a Sundance indie that didn’t get a single Oscar nomination. Then “BlacKkKlansman,” “Black Panther” and “A Star Is Born,” three more serious Oscar contenders, lost to “Can You Ever Forgive Me?”

The Writers Guild could have given a touch of momentum to any one of six Best Picture contenders it had recognized with nominations — but instead it gave its awards to two films not even in the running. And that leaves the race in a shambles, without a single movie that can reasonably be expected to win Best Picture, but with a bewildering number of movies that could conceivably turn the trick.

“Roma”? Sure, because since 1948 more than 77 percent of the films to win the DGA Award have gone on to win Best Picture. But not one of those has been a foreign-language film, and only once in the last 38 years has a movie won Best Picture without an Oscar nomination for Film Editing.

“Green Book”? Well, the Producers Guild win has slipped as a sure-fire predictor in recent years, but history says it gives you a two-thirds chance of winning the Oscar. But failing to land a Best Director nomination, as Peter Farrelly did, ought to kill your chances, since only twice since 1932 has the Best Picture winner not also been nominated for directing.

“Black Panther”? Not only has no film won Best Picture with only a SAG ensemble win, but the last film to win without a single Oscar nomination in the directing, writing or acting categories was “Grand Hotel” in 1932 — and “Grand Hotel” is a complete anomaly that didn’t have a single nomination except Best Picture.

Once you get past those three movies, you’re looking at five films that would have to do something that hasn’t been done: win Best Picture without winning a single one of the major guild awards.

And the thing is, one of them could just do it. If “Bohemian Rhapsody” wins it might be most critically derided Best Picture winner of all time, but we’ve been underestimating its appeal for months now. “A Star Is Born” may have lost to almost everything at one time or another (including to “Rhapsody” at the Golden Globes), but it could actually be more of a consensus favorite that won’t be hurt by the Academy’s preferential system of vote-counting the way that more divisive films will be. “BlacKkKlansman” has had a similar tough time getting traction with the guilds, but it’s Oscar-nominated in the right categories and it might not be as polarizing as we think. Ditto for “The Favourite” and “Vice.”

A week ago, I ran down the list of Best Picture contenders and decided that “Roma” and “Green Book” were really the only two that could win. Now, I really think that almost every single nominee has a dimly lit, twisty path to victory, because every nominee definitely has a clear path to defeat.

Here’s the lesson of this weird, ugly Oscar season: This year, precedents and numbers may well be meaningless. This year, something is going to happen that isn’t supposed to happen. This year, nobody knows a damn thing.

The Writers Guild warned us. Don’t even try to make sense of this mess of an Oscar season. Just ride it out, and try not to be too surprised at the end.