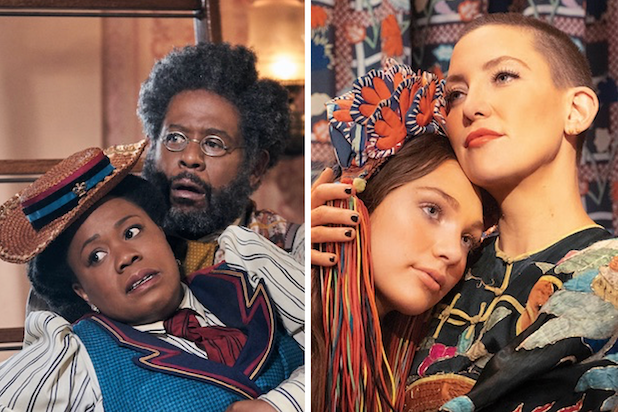 Just when this awards season was starting to look like one that might be almost bereft of surprises, a few nominations and some shortlists have thrown some wild cards into the mix. And that’s added a small note of uncertainty to a year that badly needed one.

Granted, nothing earthshaking came out of last week’s Golden Globes and SAG nominations or this week’s Oscar shortlists in nine different categories. The Best Picture front runners are still the ones we’ve known about since the fall: “The Trial of the Chicago 7” and “Nomadland” and a handful of others.

But in small ways, some weirdness entered the race over the past week and a half. If you’d have asked me on Tuesday morning which films would receive the most notice on the Oscar shortlists — which cover original score, original song, makeup and hairstyling and visual effects, along with international feature, documentary and the three shorts categories — I would have guessed “The Trial of the Chicago 7,” “Mank,” “Tenet” and a few others. I definitely would not have thought that Netflix’s holiday musical “Jingle Jangle: A Christmas Journey” would have matched “Mank” with three shortlist spots — more than either “Chicago 7” or “Tenet.”

And if you told me that the Golden Globes would uncork one of their patented bizarro nominations in the Best Motion Picture – Musical or Comedy category, I would never have guessed that it would be Sia’s “Music,” because I was blissfully unaware of that film’s very existence.

I’m no longer unaware. Now I know enough to realize that the Hollywood Foreign Press Association voters are very fortunate that almost nobody in the United States has even seen “Music.” If people knew that the Globes had given two prime nominations to a bad drama with slapped-on music-video dream sequences that’s so offensive to persons on the autism spectrum that its director has apologized for it, those nominations would have been greeted with scorn on the level of what followed the Globes’ nominations of “Burlesque” and “The Tourist” and its notorious 1981 award to Pia Zadora. Instead, they got away with a brief “What’s that?”

On the other hand, the fact that I was baffled by the appearances of “Jingle Jangle” on the score, song and makeup shortlists isn’t so much that Oscar voters blew it, but that I never bothered to watch a movie that actually deserves attention in those fields. (Hey, I was busy. It’s awards season.)

Now that I’ve watched it, I agree with Alonso Duralde in his Wrap review. “Jingle Jangle” is occasionally overstuffed but imaginative and inventive, borrowing freely from everything from ‘Mary Poppins’ to ‘E.T.’ but also putting a Black cast at the center of a story that’s set up as one that’s being told in place of ‘The Night Before Christmas.'” And the musical numbers are more often than not delightful — and sometimes pretty powerful, as in “Make It Work,” the thunderous gospel-tinged number for which John Legend was shortlisted.

(Let’s face it: You don’t expect a kids’ holiday movie to give you a song that can summon up the legendary crack of John Henry’s hammer.)

Also Read: 'The Trial of the Chicago 7' Lands on Oscars Shortlists for Original Score and Song

I can thank the shortlists for pushing me to watch that film, and I can also thank Oscar voters for showing me that while I had seen 40 of the eligible films in the Best International Feature Film category, I had missed a couple of good ones. Tunisia’s “The Man Who Sold His Skin” and Hong Kong’s “Better Days,” the two entries on the 15-film shortlist that I had yet to see, turned out to be strong and rich pieces of work. The former is a sly riff that simultaneously tackles the plight of refugees and the excesses of the art world, the latter a tangled story of bullying and revenge that threatens to move into sentimental territory but takes too many twists to stay there.

The shortlists contained some other surprises as well, with the humanitarian use of deepfake technology in “Welcome to Chechnya” making it the first documentary to ever make the visual-effects shortlist, and Lolita Ritmanis’ haunting choral soundscapes in “Blizzard of Souls” claiming one spot for a female composer on the otherwise all-male original-score list.

I’m still trying to figure out if I’m going to explore other unexpected contenders, like the VFX entries “Bloodshot” and “Love and Monsters,” or the second version of “Pinocchio” to feature Roberto Benigni, which landed on the makeup list. Perhaps I’ll take a detour into the short films that made those three lists instead, and see what surprises lurk there.