The 10 films shortlisted in the Oscars Best Documentary Short category offer a guided tour of many of the pressing issues of our times: immigration, abortion, civil unrest, famine, racism and sexism — those, plus Rubik’s Cubes and Sophia Loren.

They give Oscar voters in the Documentary Branch the opportunity to go in many different directions as they choose the five finalists in early March. You could assemble a straightforward, issue-oriented slate of nominees from this group, or an odder, more adventurous slate; you could go for wrenching stories, or for playful ones, or even for playful ones that also happen to be wrenching.

Half of the films are directed or co-directed by women — and even though the documentary shorts always have by far the longest running time of the three shorts categories, three of the films run a relatively brief 13 minutes, while only two nudge the limit at 40 minutes.

I’ve watched all 30 of the shortlisted films in the Best Documentary Short, Best Animated Short and Best Live Action Short categories, and will offer my thoughts in a series of pieces on the categories, beginning with the doc shorts. 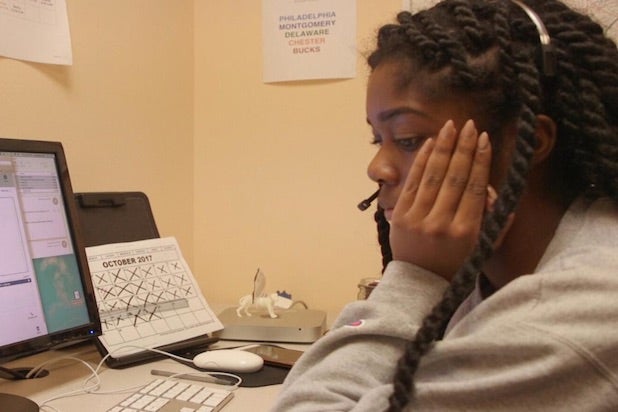 “Abortion Helpline, This Is Lisa” (Topic)

“Abortion Helpline, This Is Lisa”
Directors: Barbara Attie, Janet Goldwater and Mike Attie
Made in the aftermath of the 2016 election as a way to put a focus on threatened reproductive rights, “Abortion Helpline, This Is Lisa” takes place entirely in a Philadelphia center where counselors try to use the center’s meager funds to help poor women who can’t afford to end their pregnancies. The film, which was a finalist in TheWrap’s 2020 ShortList Film Festival, relies on the voices of the callers, many of them desperate, and the counselors, themselves young and grappling with a budget that doesn’t come close to helping everyone who needs it.

At a concise 13 minutes, the film plays like a series of quick, hard-hitting vignettes that spotlight both the threats to reproductive rights and the price of economic injustice. 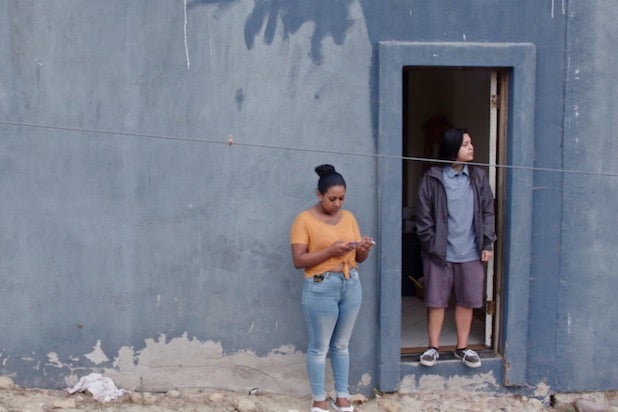 “Call Center Blues”
Director: Geeta Gandbhir
If you think you have the call center blues from being on the receiving end of those sales or survey calls all day, how’d you like to be the one making those calls? This 25-minute film is focused on a call center in Tijuana, Mexico, where a lot of deportees from the United States work because it’s safer than getting involved with the drug cartels. Many had been brought to the U.S. as very young children and were deported after decades there, sent to a country for which they had no affinity or history.

The call center itself eventually becomes secondary to the individual stories, which put a human face on the increased number of deportations during the Trump administration. The film might feel less urgent under an administration that is trying to change border policy, but that’s only a matter of degree. 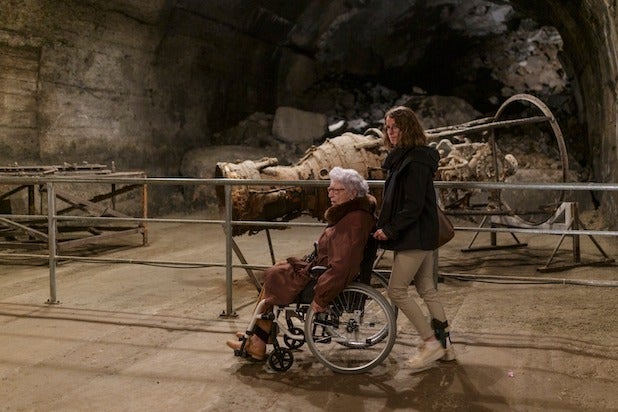 “Colette”
Director: Anthony Giacchino
It’s been a couple of years since this category last had a film about the Holocaust, though that subject has been a constant in the Oscars’ short docs for decades. “Colette” isn’t an outright Holocaust film but it deals with Nazi Germany and World War II, following Colette Marin-Catherine, a 90-year-old woman who is one of the last living members of the WWII French Resistance, as she visits Germany for the first time since the war to see the concentration camp where her brother died. But it’s less of a film about history than one about a stubbornly unsentimental woman facing a horror that she lived through but then spent decades trying to forget.

Catherine is a compelling figure as she visits the Nordhausen concentration camp with a young researcher and declares, “I am known for never crying, so how can I cry in front of strangers?” But both women find themselves unexpectedly overwhelmed, and viewers may feel the same way. 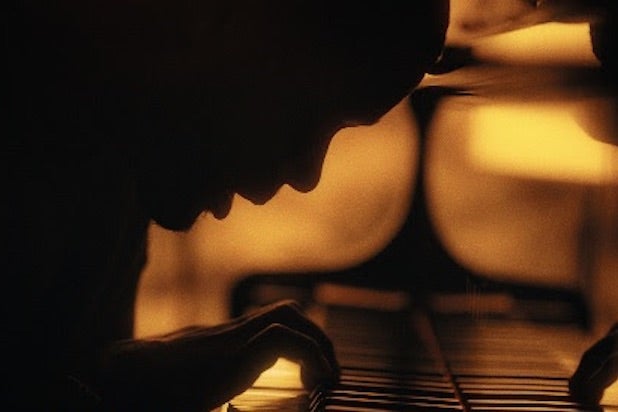 “A Concerto Is a Conversation” (New York Times Op-Docs)

“A Concerto Is a Conversation”
Directors: Ben Proudfoot and Kris Bowers
Another of the shortest films on the shortlist, “A Concerto Is a Conversation” traces two lives in 13 minutes: the life of jazz pianist and film composer Kris Bowers as he prepares for the premiere of his violin concerto, “For a Younger Self,” at L.A.’s Walt Disney Concert Hall, and that of his grandfather, Horace Bowers, who left the Jim Crow South, made his way to Los Angeles and built a successful dry-cleaning business even when banks didn’t want to deal with Black entrepreneurs. The film is structured as a conversation between the two men — though as they speak looking straight into the camera, it’s also a conversation with the viewer about Black life in America, and about the fight to feel that you belong.

“A Concerto” deals with race in America in a small, personal way; it aims to tell one family story, quietly and with brevity, and to let that story stand for a larger, timely issue. Ava DuVernay came on as the film’s executive producer shortly before its Sundance premiere. 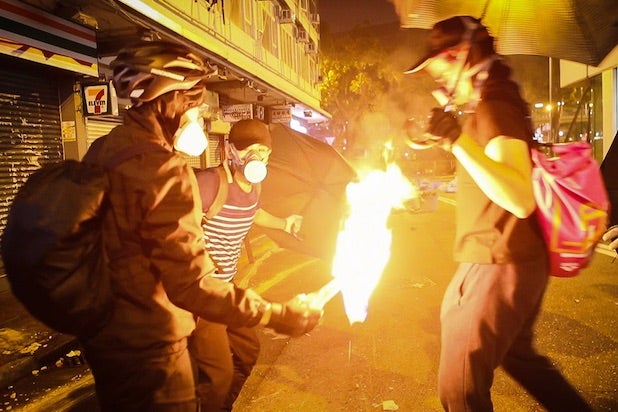 “Do Not Split” (Field of Vision)

“Do Not Split”
Director: Anders Hammer
The closest thing to a cinema vérité doc on the shortlist, Anders Hammer’s film is set on the streets of Hong Kong during 2019 protests over laws that allowed the extradition of people arrested in that city to mainland China, where the conviction rate is 99%. As Chinese police attempted to shut down the protests, particularly around Hong Kong Polytechnic University, the brutality of their techniques “evolved from a political problem to an ethical one,” as one subject in the film says.

“Do Not Split” is an immersive experience that spends most of its time in the midst of the protestors as they try to stand against the police; the story is not always clear, but the panic and the anger are. The film was backed by the Field of Vision documentary unit. 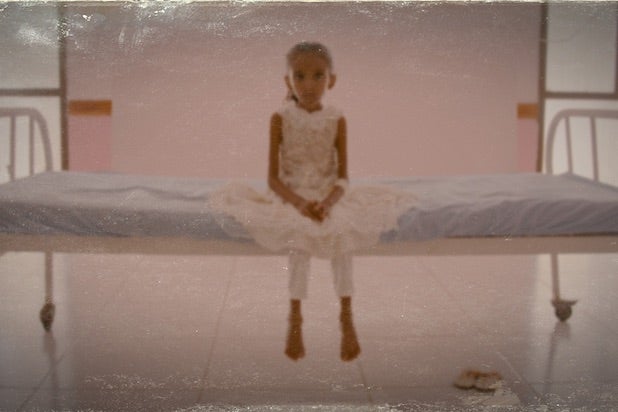 “Hunger Ward”
Director: Skye Fitzgerald
Skye Fitzgerald was nominated in this category two years ago for “Lifeboat,” set in the Mediterranean where rescue boats plucked Libyan refugees off sinking rafts. “Hunger Ward” is, if possible, even more wrenching, because it focuses on children who are victims of the ongoing famine caused by the civil war in Yemen. At 40 minutes, it is a tough sit that tests how much viewers can endure, but it also feels as necessary as it is heartbreaking.

Fitzgerald’s central subjects are the health-care workers who care for malnourished children in clinics across Yemen, but the faces you can’t forget are the children themselves. While a section on the 2014 U.S. drone strike that targeted Al Qaeda but hit a wedding is something of a detour, on the whole the film is a substantial and devastating work that finds small moments of hope in an atmosphere of hopelessness. There was a time when issue-oriented 40-minute docs dominated this category, and if voters are looking for that kind of film this year, “Hunger Ward” could well advance. 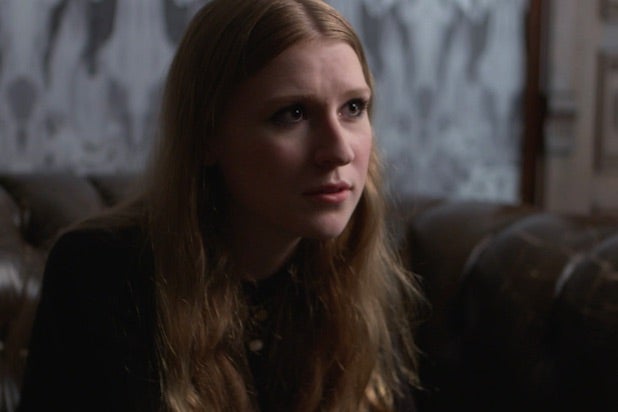 “Hysterical Girl”
Director: Kate Novack
Another of the 13-minute films, “Hysterical Girl” is also the most formally adventurous work on the shortlist, and the one that plays around with the documentary format the most dramatically. Director Kate Novack starts with the fact that in one of Sigmund Freud’s case studies, “Dora,” the father of modern psychiatry may well have taken a teenage girl who’d been sexually molested by an older man and diagnosed her as repressed and hysterical — but she whips that up into a fast-paced, pointed work that lets a fictional Dora tell her side of the story, while hitting the viewer with a barrage of pop-culture references from “Rosemary’s Baby” to Kim Kardashian, and tying Freud’s reaction into the cases of the women who lodged accusations against Clarence Thomas, Roy Moore, Brett Kavanaugh and more, only to be dismissed themselves for fabrication or hysteria.

The filmmaking style alone is bold enough to make “Hysterical Girl” stand out, and the theme has been a constant one in Hollywood since the Harvey Weinstein case upended the town. At one point you could have asked if Novack’s film might not have been a little too adventurous for the Documentary Branch, but the last few years of changes in that rapidly growing (and increasingly female) group suggest otherwise. 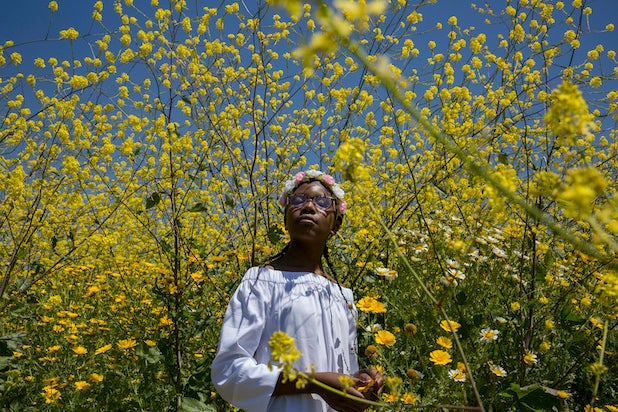 “A Love Song for Latasha” (Netflix)

“A Love Song for Latasha”
Director: Sophia Nahli Allison
The last three entries on the shortlist are all from Netflix, which has been here before: The 2017 win in this category for “The White Helmets” was the first Oscar ever for the streaming giant. “A Love Song for Latasha” is both the angriest of the Netflix entries, and the most lyrical. It tells the story of Latasha Harlins, the teenage girl whose death at the hands of a Korean store owner in 1991 helped plant the seeds for the following year’s violent rebellion in South Central Los Angeles – but it does so not with traditional documentary techniques, but with dream-like recreations of Harlin’s life before she was shot.

The result is more poetry than biography, looking back almost 30 years without getting too concerned with dates or chronology. It’s intriguing that the two shortlisted films that focus on race in America, this one and “A Concerto Is a Conversation,” tell intimate stories and count on them to reverberate in today’s culture. 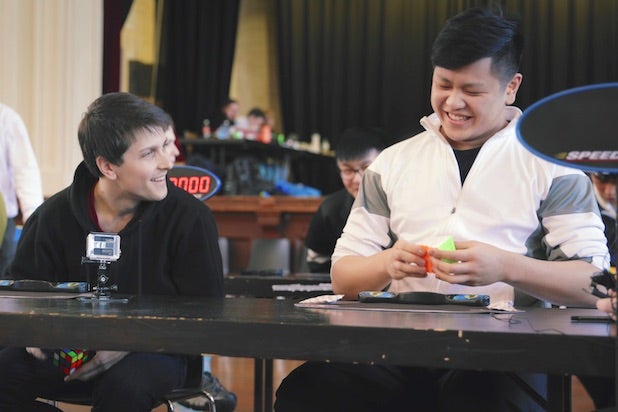 “The Speed Cubers”
Director: Sue Kim
This is the longest of the three Netflix short docs, coming in at two seconds under the 40-minute limit. It adheres to the template of many documentary features set around competitions, from 2002’s “Spellbound” to the recent “Boys State”: In the time leading up to a competition, follow some of the participants and see how far they take you. But in the case of “The Speed Cubers,” the competition was the world championship of “speedcubing,” or solving Rubik’s Cubes at breakneck speed, and there were two titans who towered over everybody else. One, Feliks Zemdegs, is an affable teenager from Australia with a future in finance; the other, Max Park, is an American 18-year-old who developed an obsession with the cube that helps him deal with his autism.

The competition itself unfolds in a blur — this is a contest where if it takes you eight seconds to solve a cube, you’ve blown it — so the film depends on how interesting its subjects are, and how consequential their own struggles seem. Park helps this strange sport feel like a kind of necessary therapy, but the kindness and humanity of Zemdegs is probably what you’ll remember. 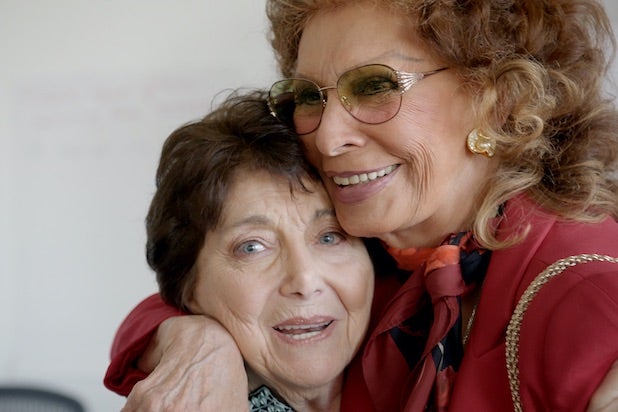 “What Would Sophia Loren Do?” (Netflix)

“What Would Sophia Loren Do?”
Director: Ross Kauffman
Ross Kauffman is the only shortlisted director who’s already won an Oscar in the doc-feature category, which he did in 2005 for “Born Into Brothels.” His short film is a character study, but of two strikingly different characters: Sophia Loren, the Italian actress who became a cinematic icon in the 1960s, and Nancy Kulik, an Italian-American grandmother from New Jersey who considered Loren a role model as she navigated the difficulties in her own life.

In a film about joy and spirit, Loren is always transfixing and Kulik is a hoot, which makes this perhaps the most entertaining of the shortlisted films. But it can also feel like the slightest of them — and with Loren also on Netflix these days in her comeback performance in “The Life Ahead,” it has the potential to feel a bit like a promotional tool, albeit a delightful one.