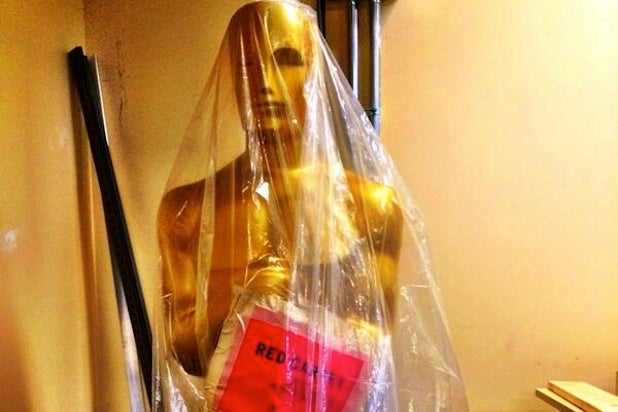 Brad Pitt, Michael B. Jordan, Emma Watson, Bill Murray and Will Smith are among the established stars and up-and-coming talents slated to present at this year’s Academy Awards, the show’s producers said Monday.

In something of a celebrity news dump, the Oscar producers unveiled a list of more than four dozen presenters in one fell swoop. It’s a group that includes current nominees such as “American Hustle’s” Amy Adams, Jennifer Lawrence and Bradley Cooper, and “Dallas Buyers Club’s” Matthew McConaughey.

The list also boasts Hollywood veterans such as Goldie Hawn, Robert De Niro, Sidney Poitier and Harrison Ford and emerging talents such as Zac Efron, Benedict Cumberbatch and Anna Kendrick. There are also a fair number of past winners such as Sally Field (Best Actress for “Norma Rae” and “Places in the Heart”) and Penélope Cruz (Best Supporting Actress for “Vicky Cristina Barcelona”).

Although Zadan and Meron took the usual route in separately announcing the return of last year’s four acting winners — Daniel Day-Lewis, Jennifer Lawrence, Christoph Waltz and Anne Hathaway — they took an unprecedented step in announcing the rest of the presenting crew at once.

Until now, Zadan and Meron have been relatively sparing in announcing what the show will be like. The producers were chosen to return only about six weeks after they oversaw the last show, and they booked Ellen DeGeneres to host in August.

Also read: Oscars Dilemma: Is It OK to Joke About Slavery?

Just before the nominations were announced in January, they said that the theme of this year’s show would be a celebration of movie heroes, and in recent weeks they have revealed that the four nominated songs will be performed on the show by Pharrell Williams, Idina Menzel, U2 and Karen O. Bette Midler and Pink have also been booked, though the producers did not specify what they would be doing.

In addition to last year’s four winners, two of the other names on Monday’s list had previously been revealed.

On Friday, Meron tweeted that Alfred Hitchcock heroine Kim Novak would make a rare appearance on the Oscar show. The last time Novak had anything to do with the Oscars, she took out an ad in January 2012 saying that she felt raped when she watched “The Artist” and heard part of Bernard Hermann’s “Vertigo” score during a climactic sequence. The film went on to win Best Picture.

And in a conversation with Entertainment Weekly, the producers said that “Amazing Spider-Man” star Andrew Garfield would be part of an emotional moment in the show.

In that same conversation, Zadan and Meron said that the heroes theme would be separated into different segments devoted to different kinds of heroes: one on animated heroes, one on true-life heroes depicted onscreen, one on characters like Harry Potter, Indiana Jones and the Ghostbusters, one on filmmakers who “don’t play it safe” in tackling difficult subject matter.

Meron has also been tweeting photos taken during the setup process at the Dolby Theatre, including the shot at top.

The presenters, including several past Oscar winners and nominees, will be: