Both movies come from children’s books from well-known authors. Both are made by directors known for the grown-up pleasures of their work. And both movies have turned out to be immensely polarizing as they edge into the awards picture.

“Where the Wild Things Are” had a solid opening weekend and drew some of the most rapturous reviews of the year from top-tier critics, including the New York Times and the two new hosts of the credibility-enhanced “At the Movies.” But it’s also found quite a few viewers and critics who didn’t respond to the pacing and didn’t see the point in director Spike Jonze turning Maurice Sendak’s classic story into an expensive meditation on loss and sadness.

“The Fantastic Mr. Fox,” on the other hand, saw its premiere week begin with a news story in which a couple of crew members lambasted director Wes Anderson in surprisingly strong terms. When that controversy calmed down, the movie left critics unanimous on one thing – Anderson made the movie for an audience of one: himself – but strongly divided on whether that was good or bad.

The latest installment of the Odds’ verdicts covers these two films. One, I thought, was mostly lackluster, the other mostly wonderful. I suspect that neither is likely to be an Oscar heavyweight, but with a little momentum both could figure in the race. 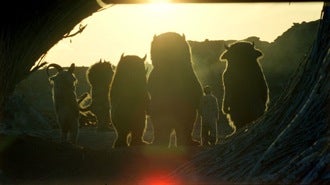 “Where the Wild Things Are”

Verdict: I went into the theater wanting to love it. I did love much of it. If it transported me less than I’d hoped – if parts bogged down, if I could have done with fewer dirt clods and less of the Wild Things’ endless, and endlessly similar, arguments – the sadness and melancholy at the heart of the movie gave it a lovely glow. The character of Carol (masterfully voiced by James Gandolfini and enacted by Vincent Crowley in a suit from Jim Henson’s Creature Shop, with a face animated by special effects technicians) is an indelible creation: funny and touching and, in the end, heart-wrenching.

Years back, one of my biggest problems with Ron Howard’s noisy version of “How the Grinch Stole Christmas” was that he tried to turn it into “Why the Grinch Stole Christmas,” and that why just cluttered the movie with silly psychoanalysis. In a way, Jonze takes a similar tack and gives us “Why the Wild Things Are,” but he manages to turn that why (loss, abandonment, fear) into the moving, beating heart of the picture.

Oscar chances: At the moment I’d say it’s a best-pic longshot that could be a player in art direction and effects categories; if it continues a strong run at the boxoffice, the higher profile and prestige reviews could boost those chances. With most of the actors obscured by costumes, though, it may face the kind of resistance from the actors’ branch that animated films often come up against. It ends with a lovely song that’ll be hurt by its placement over the final credits; the songs that are heard during the film itself tend to be snippets too short to register with the music branch.

One troublesome sign for its Oscar hopes is that I hear its Academy members-and-families screening at the Samuel Goldwyn Theater on Sunday morning was only about 40 percent full, and that the most enthusiastic reactions came from the youngest kids in the audience. Otherwise, the crowd was reportedly restless, and the reaction muted. But the movie apparently played better at a subsequent afternoon screening, which was open to members and a single guest each, rather than to entire families. 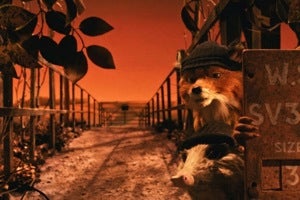 Verdict: The film is not so much a blend of Wes Anderson and Roald Dahl as it is Dahl’s plot (and a few of his words) thoroughly steeped in Anderson’s ethos; with the fastidious tailoring, the British invasion songs on the soundtrack and the introduction of father issues and sibling rivalry to Dahl’s narrative, it’s the director’s sensibility you come away with, not the writer’s. Working from a thin book – nowhere near as thin as “Wild Things,” but thin nonetheless – Anderson added marital problems, financial woes, and an entirely new, action-packed third act to Dahl’s story about a bunch of forest creatures outsmarting humans.

The film’s look is stylish, beautiful and defiantly low-tech, its stop-motion style gloriously retro. But Anderson’s usual tone – playful, arch, self-consciously clever – makes an awkward fit for a movie about a bunch of forest creatures outsmarting humans; two-thirds of the way through the movie, I found myself thinking back to how good Nick Park’s charming, straightforward “Chicken Run” was. The voice cast, meanwhile, is full of stars who sound like stars, but that’s not always a good thing: as Mr. Fox, George Clooney trots out his “Ocean’s Eleven,” red-carpet, Mr. Slick persona so fully that his presence almost pulls you out of the movie.

Oscar chances: Clearly, its best bet is in the animated feature category, but it’ll likely be a longshot unless the category expands from three to five nominees. Animated films rarely figure in other categories outside of sound and music; I’d say “Mr. Fox” isn’t showy enough to compete in the former race, though it has a shot in the latter. At one point, an animated version of Jarvis Cocker performs an original song onscreen, which ought to give the folky ditty a greater impact in the best-song competition; the fact that another character immediately describes it as “a bad song” may not help, though.