When I asked a handful of Academy voters whether the expanded Best Picture slate would change the way they vote, most of their responses were only a sentence or two long.

But one member took more time and summed up the state of the industry as he sees it – and he’s amenable to me sharing his email, which seemed to me to deserve it. 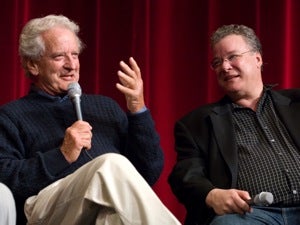 So I’m going to turn the floor over to veteran actor (“All the President’s Men,” “Reds” and a whole lot of other things) and longtime Academy member Nicolas Coster. (That’s him on the left, with sound mixer Tom Fleischman at a 2007 Academy screening of “Reds.” Photo: AMPAS)

“Will the new rules affect the way I consider which are the best of the lot?

"I think that because there are more pictures to consider it will automatically include the possibility of more variety.

"However, I have never excluded a picture because it it is a tentpole, mass-appeal film. “Titanic” comes to mind. ‘Gone With the Wind’ never leaves the mind.

"Conversely, I never included an indie art film because it was an art film … I included it because I thought that in that year it was an exceptional film … among other good films.

"There is lots of muck on the low-budget scale that I would not even watch for free on TV. Similarly, there is a lot of multi-million dollar crap that I turn off on TV or leave the theatre in the middle of, when my yawns get to loud to stifle.

"No, in thinking it through, I believe what will happen is that by the sheer weight of numbers that more variety will creep into the mix of nominees. There will still be screams that we are a bunch of elitists when there simply are not any big-budget pics that are that good. There will be times when the ten best films are not blockbusters.

"Wondrously, there might be times when perhaps the studios will try to have a picture of action and adventure be of quality as well. It has happened in the past. Would it not be grand if like the best of the ’40s, ’50s and the rest, the studios in their wisdom realized that people really do like to see a good picture as well as a C-4 smelling, 1,400-round-a-minute, stunt-filled, fire-bombing car-chasin’ epic with a nothing else to set it apart from the rest?

"I believe that the members of the Academy still treasure the artist in film. That is what our honors are all about. It does not have to be an Art film, just a good one.”