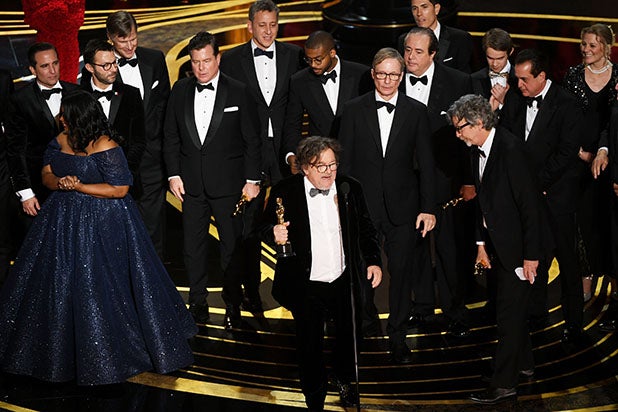 “Green Book” producers and director Peter Farrelly thanked a great number of people during their Best Picture acceptance speech on Sunday, but the men portrayed in the biopic itself went unacknowledged.

Jim Burke, Charles B. Wessler and Peter Farrelly took the mic when their film collected the night’s biggest award at Sunday’s Oscars ceremony and together ran down a list of names that included Octavia Spencer, Steven Spielberg and even the late Carrie Fisher, but viewers were quick to notice no one mentioned Don Shirley, the man Mahershala Ali won an Oscar for portraying in the film.

Farrelly opened his speech by saying the film “doesn’t start without Viggo [Mortensen],” andthere would have been no film without the actor’s involvement. Mortensen co-starred alongside Ali as Tony “Lip” Vallelonga, the driver and bodyguard for Shirley during his 1962 concert tour.

“The whole story is about love,” Farrelly said. “It’s about loving each other despite our differences.”

Shirley, an acclaimed jazz and classical pianist, died in 2013, well before the movie’s release, but his surviving family members have since spoken out against the film.

In an interview late last year surrounding the film’s release, Edwin Shirley III, nephew of the late jazz legend, called watching “Green Book” a “jarring” experience, while Don’s brother, Dr. Maurice Shirley, called it a “symphony of lies.” They said that no one in Shirley’s family was consulted during development of the film.

Ali has since been reached out to the family and “apologized” for their lack of involvement, according to Edwin. And the actor himself did thank the Don Shirley when he collected his own supporting actor award earlier in the night.

“I want to thank Dr. Shirley for just trying to capture his essence,” Ali said at the top of his speech. “Trying to capture Dr. Shirley’s essence pushed me to my ends, which is a reflection of the person he was and the life that he lived. And I thank him.”

They mentioned Carrie Fisher but NOT DON SHIRLEY

Not one of them white men even mentioned Dr. Don Shirley when accepting the award for Green Book. #Oscars. pic.twitter.com/lVMXf8Kskx

NO ONE SAID DON SHIRLEY’S NAME

“It all started with Viggo,” but not Don Shirley, who was apparently a prop sourced by the production designer.