As one of the two PricewaterhouseCoopers partners who supervise the Oscar voting, Rick Rosas is one of the guys who knows all the secrets: the margin of victory, the second-place finishers, all the juicy stuff the Academy doesn’t want us to hear about.

He and his Oscar cohort Brad Oltmanns will never tell, of course – but Rosas did agree to answer a few questions about expanding the best-picture slate and extending the preferential system of tabulating ballots into the final vote. Of course, being part of a company whose reputation is based on their ability to keep secrets, he wanted to make sure the questions didn’t get too speculative, or too intrusive into the process that remains one of Hollywood’s enduring mysteries. (Below, that’s Rosas, left, and Oltmanns arriving at the 81st Oscar show with the envelopes.  Photo: Darren Decker/AMPAS) 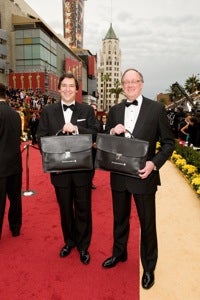 It’s September. Do the Oscars occupy any of your time these days?

A little bit. Not a lot, though. This year I’ve probably spent more than in years prior, just because of the notable changes in the best picture category.

Did the Academy talk to you about those changes before they made them?

What did they want to know? If the changes made sense to you? If you had any qualms?

Well, our role is to tabulate. The Academy reached their own decision on the 10 nominees, and even on the process of tabulating the final vote. When they brought us in, they wanted to validate that it was doable and would yield the kind of valid, consistent result that they were hoping to achieve. And they wanted us to think about the practical considerations of how to go about doing it. They didn’t really have any concerns about it, but they wondered if we had any concerns that they should have thought of. We didn’t, frankly.

In one way, it seems as if it would be easier for you to come up with the best-picture nominees, because you’re narrowing the field only to 10 instead of five. On the other hand, you might end up with more pictures in play, which could take longer. Do you foresee much difference in the time it’ll take?

Especially the first year, I would expect it to take us a little more time. Just because, as you rightly mentioned, we have a ballot with 10 spots on it instead of five. And that theoretically could open up some dynamics that could take a little bit of extra time to work their way through. But as you also rightly referenced, that’s counterbalanced by the fact that at the end of the day we’re eliminating down to 10 versus five, so theoretically you could end up with fewer rounds. They should counterbalance each other. But we don’t really know, because we haven’t done it yet.

When you say some dynamics could take extra time, I think of the surplus rule. It stipulates that if a movie has 20 percent more votes than it needs to secure a nomination, all of the ballots for that movie are redistributed, and the next choice on those ballot counts not as a full vote, but as a percentage of a vote.

I’m happy to chat on surplus, but it’s one of those topics that gets so esoteric. And it leads to all types of speculative questions. I don’t want to deal with the speculative questions I always get about this system favoring certain types of movies above others, because I have no real opinion on that.

Fair enough. But with 10 nominees, you have a much lower threshold to secure a nomination. With five slots, you need about 1,000 votes to guarantee a best-picture nomination, but with 10 you only need about 550. It seems to me that the chance of a few films going 20% over that lower threshold that has increased dramatically. Which could complicate the count, because it means that instead of casting a vote for one movie, some members will be casting fractions of that vote for a couple of different movies.

Correct. Now, to a degree that’s a speculative question, because none of us know how the votes will be distributed between all the films. But the first part of your question is valid in that indeed, the quota will be a lower number. So yeah, it’s quicker for a particular movie to clear the quota line, and get to a suplus. Will that come to pass? No idea. Some years it may, and some years it won’t. But indeed, that was a consideration for us. We have thought about the fact that we may have more surpluses.

Is extending preferential voting to the final best-picture tally necessary to get a true consensus?

Well, at the end of the day that’s a philosophical decision. I think the Academy was mindful of the fact that they have a fairly broad population of voters, and in this one overarching category they wanted to ensure that the film that ultimately wins has the broadest, deepest support from the overall membership. And with 10 nominations, clearly you can run into some interesting scenarios, where a film could win with a percentage that might be lower than you would want. So they properly reached the conclusion that they should have what is effectively an instant runoff election. Now, what you’re looking for is 50 percent of the vote plus one. And it could be over on the very first pass.

I would think that it’s exceptionally rare for a film to get that many votes on the first pass.

I couldn’t say that. I couldn’t, and I wouldn’t.

Bruce Davis said that the best-picture part of the final ballot will probably be detachable, and that you’ll have a separate team counting those votes.

The first part of that, the detachable portion, is accurate. But we are not anticipating using a separate team on best picture. We’ve had discussions about that internally, as you can image, and we are going to adopt certain procedures that will utilize, almost exclusively, Brad and I.

That was going to be my next question – because if you’re making stacks of ballots, the way the preferential count is done, you can’t accurately predict when you’re going to find a winner. And the two of you are supposed to be the only ones who know those winners.

Yeah. You could sort this, and on the very first crack you could have the winner. Unlike the other 23 categories, that doesn’t lend itself to separating, doing a sampling, allocating ballots between different people who only get a portion of them, and then Brad and I doing the final tally. The first count, the first time you do it, you might have a winner. So from a confidentiality standpoint, it’s a little different.  Brad and I will have a very hands-on role in this category.

Recently, somebody online suggested turning the Oscars into an “American Idol”-style countdown: revealing the 10th place finisher at the beginning of the show, and then eliminating another nominee every few minutes until you’re left with the best-picture winner. That seems like something the Academy would never go for – but if they came to you and asked you to do that, would you have any philosophical objections?

It’s their show. It’s their show. But you’re right—I don’t anticipate them asking me that. I can’t think of an objection I can cite from a philosophical standpoint, although I’m sure there are some. But it’s not anything I’m expecting, because it runs counter to the whole concept of announcing one winner, and never disclosing the results beyond that.

Why am I not surprised that you wouldn’t answer the question?

Actually, I can answer it: I’ve seen a lot of good movies lately. I can absolutely say that there’s a lot of good stuff out there, and I’ve seen things this summer that I greatly enjoyed. [laughs] But I can’t answer the follow-up question that you’re gonna ask me.

You mean this follow-up question: Which good movies are you talking about, Rick?

Then I shut up. Then I get quiet.