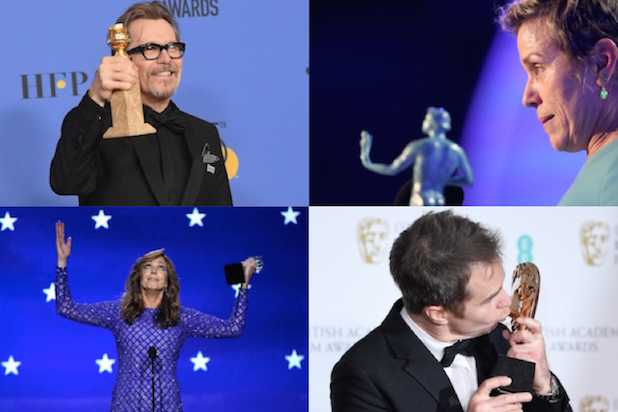 Hey, Daniel Day-Lewis: It’s an honor just to be nominated. Remember that when you go to the Oscars on March 4.

You too, Meryl Streep. In fact, there are 16 estimable folks who are going to lose at the Oscars this year. We know it, you know it, everybody knows it. Even your agents and publicists know it, no matter what they’re telling you.

“Are we going to have any upsets at the Oscars this year?” moaned one voter to me this week — and the answer is that we will probably have a few, but almost definitely not among the acting awards, which are going to be won by Gary Oldman for “Darkest Hour,” Frances McDormand and Sam Rockwell for “Three Billboards Outside Ebbing, Missouri” and Allison Janney for “I, Tonya.”

This is one of the most wide-open Best Picture races in Oscar history, but it might be the least suspenseful set of acting categories ever. That’s because for the first time, the same quartet of actors have won all four of the main precursor acting awards: the Screen Actors Guild Award, the Golden Globe, the Critics’ Choice Award and the British Academy Film Award (BAFTA).

We’ve had two years where three of the four categories had nominees come into the Oscars after a sweep of those awards — J.K. Simmons, Julianne Moore and Patricia Arquette in 2015; Forest Whitaker, Helen Mirren and Jennifer Hudson in 2007 — but never a year in which all four had shown up at the Oscars carrying brooms.

Which, if history is any guide, means we’ve never had a year with so little suspense in the Oscar acting categories.

Since the mid-1990s, when the SAG Awards and the Critics’ Choice Awards were launched, 28 actors have swept BAFTA, SAG, Globes and Critics’ Choice. (The latest were Viola Davis for “Fences” last year and Leonardo DiCaprio for “The Revenant” and Brie Larson for “Room” the year before.)

All but one of those 28 have gone on to win the Oscar. The exception: Russell Crowe, who swept the table in 2002 for “A Beautiful Mind” but then lost the Oscar to Denzel Washington in “Training Day.”

How could he have lost? Well, he’d won Best Actor the previous year for “Gladiator” — and even though the Academy knew he was better in “A Beautiful Mind,” he just wasn’t well-liked enough that they wanted to give him back-to-back Best Actor awards. (They reserve that for Tom Hanks and Spencer Tracy.)

And by the way, most Oscar watchers thought Crowe only won for “Gladiator” because the Academy felt it owed him for the previous year, when he’d lost for “The Insider,” in which he was also better than in “Gladiator.”

There is no such labyrinthine reasoning going on this year with any of the rivals to Oldman, McDormand, Rockwell and Janney.

There’s no sentimental surge to give Daniel Day-Lewis a shiny parting gift for what he has said is his last performance. There’s no need to give Meryl Streep another statuette; after all, she’ll be back. And voters no doubt figure they’ll have lots more chances to recognize Saoirse Ronan and Timothée Chalamet, who are in their early 20s and show every sign of remaining great for a long time.

If there’s an underdog with any real chance of staging an upset, it might conceivably be Laurie Metcalf, whose mom in “Lady Bird” is domineering but significantly less despicable than Janney’s mom in “I, Tonya.” But that hasn’t hurt Janney or helped Metcalf yet, and it’s a little late to expect it to do so now.

So if you’re watching at home and wondering when to take a bathroom break or make a sandwich during this year’s Oscars, can we suggest something?

Stick around for Best Documentary Short and Best Sound Editing, and take your break during the acting categories.

Unless you want to see Meryl and Daniel and Saoirse and Timothée and the rest make those loser faces. They should be pretty good at them by now, because they’ve had a lot of practice.