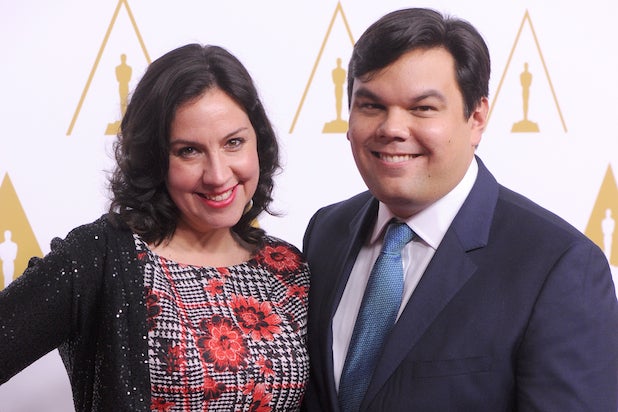 With his Best Original Song Oscar win for “Let It Go,” Robert Lopez is now the youngest person to have won a competitive Emmy, Grammy, Oscar and Tony — and he’s the fastest to get there.

At the age of 39, Lopez, who co-wrote the Oscar-winning original song from “Frozen” with his wife, Kristen Anderson, joins a very small group of only 12 people to have one the major awards superfecta, known as the “EGOT,” a term coined by first winner Richard Rodgers.

The latest winner started on the EGOT journey in 2004 Tony for Best Original Score for raunchy puppet comedy “Avenue Q.” Lopez next won the Daytime Emmy for Best Music Direction and Composition for “The Wonder Pets” in 2008

In just the past two years, Lopez won the 2012 Grammy for Best Musical Theater Album for “The Book of Mormon,” which he developed with “South Park” creators Trey Parker and Matt Stone, and tonight’s win rounds out the EGOT.

The 10-year span from first to last win is the fastest anyone has achieved the honor.

Here are the 11 other winners:

Also read: Oscars Backstage: Lupita Nyong’o Says ‘You Have to Allow for the Impossible to be Possible’