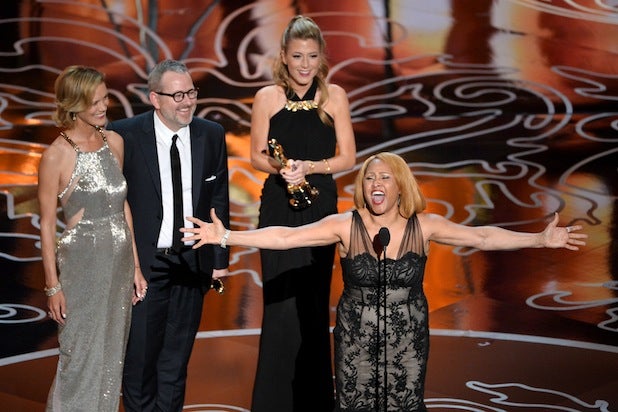 Near the end of a panel exploring the Oscar success of the documentary “20 Feet From Stardom” at the Academy’s Vine offices this week, an audience member asked the panelists a pertinent question.

Freely paraphrasing, her query was essentially, “I’ve made a serious issue documentary, not an entertaining music doc. What would I have to do to win?”

She certainly isn’t the only one to ask that question recently. Academy documentary voters have a love affair with feel-good films, giving the feature-doc Oscar to the friendliest and most entertaining movie for the last three years running.

And with this year’s documentary race about to enter its key phase — paperwork for all entries was due at the Academy last week — some competitors have to wonder if “it’s an honor just to be nominated” will have to remain the mantra for makers of the tough, issue-oriented films that have long been considered the real heart of the field.

Earlier this year, the Oscar winner was “20 Feet,” Morgan Neville’s chronicle of the lives and careers of a number of backup singers. The year before, “Searching for Sugar Man,” Malik Bendjelloul‘s look at the unlikely resurrection of the long-lost singer-songwriter Rodriguez.  The year before that, “Undefeated,” Dan Lindsay’s and T.J. Martin’s inspirational film about high school football coach in Tennessee.

Over those same three years, the International Documentary Association’s IDA Awards gave top-doc honors to the Egyptian-revolution film “The Square,” to “Sugar Man” and to Patricio Guzman’s  “Nostalgia for the Light,” an evocative South American film that somehow combines space exploration and mass killings during the Pinochet dictatorship in Chile.

Another major non-fiction award, the Cinema Eye Honors, opted for two Oscar nominees, the surreal and horrifying “The Act of Killing” and the West Bank chronicle “5 Broken Cameras,” as well as the Academy’s biggest 2012 snub, Steve James‘ inner-city story “The Interrupters.”

You could argue that the IDA and Cinema Eye choices are more representative of the range and vitality of current non-fiction filmmaking, and certainly more hard-hitting, than the Academy picks. And certainly, there was some grumbling in the doc community, and within the Academy’s Documentary Branch, after “20 Feet From Stardom” made it back-to-back wins for music films over tougher issue films.

“I heard, ‘Oh, it’s so soft’ so often that you would have thought nobody in the doc branch voted for ’20 Feet,'” said one doc insider who requested anonymity. “But it wouldn’t have advanced to the shortlist if the branch hadn’t voted for it.”

Thom Powers, a documentary programmer who oversees the doc bookings at the Toronto International Film Festival, DOC NYC and other key festivals, told TheWrap that he agrees that the Academy voters go for softer movies — but he doesn’t think there’s any need for them to apologize for their taste.

“It does appear to be a trend, but I don’t really see a problem with the choices of awards,” Powers said. “There are so many good films that get nominated that any one of them would be deserving, and I think that the fact that the Academy has gone with three feel-good films is not that far out of line with a lot of the choices they make in other categories.”

Besides, he added, why wouldn’t you expect the Academy to honor films like “20 Feet” and “Sugar Man?”

“Frankly, it would be boring if Cinema Eye and the IDA and the Spirit Awards and the Gotham Awards were all recognizing the same films as the Academy.”

Filmmaker A.J. Schnack, who helped found Cinema Eye with Powers and others, agreed. “I generally think it’s healthy for our community that there’s been so little overlap between Cinema Eye, the IDA Awards and the Oscars the past few years,” he wrote in an email to TheWrap.

“Even if I were to overly stereotype the three awards and say that the IDA highlights films that successfully connect with a social issue, Cinema Eye highlights artistically daring films and the Oscars go to crowd pleasers, I don’t think that’s necessarily a bad thing.”

The panel about “20 Feet From Stardom” was part of Getting Real, a three-day conference sponsored by the IDA in collaboration with the Academy, and designed to give filmmakers a look inside the world of making and marketing non-fiction film. Titled “From Sundance to Oscar: A ’20 Feet From Stardom’ Case Study,” it traced how the film team built awareness throughout the year, taking advantage of the fact that the singers who were the subjects of the film proved to be great assets at film festivals, parties and events where they performed.

It went mostly unremarked-upon that current Academy rules, which place the shortlist vote in the hands of the entire doc branch instead of small panels, and open final voting to everyone in the Academy, seemingly favor crowd-pleasing films, and ones that can raise awareness through parties, receptions and well-funded campaigns.

(“Sugar Man” was a Sony Pictures Classics release; “20 Feet” and “Undefeated,” the last film to win under the previous system, were distributed by RADiUS, a division of the Weinstein Company.)

And while moderator Sacha Gervasi could have been forgiven for thinking that his acclaimed 2009 music doc, “Anvil! The Story of Anvil,” might have fared better under the new rules and might in fact have paved the way for “Sugar Man” and “20 Feet,” he and the panelists largely stayed away from analyzing the Academy’s changing tastes, and what they mean for the doc world.

Submarine Entertainment’s Josh Braun, the film’s sales agent, alluded to Academy preferences when he admitted that for him, the biggest hurdle was getting the film onto the 15-film shortlist and then onto the slate of five nominees.

“I thought, if it gets nominated, it can win,” he said. “But it may not get nominated.”

In fact, said one Oscar-nominated director who asked not to be identified, the new rules make it easier for sunnier movies to land nominations, as well as precious spots on the pre-nomination 15-film shortlist. “To get nominated you have to have a lot of doc branch members vote for you, so having fun events to lure people out is key,” said the director. “Feel-good music [movies] work.”

Added a doc strategist, “It’s a no-brainer that the general Academy leans to the softer stuff. So if you’re a harder-hitting film and you’ve been nominated with one of those other films, you have to understand that you are somewhat doomed.”