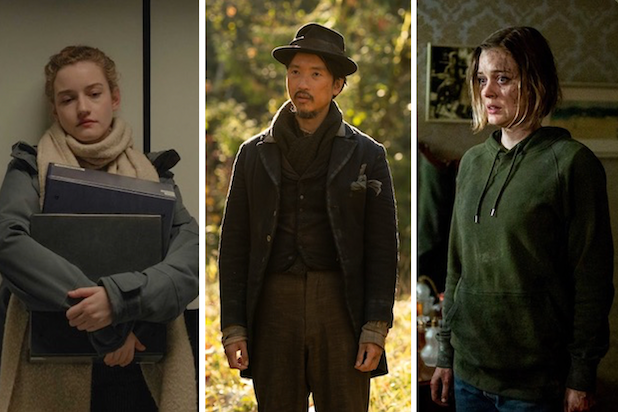 In a normal year, you’d only expect one, maybe two of the nominees in the Gotham Awards’ Best Feature category to also end up nominated for the Best Picture Oscar, and two or three of the acting nominees to repeat with the Academy. But 2020 is anything but a normal year, so the feeling was that things might be different this year when the Independent Filmmaker Project announced the Gotham nominees on Thursday.

After all, the Academy has been forced in a more indie direction for this year’s Oscars, simply because so many mainstream, commercially-minded movies had fled from the release schedule to await the time when theaters could reopen.

But when the Gotham nominations came out, guess what? Of the five films nominated in the top category, there’s one, Chloé Zhao’s “Nomadland,” that’s likely to land a Best Picture nod. And of the 15 people nominated in the Gothams’ three acting categories, only two or three are probable Oscar nominees: Frances McDormand in “Nomadland,” Chadwick Boseman in “Ma Rainey’s Black Bottom” and Kingsley Ben-Adir in “One Night in Miami” are the likeliest, followed by Riz Ahmed in “Sound of Metal.”

Which is to say that it’s business as usual, even in a very unusual year.

Certainly, Oscar voters won’t have the normal array of major-studio contenders, or even specialty-studio-attached-to-a-major-studio contenders, available to them this year. From the major studios, there’s maybe Warner Bros.’ “Tenet,” Disney/Pixar’s “Soul” and Universal’s “The Invisible Man” from the movies that have been released in 2020, plus Universal’s “News of the World,” Warner’s “Judas and the Black Messiah” and “The Little Things” and Paramount’s “The United States vs. Billie Holiday” still to come, if they don’t get delayed; from the major-affiliated specialty studios, there’s Searchlight’s “Nomadland,” Sony Classics’ “The Father” and “French Exit” and Focus’ “Promising Young Woman.”

(If you count Netflix, which has “The Trial of the Chicago 7,” “The Midnight Sky,” “Da 5 Bloods,” “Ma Rainey’s Black Bottom” and others, the math changes.)

But if that paucity of mainstream movies forces Oscar voters toward more indie films, the Academy’s definition of indie is likely to be very different from the Gothams’ definition of indie. The former may focus on “Nomadland” and “Chicago 7” and “The Father” and “Minari” and “French Exit,” while the latter does include “Nomadland,” but also goes for “First Cow,” “The Assistant,” “Never Rarely Sometimes Always” and “Relic” in the top category, and includes “Swallow,” “Miss Juneteenth,” “The Vast of Night,” “Saint Frances” and others further down the ballot.

Now, you could argue that “The Assistant,” “First Cow” and “Never Rarely Sometimes Always” deserve to be in the running for Best Picture, and you’d be right. But good as they are, they’re decided long shots, even if all three are currently available in the Academy Screening Room, just waiting for members to check them out.

(The fifth nominee, “Relic,” is not in the screening room — but then, the Academy has never shown the slightest inclination toward indie horror, even smart and stylish indie horror, so it might be prudent for IFC Midnight not to pay to put it in front of members.)

The Gotham juries, which are made up mostly of film critics and which differ from one category to the next, could have gone in a direction that would have been more predictive of the Oscars. They could have nominated Aaron Sorkin’s “The Trial of the Chicago 7,” and its large group of supporting actor contenders; they could have recognized Regina King’s “One Night in Miami” with more than just a single acting nomination.

But they found an indie track that feels like it’ll be dramatically different from the way the Academy will go, even this year.

There’s Oscar Indie, and there’s Indie Indie. Thursday was a showcase for Indie Indie, or at least for the Gothams’ distinctive and often peculiar version of it. The Spirit Awards will offer a different version of it with their nominations in January, and then the Oscars will wait until March to chime in. But when they do, make no mistake: Oscar Indie will feel like a different thing altogether.