“There’s definitely some disgruntled songwriters, and more disappointment,” says Oscar show co-producer Bill Mechanic of the decision not to include performances of the nominated songs on this year’s Academy Awards, as reported Tuesday on TheWrap.

Mechanic addressed the move to TheWrap at Wednesday morning’s unveiling of the Oscar set.

“Anytime you break with convention, you know you’re not going to please everybody,” he said of the decision to showcase the songs through film clips rather than onstage performances.

“But I’ve gone through the governors, and I’ve said this to every agent and every person who wants to talk to me: We are literally treating this category like it’s as important as Best Actor.” 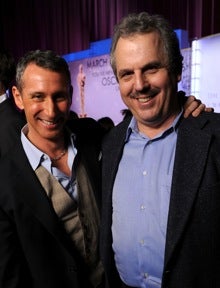 The move has apparently been in the talking stages since the morning nominations were announced; one insider admitted that had Paul McCartney and U2 been nominated for their songs from “Everybody’s Fine” and “Brothers,” respectively, we wouldn’t be seeing this change.

“It’s an odd year,’ says Mechanic (left, with co-producer Adam Shankman). “Not only are all the songs ballads, but three of them are performances within the movie.” (The exceptions are the two Randy Newman songs from “The Princess and the Frog,” which are performed by animated characters.)

“In the Best Actor category, you show clips of the actor – you don’t have somebody come onstage and play the actor. So in this case, if somebody’s performing the song in the movie, it made sense to excise it straight from the movie.”

A rough cut already exists, I hear, of the film package that will be used to showcase all five song nominees with clips from “Princess,” “Nine,” “Paris 36” and “Crazy Heart.”

It will apparently play like most of the nomination clip packages do, and it will not be accompanied by any of co-producer and choreographer Adam Shankman’s 60-odd dancers.

Those dancers will be showcased, other insiders tell me, in two separate numbers. The first, which will come at the beginning of the show, will feature the largest group of dancers; the second, later in the evening, was described to me as being unlike any dance number you’ve seen on the Oscars before.

(A number set to the nominated scores has long been rumored – but since that’s the kind of thing that has been done many times over the years, I assume that Shankman’s taking a different approach.)

Something else you won’t see on the show, Mechanic promises, are those long, dramatic walks across the stage. While they’ve often been used in the past to give actresses especially glamorous entrances, the walks simply take too much time, the producer says. 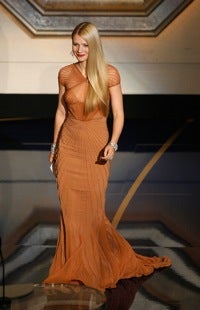 “You won’t see one long walk the entire evening,” he says. “I want to cut down on anything that isn’t necessary. There was a year when they brought Gwyneth Paltrow (right) from backstage with a camera behind her and another in front of her, and it was a 45-second walk to the podium.

“I mean, it’s not bad eye candy, but if you can get her to the stage in 10 seconds or less, that’s saving a lot of time.”

Less controllable, he concedes, are the walks from the audience to the stage, particularly by winners who aren’t movie stars and aren’t seated up front.

“We’re still dealing with the acceptors, and how do we cut that down,” he says. “We thought we had a good solution, but there are complexities about who’s seated where, so we can’t do it as efficiently as we want.”

As for the goal of a show coming in at or around three hours, the first-time producer admits that it might not happen. He says his fate is in the hands of the evening’s winners, whom he and Shankman addressed at Monday’s nominees luncheon, pleading with them to say something about what the award means and save the laundry list of thank-yous for the backstage “Thank-You Cam.”

“I’m confident that we’ll get the show to a reasonable length, but it probably won’t be as short as I want,” he concedes. “A lot of it now depends on how successful we were at the Nominees Luncheon. If people have their thoughts clear enough, we stand a really good chance.”

And is Mechanic, who’ll be stationed in the control truck with ultimate authority over when Mark Shaiman’s orchestra comes in, ready to play rambling winners off?

“I look at that as a last resort,” he says. “We will do it, but we won’t do it unless we’re forced to. Will we have good citizens who obey the rules, or will they not care and say, ‘I’m gonna do what I wanna do, it’s my moment in the sun?’”

He shrugs. “If they do that, they’re going to get cut off.”